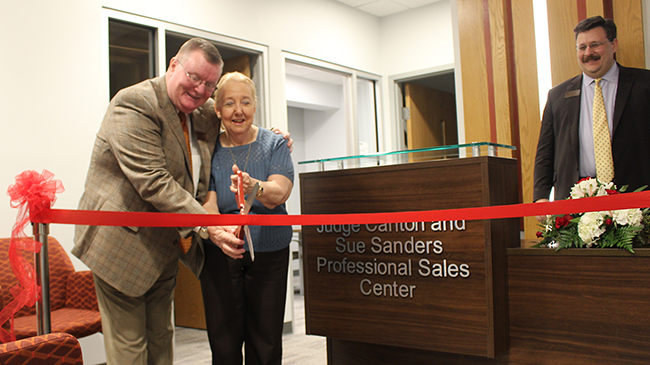 The state-of-the-art center will be home to the professional sales program, and will also serve graduates and the community as a venue for professional development and workshops. The sales lab will facilitate student learning through role play opportunities, while closed-circuit video equipment will enable instructors to record presentations and embed feedback within the video, greatly accelerating and improving the learning process. Students will be able to access their videos and instructor feedback from any internet-connected device.

Sales students will also be encouraged to hone and test their skills by participating in student sales role play competitions.

In opening remarks, Chancellor Dr. Ray Wallace characterized the center as “the culmination of the recognition of a great need in our area, the vision of how to address that need, and the hard work and planning necessary to bring that vision to life.”

The new learning space in Hillside Hall continues the unparalleled legacy of giving by Sue Sanders and her late husband, Judge Carlton Sanders, and represents a visionary investment in the ongoing dedication of IU Southeast to building careers and community.

The Sanders gift of $700,000 funded the construction of the Center, and will provide operating costs for three years, while also establishing an endowment to fund operations in perpetuity.

“Judge and Sue have always had IU Southeast near and dear to their hearts,” said Betty Russo, vice chancellor for advancement. “You only need  look around our campus for the evidence. They put their love of IU Southeast into action and have impacted thousands of students through their generosity.”

“Judge and Sue Sanders have been on the cutting edge with their philanthropic support,” said Uric Dufrene, executive vice chancellor for academic affairs. “The sales center will supply graduates to a profession where demand outstrips supply by a wide margin in the Louisville Metropolitan area.”

Recent research shows that 50 percent of all college graduates—regardless of major—will enter sales as their first career, according to Wallace. IU Southeast has anticipated this need with programs and new facilities to better prepare students for their transition to careers, even if those aren’t in business.

“Programs of study have been developed for business majors, those majoring in areas outside of business and for non-degree seekers who wish to pursue a certificate program,” Wallace said.

The ribbon cutting marked the end of one phase in the evolution of IU Southeast’s sales program, and the beginning of another.

The sales center had been on the university’s radar for several years. Chris Cox, associate professor of marketing and director of the center, created a sales program, lab and competition at a previous university, and he was eager to replicate his success at IU Southeast and keep on pace with the growth of sales labs nationwide (currently more than 100, according to Cox). Chancellor Wallace put the creation of a sales program near the top of his own agenda when he arrived in 2014, and the project moved inexorably forward.

“We needed to create graduates who possess a foundational selling skill set that allows them to achieve more and quicker success, reduces turnover and adverse hires and choices, and prepares them fully for more intensive, company-specific training,” Cox said. “The common ingredient in achieving all of those outcomes is a lot of role playing, and a meaningful and efficient feedback loop—the sales lab gives us those things.”

The opening of the center adds a new dimension to IU Southeast’s community focus. The center will work with community partners to provide non-credit programming such as sales seminars, training and professional development to the business and non-profit community, according to Wallace.

“The Sanders Professional Sales Center was created to draw high-ability students toward selling as a career, better preparing those students for early success in professional selling careers, and to connect them with sales professional in the Kentuckiana region,” Wallace said.