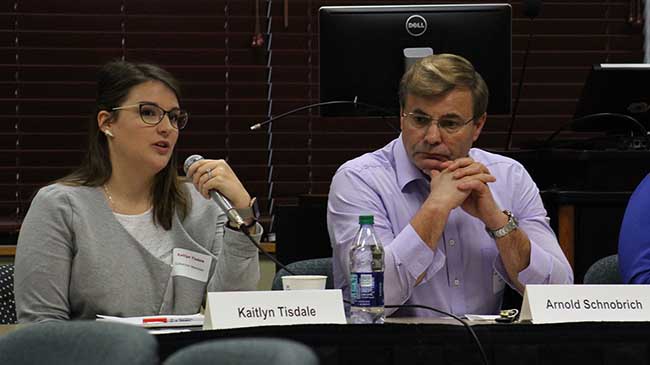 (NEW ALBANY, Ind.)—Scholarship and real-life experience are unanimous: internships increase a student’s chance of getting hired after graduation.

But how can organizations manage interns to make sure everyone is getting the most out of the experience?

That was the theme of the inaugural Employer to Employer event hosted by the IU Southeast Career Development Center (CDC).

The event brought professionals to campus for a breakfast and panel discussion on best practices for maximizing the value of internships.

Hartlage stressed the importance of having a dedicated structure in place, such as the College Relations Department at LG&E, which has turned the internship program into a dedicated recruitment pipeline that has seen 179 interns hired since 2011. A large part of the firm’s investment in interns involves cultivating professionalism through a system of orientation, networking events, mentoring, exit interviews and the occasional “awkward conversation.” The firm also assigns young professionals to mentor interns, an exercise that transforms them into ambassadors for the company.

Schnobrich emphasized the importance of giving interns meaningful tasks, rather than relegating them to the role of passive observers. For Schnobrich, internships not only benefit students and employers, but the entire community: By providing interns with real work, insights and responsibilities, employers can inspire these individuals to become invested in the local economic scene, rather than take their skills and move elsewhere. He also urged employers to devote sufficient time, thought and discipline to mentoring interns, and to give them a sense of how departments in complex organizations intersect and interact. This type of knowledge, Schnobrich said, is just as important, if not more so, as the specific type of knowledge required to succeed in a particular unit.

Tisdale described the ways that the Culbertson Mansion has leveraged students’ existing strengths and research interests to benefit both the site and the students. She detailed several instances in which student interns were given the latitude to lead projects that both expanded the range of student experience and resulted in a value added to the site.

Frederick, an IU Southeast alumna, recounted her internship at the Transit Authority of River City (TARC) in Louisville, giving an intern’s perspective on the process. As Frederick recounted, she had been assigned a large and challenging project, and as a result, she had been forced to master new skills. Now that she is in the position of hiring interns, she consults her own impressions in granting students significant autonomy and responsibility.

During the subsequent question-and-answer session, these and other themes led to a thoughtful and pragmatic discussion, which fulfilled the hopes of the hosts.

“We wanted to give employers a space to ask questions and discuss their challenges and insights among like-minded professionals,” said Danielle Beebe, director of the CDC.

Beebe led the creation of the event following a previous collaboration with Robert Shindell, president and CEO of InternBridge, Inc. and author of Total Internship Management, a leading-edge book on the subject.

The event, built around employers offering internship programs, with a panel representing firms of different types and sizes, was made possible by a grant from the Sustaining Talent, Engaging Partners (STEP) program at Indiana University.

STEP grants support programs focused on education and industry/employer connections and conversations, retaining students through employment within the state, and collaboration with internal and external partners.

“Our goal is to foster a connection between our students and alumni and our local community, and this event does exactly that,” Beebe said. “Ultimately, the best outcome will be something for everyone: for employers, an opportunity to recruit new talent and accomplish certain goals, and for students, the chance for connection and strengthening their experience so they can find a great job after graduation.”

Homepage photo: Brooke Hartlage of LG&E/KU responds to a question during the panel discussion of the Employer to Employer event.