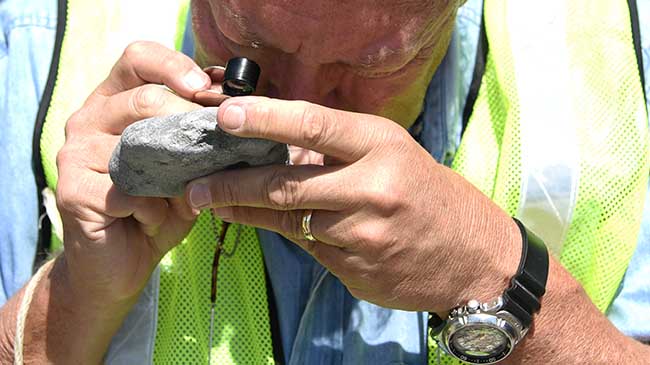 “He was our rock,” said Clint Franklin, senior lecturer of geosciences.

For many years since joining IU Southeast in the early 1990s, Mason literally was the geology department. With the persistence of tectonics, and a genius for accretion, he managed over time to cement together a group of instructors sharing his passion for discovery and inspired by his example of total commitment to student success.

A native of New Albany, Mason held a bachelor’s degree from Purdue University, a master’s degree from IU and a PhD from the University of Wyoming, where he worked as a research scientist before coming “home” to IU Southeast.

Mason was a distinguished researcher, and his scholarly background benefited countless students whom he taught or who co-presented with him at conferences,

Phil Asher, adjunct lecturer in geosciences, worked alongside Mason for 22 years, and has strong impressions of Mason’s style and importance.

“His enthusiasm and devotion to teaching filtered on over to those of us working in his department,” Asher said. “After 22 years, I was still learning how to be a better instructor from observing him.”

Through raising the bar and leading by example, Mason had a huge impact on the culture and morale of the department. 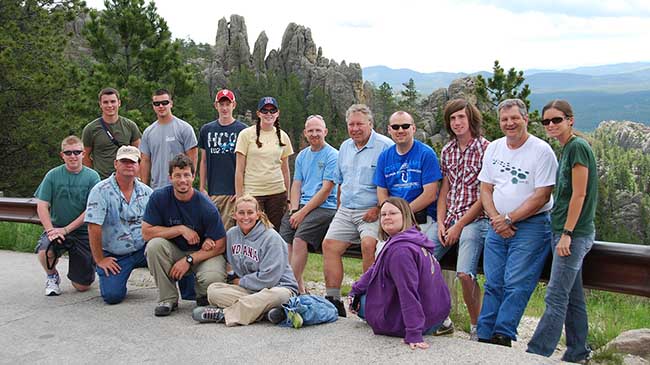 Dr. Glenn Mason ignited a passion for geosciences through field geology trips to locations near and far. Photo by Pam Mason.

Latham first met Mason in 2003, as an undergraduate with many interests but little direction. After the first class with Mason, she knew she would major in geography, and further conversations showed her the pathway to a career in the field.

“He opened up this new world of possibilities for me, and it was a complete fit because I was able to see to the first time that I could do something with my life that actually had more purpose than just getting a job and making money,” Lathem said.

Mason perpetually spurred Lathem, and all of his students, to look beyond their undergraduate diplomas.

“He believed it was not just important to teach the material but to help students know about the next steps beyond graduation,” Lathem said. “He stressed further education so they could have the opportunity to get the jobs they wanted.”

Mason’s devotion to students bore fruit at the annual Student Conference, when the sheer excellence of geoscience student posters and presentations was on public display.

Other aspects of his devotion went largely unseen—the extra unpaid hours, the door that was always open, the many nights he stayed late to print student posters, and the numerous students who went on to get advanced degrees and build careers in geosciences.

His connection with his students didn’t end with graduation, but persisted.

“He didn’t just want us to graduate, but to continue to work in the field,” Lathem said. “He wanted students to make a meaningful contribution to scholarship.” 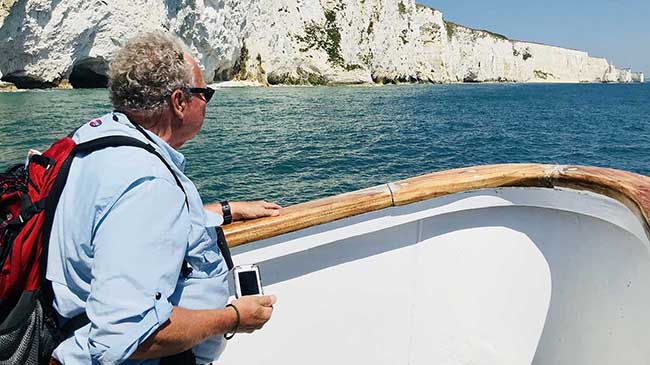 This past summer, Mason realized a long-held dream of leading a field geology trip to the “Jurassic Coast” of England. Photo by Jennifer Latham.

For Mason, experiential learning was an essential part of geosciences. As a result, he was devoted to travel, and to learning from travel.

Field geology courses brought students to Alaska, Arizona, Colorado, Hawaii, Montana, Nevada, Wyoming and other locales as close to home as the nearest road cut on I-64 and as far away as England.

According to Franklin, Mason’s determination to take the classroom outdoors was an exhilarating and formative experience for students—it’s what made many of them geologists.

Of course it wasn’t just the sun and sand that made these outings meaningful, it was Mason’s presence, his example, his way.

Mason and his wife Pam, who managed the logistical details on more far-flung trips, knew that these travels might be the only exposure that some of these students might have to the world beyond Southern Indiana, so they packed them with richness, encouraging students to dive in and experience local culture, cuisine, history and society. Most importantly, for Lathem, Mason treated the students with the same respect he accorded other adults. The boost in confidence from being taken seriously was palpable.

One student who felt this deeply is Dale Brown, now assistant property manager at Falls of the Ohio State Park in Clarksville, Ind.

Like Lathem, Brown found his way into geology via Mason, who recognized his passion and nurtured his talent, inspiring him to change his major.

Brown reckons he eventually amassed over 250 credits at IU Southeast during his undergraduate career, and easily half of them were in geology, pretty much all down to Mason.

As a veteran, Brown appreciated Mason’s attention to detail and high expectations.

“He didn’t make classes easy, he had standards,” Brown said. “The students always understood that you got out of it what you put into it.”

He also appreciated the boundless support and simple humanity of Mason, a person who helped all those in his orbit reach for and achieve more than they ever thought they could.

“Glenn got out of life what he put into it: a lot of love.” Brown said. “We all need at least one Glenn Mason in our lives.”

Homepage photo: Dr. Glenn Mason at the Grand Canyon of the Yellowstone, in Wyoming, during a field geology trip.