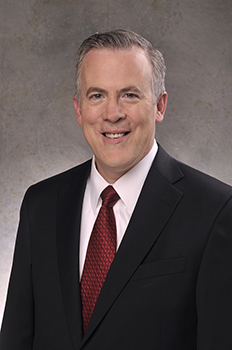 Vice Chancellor for Administration and Finance and Chief of Staff Dana Wavle.

Dana Wavle has been appointed chief of staff for the IU Southeast chancellor, in addition to continuing his role as vice chancellor for administration and finance.  In his expanded role, Wavle will provide additional support for the operation of the chancellor’s office, covering a wide variety of administrative and executive duties, special projects and priorities.  Wavle has served as the vice chancellor for administration and finance since January 2009.  Prior to his arrival at IU Southeast, he was the executive director of auxiliary services at SUNY Cortland and served as the president of the SUNY Auxiliary Services Association in 2007-08.

Wavle earned his bachelor’s degree in accounting from the State University of New York at Geneseo and his MBA from Le Moyne College in Syracuse, New York.  In December 2017, he earned an MSR (Master of Science in Recreation) from IU Bloomington’s School of Public Health, majoring in park and public lands management.  His capstone project, submitted and presented in fulfillment of the degree, was a comprehensive public land management plan for the Southeast campus. Wavle’s article on successful employee recruitment strategies, titled Talent Scout, was published in NACUBO’S Business Officer Magazine in February 2016.

Reflecting on his three-decade career in administrative and financial positions, Wavle said he is looking forward to his new role: “I have had the opportunity to support the chancellor’s office in a variety of ways over the last ten years.  I have also worked closely with key administrative units at the University level.  The knowledge and experience I have gained will be invaluable in my new role.  My motto in administrative affairs is to provide service and support behind the scenes.  That philosophy will not change.”

Wavle also values open communication, as evidenced by his budget presentations each summer.  He has attended and worked at public institutions for 27 years.

“I am passionate about the role of public education and will continue to support the campus community in any way I can,” said Wavle.

In his spare time, Wavle enjoys hiking on federal and state lands.  Dana’s wife, Sharon, works for IU’s Office of Online Education.  They have three sons – Nate, Dan and Josh.  Nate and Dan are IU alumni.  Josh will graduate from Floyd Central High School in May 2019.