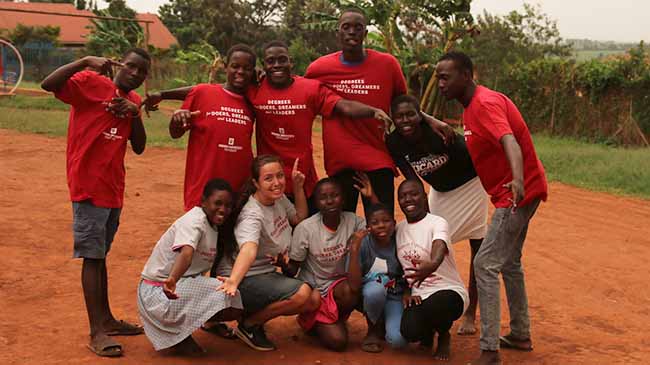 The class is SPCH-S 324, Persuasive Speaking. The village is Jinja, on the northern shore of Lake Victoria, known as the source of the Nile.

For their first class assignment, each student is required to donate one dollar to a common pool, which is rounded up to $25 by instructor Michael Abernethy. The students then give a speech on why they deserve to win the $25. This year’s winner was Emily Mitchell, a senior from New Albany majoring in communications and minoring in Spanish. In her speech, Mitchell told her classmates of her family’s involvement with Jinja, and their efforts to bring hope to the impoverished people there through missionary work and material improvements.

That family includes Emily’s mother, Dolores Sanchez Mitchell ’92, who majored in mathematics and minored in computer science at IU Southeast; Emily’s cousin Renata Kelly, a business major at IU Southeast; as well as Kelly’s mother, father and brother Josh, whose Sellersburg, Ind.-based company, LightUpToys.com, funds improvements at orphanages in Africa, Mexico and elsewhere, and has enabled children to attend school and college.

Mitchell stated that the $25 would be enough to provide 50 meals for the children in Jinja. That was good enough for her classmates to award her the prize.

The rules of the exercise require the winner to document the use of the prize for the intended purpose.

Since Mitchell wasn’t able to travel to Jinja to give the money to the kids in person, she passed it off to her cousin, Kelley, who was scheduled to fly to Uganda with the rest of the family later that week.

Kelly distributed the meals, then she made a video of the young people of Jinja thanking Emily and IU Southeast for the donation, and talking about their hopes and dreams for careers beyond the village.

Mitchell face-timed with the group during the video, creating a living link from a campus in Southern Indiana to a community in Africa.

Each year in our persuasive speaking course, students are required to donate one dollar for their first speech, for a total of $25. Students then give a speech on why they deserve to win the $25. This year’s winner was Emily Mitchell, whose family regularly travels to Uganda to work with impoverished children. She stated that the $25 would be enough to provide 50 meals for the children there! Since Emily was not able to travel to Uganda to deliver the money personally, she passed it to her cousin and school of business student, Renata. Check out the video Renata made of children from Uganda thanking Emily and IU Southeast for the donation. Go Grenadiers!

Mitchell’s speech was powerful and persuasive. In his class, Abernethy helps students not only become proficient persuaders, but develop analytical sensitivity to the strategies behind the rhetoric.

“Persuasion exists everywhere, from advertising to politics to religion,” Abernethy said. “In order to make informed decisions, it helps to understand the tools that are being employed to persuade you.”