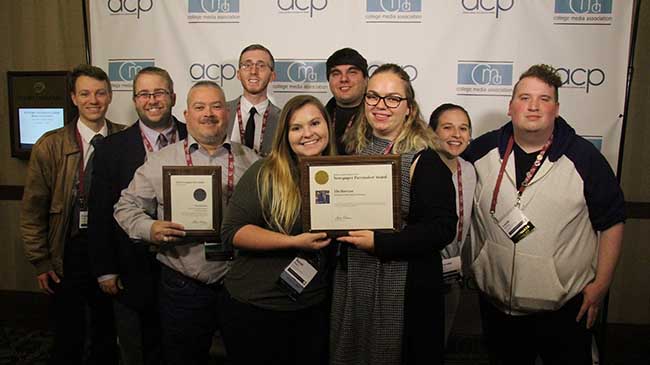 (NEW ALBANY, Ind.)–For the second time since 2015, The Horizon has won the Newspaper Pacemaker award from the Associated Collegiate Press for its work during the 2017-18 academic year.

The award was presented at the National College Media Convention in Louisville, Ky.

“The Pacemaker . . . is considered to be the Pulitzer Prize of college journalism,” said Dr. Adam Maksl, associate professor of journalism and media, and director of student media, which includes both The Horizon and Horizon Radio.

How significant is this achievement?

Of the 165 newspapers from around the country that entered the contest, only 11 won a Pacemaker, placing The Horizon in the top seven percent of college newspapers nationally.

“We are the only school in Indiana to have won a Pacemaker this year,” Maksl said.  “It shows you what a small group of people can accomplish when they’re dedicated to a mission of serving their audience and community.”

“To me, this award is confirmation that our staff and organization are the best of the best.” said Shannon Greer, co-editor of The Horizon. “To be a part of just 11 schools nationally recognized for this achievement is a great honor, and something that will hopefully inspire both current and future Horizon staff.”

“The best part about winning this Pacemaker is the validation for all the hard work we’ve put into the newspaper,” Magin said. “Everyone on staff is so excited to be able to put this stamp of approval on their resume as well as on job interviews in the future.”

The Horizon staff will celebrate their victory with pizza and cake at their weekly class/meeting, and there will be more festivities at the upcoming Journalism & Student Media Reunion.

While the Pacemaker may feel like a dream come true, Greer, Magin and The Horizon staff know that their success was built on hard work, long hours and deep reservoirs of dedication.

“A year ago, I felt the Pacemaker was so far from reach, I felt that you had to have a bigger staff and be at a bigger school with a more advanced journalism program to win that award,” Magin said. “But I was wrong, because one year after feeling so far from The Pacemaker, it’s now hanging up on our newsroom wall.”