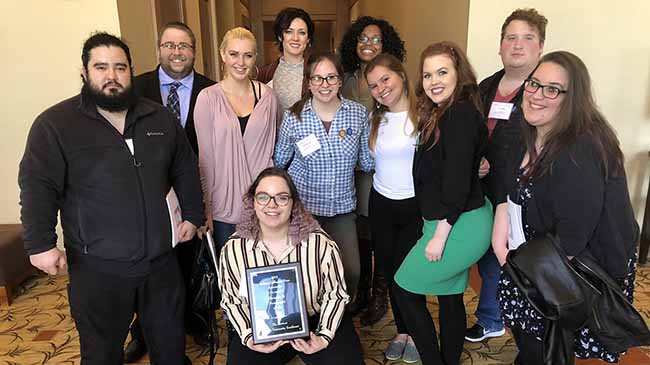 The 2017 Horizon staff poses with the Division II Newspaper of the Year award from the Indiana Collegiate Press Association. Photo courtesy of Shannon Greer.

(NEW ALBANY, Ind)–The Horizon is a finalist for a Pacemaker Award from the Associated Collegiate Press, for its work during the 2017-18 academic year.

The Pacemaker is considered the highest accolade in college journalism.

This year’s Pacemaker will be awarded at the upcoming National College Media Convention in Louisville, Ky., Oct. 25-28. The convention is the largest gathering of college journalists and advisers in the world.

This marks the second time the Horizon has been nominated. The newspaper won the Pacemaker in 2015.

The Associated Collegiate Press, a division of the National Scholastic Press Association, is a non-profit educational association that provides journalism education services to students, teachers, media advisers and others throughout the United States and in other countries.

“Winning the Pacemaker would validate all the nights we stayed in the newsroom until 5 a.m. the next morning, trying to put together a paper,” Magin said. “It would be something tangible that my staff and I could point out to future employers to show what an impact we had in the world of journalism.”

This validation may be particularly sweet, given the challenges the team had to overcome, according to Adam Maksl, associate professor of journalism and director of student media, who is faculty advisor to The Horizon.

“Both semesters last year we had a smaller than normal staff, so it was necessary for everyone to come together and work more efficiently to produce high-quality content,” Maksl said. “With much of our attention focused on building and launching Horizon Radio, being able to produce such high-quality content for The Horizon while expanding Horizon Media overall was especially impressive.”

For both Greer and Magin, the Horizon experience has been a journey of personal and professional growth.

As editor, Magin attended the 2017 ACP convention in Dallas, Texas, which she credits with rekindling her passion for journalism.

“This program helped me to be a better leader and a better journalist in general,” Magin said. “Even in my failures I learned from them and grew.”

For her part, Greer also attended the ACP convention in Dallas, as well as the 2016 APC gathering in Washington, D.C., where she heard speakers such as Bob Woodward and Edward Snowden. She also traveled to the nation’s capital to cover the presidential inauguration and Women’s March.

Greer sees journalism as a community full of diverse opportunities.

“There’s a variety of positions one can hold with a journalism degree, and an endless number of fields you can work in,” Greer said.

From setting editorial calendars and working with staff writers to managing the balance of print and online content and controlling the finished product for quality and accuracy, both Greer and Magin recall 2017’s achievements as substantial and formative.

“Winning the Pacemaker would confirm something I already know: The Horizon is comprised of an extraordinary, hard-working staff that continues to improve,” Greer said.