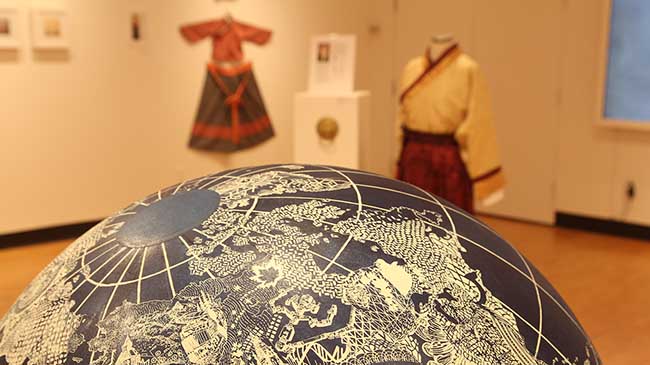 “Handheld Utopias” by Susanna Crum (foreground) and Hanfus by Kok Cheow Yeoh (background) are among the works presented at the Fine Arts Faculty Biennial Exhibition.

The exhibition runs until October 31 in the Barr Gallery, during normal opening hours.

Like their students, art instructors are constantly experimenting with subject matter, materials and technique, growing as artists, researchers and as teachers while illustrating the universal relevance of art as the ultimate problem-solving laboratory.

Debra Clem, professor of fine arts in painting, contributed two large paintings, one of which is a powerful self-portrait.

“Women have traditionally been objectified in visual art,” Clem said. “I want to paint women as they are, focusing on their strength, independence and humanity. I want their gaze to be confrontational, strong and courageous—I want them to be subjects, not objects.”

In her two portraits, Clem experimented with a new process, painting in a realistic style with traditional oils on Dibond, an aluminum composite normally used for commercial signage, primed with gesso and acrylic spray paint to create a more textured surface.

The surface gives her subjects a tactile quality that amplifies their humanity.

In part this serves his role as a member of the Chancellor’s Diversity Advisory Council.

“By infusing diversity into our society, we can reap the benefits of acceptance, talents, skills, innovation and creativity,” Yeoh said.

On a more personal level, Yeoh, who grew up in Malaysia as the son of a Chinese immigrant, uses his contribution as an exercise in creative archaeology, and a way to search for his core identity.

Yeoh has contributed three examples of the Hanfu, the traditional garment of the Han Chinese that was expunged from history nearly 400 years ago by the dominant Manchu culture of the Qing Dynasty..

Several years ago Yeoh taught himself to sew in order to recreate the Hanfu, using patterns gleaned from his research and tips from his aunt, who served as seamstress to the queen of the state of Kedah in Malaysia.

With traditional materials scarce or prohibitively expensive, Yeoh experiments with different patterns and fabrics, including remnants donated by his mother.

The final products in the show are made with polyester and cotton/polyester blends.

In “Handheld Utopias,” Susanna Crum, assistant professor of fine arts in printmaking, created a globe featuring designs, patterns and architecture from the banknotes of 195 countries, all rendered as a blueprint.

“It’s all a combination of centuries-old techniques, created with cartographic software and hand drawing/printing,” Crum said.

The work makes a statement about the ephemeral nature of maps and globes, which symbolize and express political power, education and scientific inquiry but which are quickly rendered obsolete by events.

“All images were drawn by hand in ink on film, then exposed photographically on paper that I attached to a cast plaster sphere,” Crum said.

A photographer friend in Rhode Island supplied useful tips about the optimal type of paper to use for the cyanotype, which needed to be distorted in order to conform to the spherical shape.

“The paper needed to be thin, flexible, and really strong to hold up to the photographic processing, gluing and burnishing to the globe,” Crum said.

To create the sphere itself, Crum consulted professional artisan globemakers in Germany and France, as well as 17th and 18th century treatises on this arcane craft.

The Fine Arts Faculty Biennial Exhibition is free and open to the public.