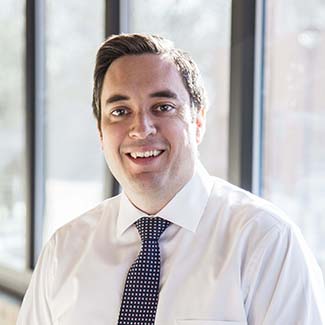 When it comes to classroom innovation, John Ross has a simple mantra:

“It’s fun to do different.”

As assistant professor of management in the School of Business, Ross teaches small business management, organizational behavior and leadership.

But these aren’t your grandfather’s business classes.

They are full of activities and games and reflection, with students often learning by teaching.

“Times have changed,” Ross said. “This is now an area that is ripe for innovation.”

“I want to inspire learning,” Ross said. “I don’t want to just give students a bunch of material, I want them to leave at the end of the semester saying, ‘This is so cool what he taught us, that I want to learn more.’”

How do you do this?

“You don’t do it by offering up the same thing every day,” Ross said.

Instead, Ross throws change-ups, introduces spices to the menu, shows students that the subject, and learning itself, can be fun.

Ross recalls that one of his professors had a word for this approach: edutainment.

Sounds unacademic. Yet it’s the essence of pragmatism tuned to the times. Fun leads to engagement, engagement leads to creativity. It’s about showing students that this topic isn’t dry and dusty and disconnected from their world. It’s about showing them that, in Ross’s words, “Business is the coolest thing ever.”

Why is it cool? Because once you understand what it is, you can use it for anything.

“Bring me anyone who doesn’t know what they want to be when they grow up, put them in my class, and by the end of my class, they will know,” Ross said. “At the end of the day, it’s all about business.”

The magic ingredient that Ross provides is connection to each student’s ambitions, aspirations, dreams. He welcomes students from all other faculties, because he understands business as a Rosetta stone for success in every field. Theater arts, ceramics—you name it, business is applicable, because being a success in any field, in the real world, requires entrepreneurial skills.

“Business is the perfect addition to any degree for everyone,” Ross said.

Fish out of water

Ross comes by his eclecticism honestly. A first-generation college student, Ross is proud of his blue collar background.  His undergraduate degree was in organizational studies, and he took this broad humanistic world-view into increasingly focused graduate and postgraduate studies in finance and management

Along the way he founded a store that sells used music, movies and games, worked as program manager for musical events, taught history and English in a middle-school, and led engineering teams in the aerospace industry. That’s right, aerospace.

Ross’s five-year stint with Lockheed Martin Aeronautics as supervisor and quality project lead on the F-35 fighter jet is a window on his personality and approach to the classroom.

Ross joined Lockheed out of grad school because he liked what he saw of the genial corporate culture at a job fair. The employees seemed to enjoy their jobs.

And they did. But it turned out they were world-class brainiacs from leading engineering schools who, it seemed, knew everything about everything. And Ross soon felt like a fish out of water (his words).

“I fell victim to the impostor syndrome,” Ross said.

But he soon learned to value his differences—his modest background, his business degree—as assets. From there, he soared, studying organizational dynamics and forging novel formulas for team success.

In the classroom, he encourages students to embrace their own uniqueness and put it to work for themselves. Yes, it’s fun, but it’s also instructive and ultimately beneficial to the organization. Recognizing and actualizing unique abilities, however irrelevant they may initially appear, contributes to positive group outcomes.

“Teamwork is the same, no matter what industry you’re in,” Ross said. “What it takes to motivate, energize and unify, whether it’s in the classroom, healthcare or retail, it’s all the same.”

Over the summer, pairs of students co-taught classes with him. They learned to develop a PowerPoint and an activity, lead a discussion, and even design a test.

Ross met with each team for three to four hours, to work through these components, and to encourage reflection.

The students learn to transform fun into a learning activity, and vice versa.

They also learn to extract meaning from their personal experiences. 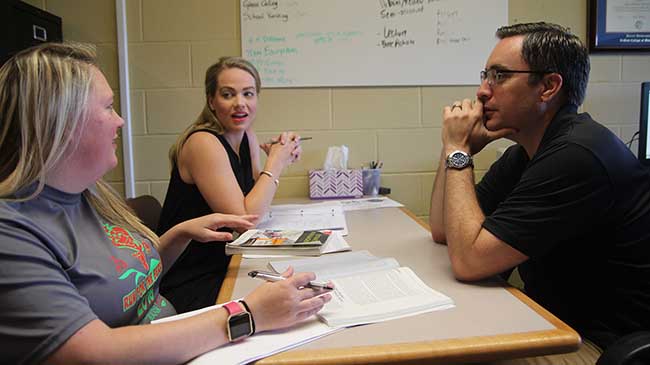 MBA students Ashley Blackerby and Megan Pfeifer brainstorm with John Ross during a preparatory meeting for an online class they will co-teach.

In one preparatory meeting, Ross brainstormed with MBA students Ashley Blackerby and Megan Pfeifer about insider knowledge they may have.

“Everyone knows about what’s going on at Apple,” Ross said. “What can we learn from where you have worked?”

Pfeifer and Blackerby share insights and observations about vertical integration at Thornton’s and the impact of mergers at Humana.

Ross listens intently, asking questions and suggesting avenues of inquiry. This could easily be mistaken for a tutorial at Cambridge.

In the course itself, the personal experiences of Pfeifer and Blackerby bring reality and relevance to the other members of the online class, and help the two co-teachers to make conceptual information more usable.

The human side of business

At Lockheed he developed what he calls the unity principle for building an exceptionally successful team He created a formula that has been successfully applied in over 100 teams.

Originally, he tested the principle in manufacturing. Quickly discovering the successful nature of the formula he then applied it to fields ranging from healthcare and education to retail and sports. The research absorbed him in a way that his work couldn’t.

It wasn’t long after the emergence of the unity principle that Ross left his high-powered job at Lockheed to pursue doctoral studies and, on the advice of a good friend, embrace teaching as his calling.

In his classes, Ross works to create the ultimate super-team, that of instructor and students, pooling expertise and experience, driven by passion, sustained by hope.

“Business is all encompassing,” Ross said. “It’s how the world works. So if you want to understand the world, come to business.”