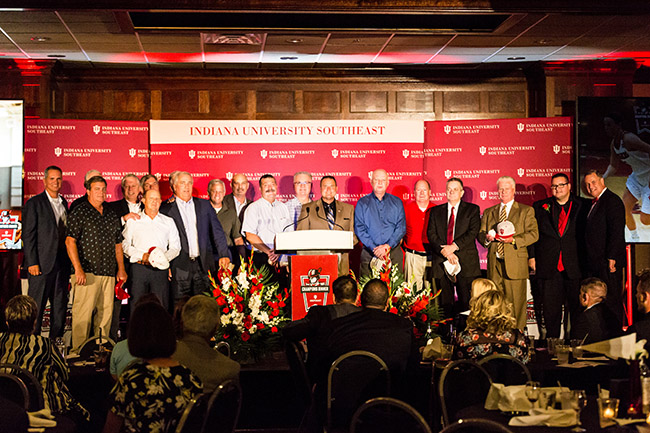 The event raised more than $40,000 for student-athlete scholarships at IU Southeast and had more than 320 guests in attendance.

“Once again, I am so grateful to the people of this community for all their generosity and support,” Director of Athletics Joe Glover said. “This event has grown each year and the student-athlete experience has also improved because of everyone’s support. I can’t thank our sponsors and those in attendance enough for making this event so successful every year.”

Caitlynn Pfaadt was recognized as this year’s Jim Morris Champions of Character award winner. The award is given to a student-athlete who exemplifies strong moral character, sportsmanship and the core values of the NAIA’s Champion of Character Program. Caitlynn was a three-year member of the Grenadier volleyball team and was a co-captain her senior year. She was also the vice-president of the IU Southeast Student-Athlete Advisory Committee and was an active advocate for her fellow student-athletes in the group’s mission to improve the student-athlete experience at IU Southeast.

Joe Jackson and Annie Thomas were honored as the Male and Female Athletes of the Year for the 2017-18 academic year.

Joe Jackson, a senior forward from Louisville, Ky., was an NAIA All-American selection in 2017-18 and River States Conference First Team honoree. He helped lead the Grenadiers to the championship game of the River States Conference Men’s Basketball Tournament and West Division title. The Grenadiers advanced to the NAIA Men’s Basketball National Tournament for the second-straight season and defeated No.17-ranked Stillman College before falling to No. 4 Indiana Wesleyan.

Jackson led the nation with 92 blocks and 2.8 blocks per game. He averaged 14.2 points per game and 8.2 rebounds. He also became the Grenadiers’ all-time rebounding and blocked shot leader during his senior season.

She averaged 14.7 points, 3.4 rebounds and 3.8 assists per game. Thomas led the Grenadiers in scoring, assists and steals and ranked No. 4 in the country with 3.3 steals per game.

Libbie McMahan and Terry Spitznagel were honored as this year’s Grenadier Gratitude award winners. The Grenadier Gratitude Award honors those who have made significant contributions of time and resources to the University’s athletic programs. Both have volunteered as the official scorers for the women’s and men’s basketball programs for more than 40 years each.

Mike Schultz was recognized with the Distinguished Athletic Alumni award. He was a member of the first baseball team at IU Southeast in 1979 as well as the first team to win a district championship in 1981.

Schultz has had a distinguished career fundraising for various non-profit groups and was most recently the Vice President of Development and Stewardship for the Community Foundation of Louisville where he leads the efforts to engage existing donors and build philanthropic resources that lead to more vibrant communities now and for generations to come.

Mark your calendars for next year’s Champions Dinner which is set for August 17, 2019 at Huber’s Orchard and Winery.