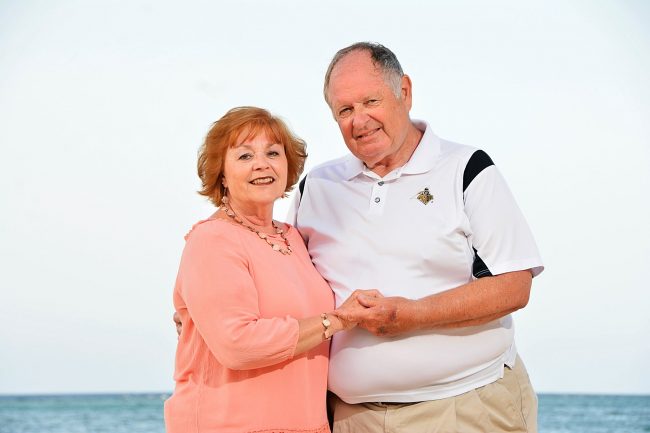 “We both took classes at IU Southeast when it was still in Jeffersonville and have been inspired by the way it has grown,” said the Spitznagels. “The university has always been a part of our lives and we wish our involvement to be a permanent one.”

A two-time IU Southeast graduate, Jane received her Bachelor of Science in elementary education in 1978 before gaining a Master of Science in counseling in 1985. Shortly after graduating with her master’s degree, Jane joined the staff of IU Southeast as the Director of Alumni Relations, a position she held until 1997. Upon leaving that role, she worked in the University Division (now known as the Advising Center for Exploratory Students) for several years, before retiring in 2011.

Terry took classes at IU Southeast before receiving his Associate of Science in mechanical engineering technology at the Purdue Polytechnic Institute in 1980. Terry began volunteering in the athletics department at IU Southeast 35 years ago and continues to keep the game book today.

“Terry and Janie Spitznagel and their near endless contributions to IU Southeast athletics have been impactful beyond measure,” said Joe Glover, director of athletics at IU Southeast. “One of our longest volunteers and supporters of student-athletes, the Spitznagels continue to give of themselves to allow our program to grow. The creation of this scholarship is another in a long line of contributions from the Spitznagel family that will continue to help shape the future of Grenadier athletics. We are very fortunate to have their support and I am personally thankful to call them great friends.”

The scholarship will be awarded to a male and female sophomore student-athlete that demonstrates financial need and meets the minimum GPA requirements. Special consideration will be given to underrepresented populations, including but not limited to financially challenged students and students with diverse cultural experiences. Preference will also be given to athletes majoring in education.

“Being involved in any extracurricular activity requires a lot of time and dedication on the part of the student,” said the Spitznagels. “Hopefully, this scholarship will allow athletes to give their full time to their studies and their sport without having to worry about finances.”