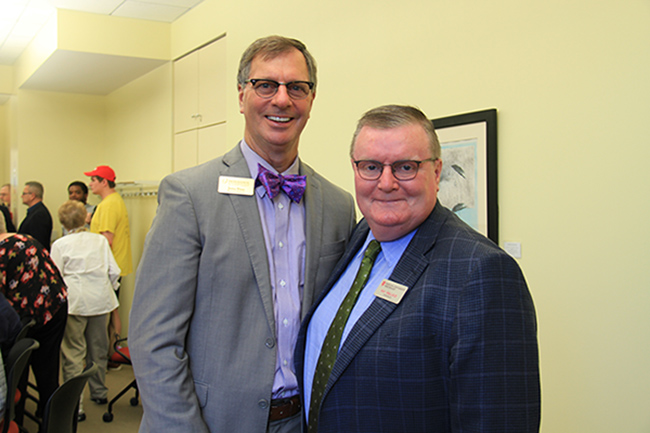 “It all started on March 12, 1947, when students in an English class produced the first issue of The Southeastern Student as part of what was then the Indiana University Jeffersonville Extension Center, the first regional campus to have a student newspaper,” said Adam Maksl, associate professor of journalism and current advisor to the student newspaper. “Though it changed its names over the years, the student publication – now called ‘The Horizon’– has consistently been a source for campus news, information and opinions.”

“There’s a lot of history in the student publications at IUS that we felt was worth preserving,” said Jerry Finn, executive director of the Horseshoe Foundation. “Digitizing it makes it searchable so that others in the community can look back at it and know what’s been going on over the years.”

During the celebration, several guest speakers including previous student newspaper advisors Jim St. Clair and Ron Allman highlighted interesting editions from the years and reflected on their experiences.

“A lot of blood and sweat goes into the production of a newspaper,” said St. Clair who served as the advisor for the paper for several years. “It was very rewarding being an advisor to the Horizon. Students make mistakes but it’s part of the learning process, the goal is to keep trying to improve issue after issue.”

The public can now view the continuous improvement of the issues over the years, from the early editions, which were only one to two pages, to more recent and updated versions, on the LibGuides at IU Southeast website.

“This archive is a tremendous step in preserving a core part of the history of IU Southeast,” said Ray Wallace, chancellor of IU Southeast. “Thank you to the Horseshoe Foundation for their generosity in making this happen.”