(NEW ALBANY, Ind.)—The next episode of “Who Do You Think You Are?” on The Learning Channel (TLC) will have a strong IU Southeast presence.

Dr. Kelly Ryan, associate professor of history and dean of the School of Social Sciences, will deliver historical insights for the episode’s focus, the actor Jean Smart.

“Who Do You Think You Are” is a reality show that illuminates the ancestry of celebrities. Over the past ten seasons, the show has led the likes of Spike Lee, Cindy Crawford, Tim McGraw, J.K. Rowling and others on journeys of discovery during which fun, exciting, and sometimes life-altering facts are revealed.

In the upcoming episode, Smart, an Emmy-nominated performer and household name for television and film audiences through her roles in “Designing Women,” “24” and other hits, is poised to discover truths about an ancestor who lived in Massachusetts in the 1600s. 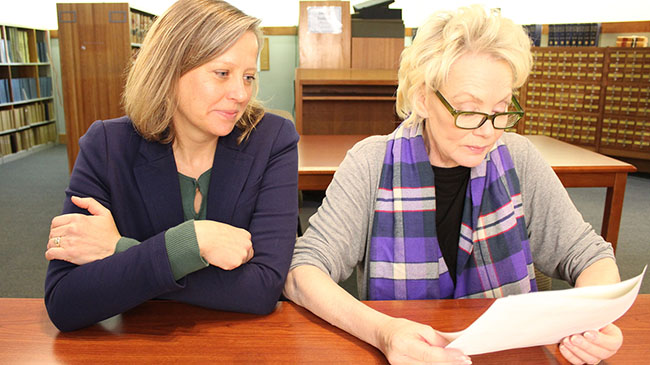 Dr. Kelly Ryan (l), associate professor of history and dean of the School of Social Sciences at IU Southeast, with actor Jean Smart at the Massachusetts Archives. Photo © TLC.

How it works: Researchers from the production company scour genealogical records to build the story on a featured celebrity’s ancestors. Then academic experts are brought aboard to establish the historical context for the documents and anecdotes that have emerged. The celebrities are then walked through their own distant genealogical past, uncovering the lives of people who have been involved in important and exciting events.

Ryan, a specialist in the areas of race, gender, sexuality and violence in early America, is the author of the book, Regulating Passion: Sexuality and Patriarchal Rule in Massachusetts, 1700-1830 (Oxford, 2014), which cemented her authority in the field of colonial history. She had worked with TLC in the past, on a project that had not come to fruition. They called on her expertise again for the story of Smart’s eighth paternal great-grandmother.

In the episode, Ryan accompanies Smart to the Massachusetts Archives in Boston to look at documents that shed light on Smart’s ancestor. Ryan helps to paint a picture of the world from which the documents spring, touching on gender and class relations, poverty, and the power of churches, particularly that of the Puritans.

Smart approached the project with wonderment, a deep interest in learning more about her family and a great eagerness to dive in, Ryan recalled.

In the archive, she handled the documents with real reverence.

“I’m used to handling these 300- to 400-year old documents, and parsing through them, seeing them more as problems to be solved than as treasures,” Ryan said. “It’s nice to see what the experience is like for someone doing something like that for the very first time.”

Ryan believes the celebrity-focused show is an engaging way to make history more palpable and relevant, especially for a period of time like the colonial or Revolutionary eras, which may not be as familiar as the Civil War.

“People are drawn to this show because they love genealogy and love to see their connections to the past through these other individuals,” Ryan said. “Everyone knows they have ancestors, and this format brings history to life in a different way.”

The TV experience is a bit of a discovery for Ryan as well. While her expertise is definitely needed, she respects the amount of research conducted by the production team, and appreciates narrative nuances that can differ from those of the academic historian.

“Academics most often want to find out what’s novel or what will add to our professional knowledge of history,” Ryan said. “But these stories are the real deal, and they’re what drive most people to learn about history, so that’s a reminder to me to make sure to value the role of the individual.”

Humanizing history is one way to keep it not only lively, but endlessly new, as it becomes a story of the choices that people make, and the impact of those choices on the course of events.