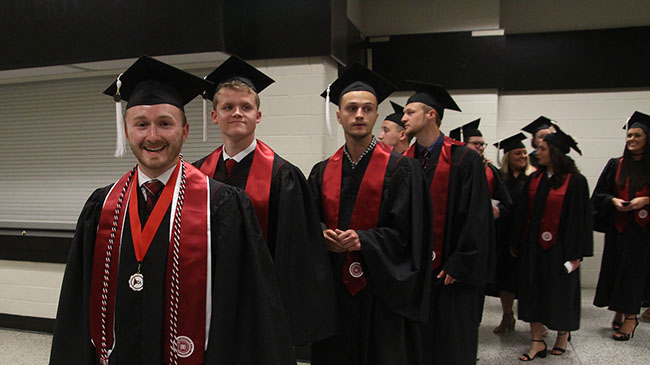 The Fellowship will allow Howard to serve 12 months in the office of the Governor of Indiana and various other state agencies.

Governor’s Fellows participate in the the daily activities of state government, complete special projects, travel to observe how work in the Capitol translates into action throught the state, and experience firsthand how policies are made, according to the program website.

They receive a competitive salary and benefits.

For Howard, this award caps a remarkable student career at IU Southeast, and points the way forward to an effective and rewarding life in the public sphere.

Howard completed his undergraduate studies at IU Southeast this spring. He dual-majored in political science and economics, with minors in Spanish, pre-law studies and international studies, with a concentration in Latin America.

This breadth of knowledge is a reflection of Howard’s global vision and commitment to meaningful action across cultural and political divides.

For Howard, political science isn’t just a major. It’s a way of life.

He first became interested in the subject in middle school, and followed the 2008 elections closely, his passion inspired by his grandmother and teachers at Silver Creek Middle School. He became more actively involved while at Silver Creek High School. He credits his teachers there, especially Ms. Sharon Neal who taught AP history in his junior year, with sharpening his interest in politics as a career path.

He served as vice president of student government, chairman and sergeant of arms of the College Republicans and chairman of the Model United Nations. He was also president and vice president of the Economics Club, and a committee member of the Community Foundation of Southern Indiana Scholarship Committee. 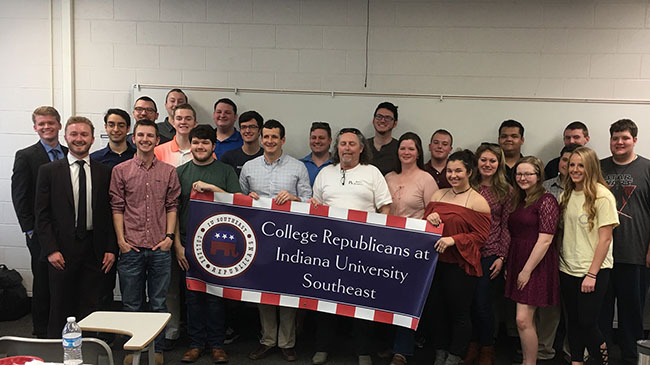 He leveraged experience and networking skills from these many efforts to prepare for his current position as diversion and deferral coordinator at the Office of the Clark County Office Prosecuting Attorney in Jeffersonville, Ind.

Here, over the past year, he has created agreements for people who commit criminal misdemeanors and lower-level offenses, agreements that give them a “second chance” to avoid immediate incarceration.

Howard has grown through these experiences, all of which were inextricably connected to his academic life.

“My studies at IU Southeast have helped me prepare for these jobs and internships by giving me a deeper understanding of the political process and how our system of government works,” Howard said.

Jon Bingham, senior lecturer in economics, experienced Howard as a student in his introduction to macroeconomics and business statistics courses, and also as a leader in the Economics Club, for which Bingham serves as faculty advisor. He recognized in Howard a positive disposition and pro-active approach to life that drives him to seek out, and masterfully integrate, a wide range of opportunities.

“He balanced academic and extra-curricular responsibilities by pouring himself into both aspects fully, rather than using one aspect as an excuse to sacrifice the other,” Bingham said. “Double-majoring while also seeking significant work and leadership experiences not only locally, but also state-wide and even in D.C. is an aggressive and impressive feat.”

Of all the skills he has acquired along the way, Howard values especially his growing ability to see, appreciate and respect different sides and perspectives.

It’s a quality that stood out to his instructors, including Jean Abshire, associate professor of political science and international studies, who taught Howard in international relations and Asian politics.

“I liked having him in class because he was curious and thoughtful about the material and really willing to engage with ideas,” Abshire said. “He had things to say but didn’t dominate, rather he would really contribute to a discussion.”

That inclusive view, rooted in the willingness to listen, consider and challenge one’s own preconceptions, is key to Howard’s very personal approach to political engagement.

“Helping people understand why it is important to not only vote, but to engage in the political process is more important than ever before,” Howard said.

He sees the political process as critical to several causes, most prominently the conservation of the natural environment.

“It is vitally important for humans to understand how precious our world and our own environments are, as we continue to pollute and exhaust our resources at a rapid rate,” Howard said.

From the macro to the micro, Howard finds a way to make connections that help people believe they can make a difference.

“I find it critically important for people to have a high and healthy self-confidence level in order to be successful and to pursue their own life goals,” Howard said.

That highly personal approach made Howard a charismatic and positive presence in campus life.

“At the time he took over as president of the Campus Republicans, we were struggling to bring four or five people to a meeting,” Wert said. “Last year, with Roger as president, we had 15-20 people at every meeting, and almost every week, there was a guest speaker from Republican politics, from Governor Holcomb to candidates for the U.S. Senate.”

According to Wert, Howard’s skills and engagement were rewarded with the deep and abiding respect of his peers. 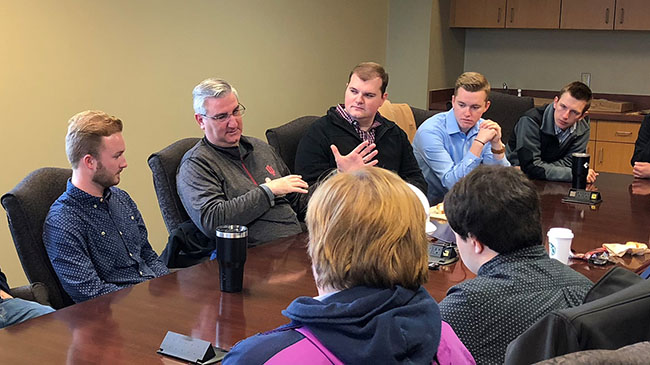 “A government by the people, for the people,” Howard said. “It remains important to protect this idea and teach people the value of staying engaged in the political process in order to maintain a government that works for the people.”

For Howard, the future is bright. After completing his fellowship, he plans to serve as a commissioned officer in the U.S. Navy. Ultimately, he would like to pursue a master’s degree, possibly in law, and join the U.S. Department of State.

“I want to use my education in economics and political science in a practical way in order to try my best to truly help people in a smart and efficient way,” Howard said.