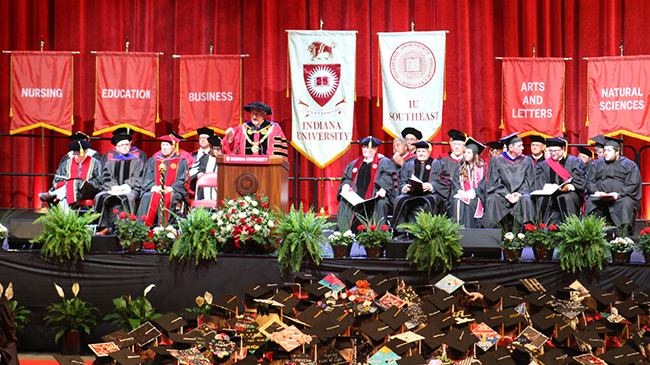 “You, the members of the Class of 2018, are on the cusp of actualizing IU Southeast’s vision to shape the future of our community,” Chancellor Ray Wallace said in his remarks to the class. “You are this region’s next leaders, next innovators and next creative minds. You are our dreamers. You are our doers. You are our future.”

Hayley Love, who graduated with a Bachelor of Science in Nursing degree with minors in communication and psychology, delivered the class response.

Love challenged her fellow graduates to test their abilities and stretch their limits, even when it means welcoming failure.

“If you never learn how to fail, then you will fail to learn,” Love said.

She urged them to maintain an empowering mindset, to transform anxiety and self-doubt into determination and accomplishment.

“Looking at every situation with a positive attitude will provide you with the best outcome and greatest growth,” Love said. “Not to mention, positivity is contagious.”

The Class of 2018 ranges in age from 20 to 66, and hails from 33 Indiana counties, 11 U.S. states and 15 countries of origin. Thirty-five percent of these candidates became the first in their families to attain an undergraduate degree.

IU Southeast has awarded nearly 35,000 degrees over the past half century.

Robert Lanum, attorney and former member of the Indiana University Foundation Board of Directors, as well as the IU Southeast Board of Advisors, whose philanthropic efforts have improved the quality of life in the region and the educational opportunities on campus, received the honorary Doctor of Human Letters degree.

In concluding the ceremony, Indiana University President Michael A. McRobbie challenged the students to carry the benefits of an IU education into the world.

“The reputation of Indiana University depends on your continued commitment to the values, knowledge and skills that you have learned here,” McRobbie said.