(NEW ALBANY, Ind.)—Bellydancing, Argentine tango and food from around the world highlight a rich and varied program for this year’s International Festival at IU Southeast.

The Festival takes place Tuesday, March 20 from 5 to 8 p.m. in the Hoosier Room.

A highlight of the campus year, the International Festival is organized by the international programs committee and becomes a reality through the tireless contributions of nearly two dozen faculty, staff, student and community volunteers.

This year’s co-directors of international programs and the festival are Anne Allen, professor of fine arts, and Valerie Scott, senior lecturer in psychology.

From the beginning, Allen and Scott wanted to make this year’s festival stand out. They brought in more performing groups from a very wide range of cultures, including Hawaiian Hula & Ora Tahiti, Kuvebo! West African Drum and Dance, Hellenic dancers from the Assumption Greek Orthodox Church in Lyndon, Ky., and Reggae favorites PMAsound.

“Students come to a university for a broadening of their education and horizons,” Allen said. “Many of our students cannot take full advantage of the study abroad option we offer, so the festival helps bring the world to them.”

Music and dance form the backbone of this year’s International Festival.

Real Live Actual Bellydance, of Louisville, Ky., has prepared a dynamic show that will present several different styles of bellydance, including Egyptian, Greek, classic American cabaret and one piece that is derived from American pop culture.

The presentation highlights the incredible diversity of bellydance culture.

“Bellydance finds its roots in the Middle East, but is has developed and expanded into an ever-evolving art form that is performed, studied and shared the world over,” said Celestina, co-founder and lead choreographer of Real Live Actual Bellydance. 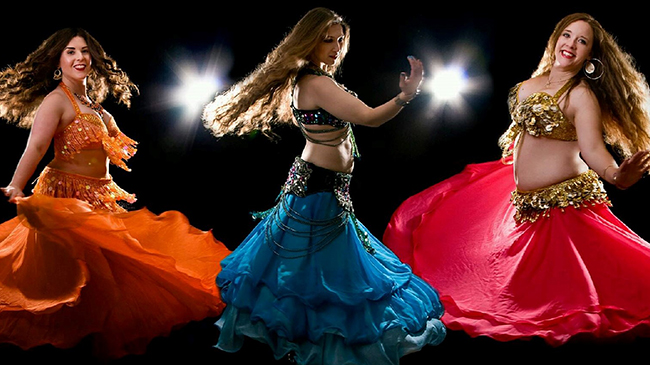 Dancers from Real Live Actual Bellydance in Louisville bring a celebration of life.

The three women involved in the group, including dancers Celestina and Romana, and photographer Gina, conjure the many moods of bellydancing at a variety of venues in and around Louisville, including the WorldFest and the Kentucky Center for the Arts, presenting the dance authentically in a way that is accessible to all.

“Not only do we love sharing this beautiful art form with the world, but we also thrive on spreading awareness about the cultures from which the dance derives and the positive influence the dance has on self-esteem and self-image,” Celestina said. “Belly dance an art form that celebrates life.”

A milonga can be many things: a type of music, a place, a dance.

For the members and friends of the Louisville Tango Festival, it’s a social dance party in a home, restaurant or dance studio built around tango, the impassioned dance that arose from the streets of Buenos Aires to become a global sensation.

Tango’s popularity in Louisville is down to two dancers, Andy Blair and Christy Byers of Blair’s Ballroom, who traveled frequently to Argentina and have crafted an approach that respects tango traditions while giving it a looser, local feel.

Tango is revered as a dance, but it is more more, as Paul Downs, assistant director of the Louisville Tango Festival, will tell you. Much more. It’s a sensibility, a look in the eyes, a play of passion and restraint, a way of life.

It is also a history. Born of the poor and ethnically mixed neighborhoods of frontier Buenos Aires 150 years ago, the dance and the music that accompanied it conquered the dance halls of the world in the first half of the 20th century, only to be driven underground after a military coup in 1955. Here it languished in memory until the dictators were gone, in the 1980s, when it was revived in competitions, in music, in movies, on ice, as well as in the streets from which it had sprung. 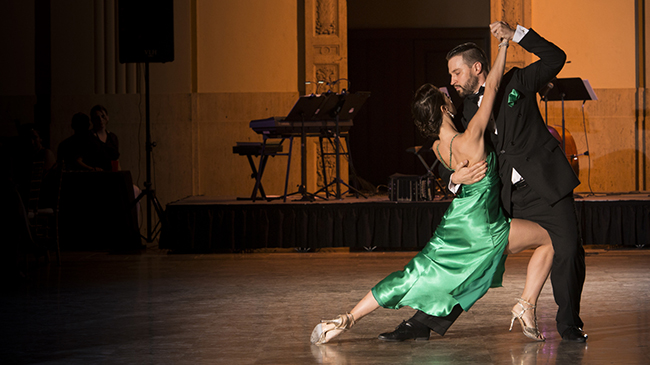 “The difficulty of tango and the intricacies of the dance, when combined with the deep social culture associated with tango makes it very popular among many cultures,” Downs said. “The local community has dancers from dozens of countries.”

Enough that every year the city hosts the Lousville Tango Festival, a small taste of which will be offered at IU Southeast.

“The intimate communication between two dancers in tango is unlike any other dance,” Downs said. “There are traditions and rules that go back decades and add to the mystique of the tango culture, and the social aspect of a diverse group of friends coming together to share makes tango special.”

Luck of the Irish

Louisville also boasts a small but thriving Irish dance scenem, represented by the the McClanahan School of Irish Dance.

“My mom’s family is from Ireland, so she knew a lot of other Irish families with kids, and that’s how I started,” Ackerman said.

In 1993, Ackerman founded the school with another dancer friend from college, and it has been a focal point for the Irish community ever since. Seasonal family-friendly gatherings with music and dance, known as feises and ceilidhs, are hosted by the school with the sponsorship of arts foundations, Hibernian orders and local publicans.

Bursting into global consciousness via “Riverdance,” Irish dance draws children and adults alike with its potent blend of muscle and magic.

“I love that it’s a great mix of so many things: it’s very structured but artistic, graceful but athletic, and seems easy but in fact it’s very challenging,” Ackerman said.

With catchy music and irresistible rhythms, hard-shoe dancing appeals to people across cultures.

“There are so many life lessons in Irish dancing but the two that stand out to me are: enjoy or be in the moment, and remember that hard work does beat talent!” Ackerman said.

A year in the making, the International Festival brings people together before it even takes place, both on and off campus.

Co-director Scott visits as many festivals as possible to line up dance and music performers. And there are criteria for the food, which must not only taste good and provide a sample of global diversity, but also deliver a well-rounded meal—as well as an educational experience.

The organizers recognize the support not only of Conference and Catering, but also of the IU Southeast Ogle Center, Choong Sung Taekwondo, The Irish Rover, Wiltshire Pantry, and Aladdin’s Cafe.

In addition to the performances, 21 internationally oriented groups from the community will staff information tables, joining campus groups in promoting their cultural and educational offerings.

The organizations represent Cuban, Islamic, Scottish, Turkish, and other traditions, as well as IU Southeast French and German clubs, refugee ministries, the IU Southeast Center for Cultural Resources, and many more.

“It is not always evident how diverse Kentuckiana is,” Allen said. “Louisville is home to thriving immigrant communities, and letting our students and guests see the variety of organizations focused on international issues helps them experience a global world, and provide information on volunteer opportunities.”

“The aspiration of the international festival is to transcend the walls of the campus and to embrace the surrounding community organizations, members, and individuals,” Scott said. “Ultimately, the International Festival directly aligns with the campus mission, which includes appreciation and respect of diversity, and its core value of connectedness, which seeks to engage and support the local and global communities to which we belong.”

To wit: all will have the opportunity to step behind panels painted in traditional garments and greet onlookers, courtesy of the IU Southeast Center for Cultural Resources (CCR).

“The IU Southeast International Festival and CCR share a common mission: an acceptance of and appreciation for all people,” said CCR Director Claudia Crump.