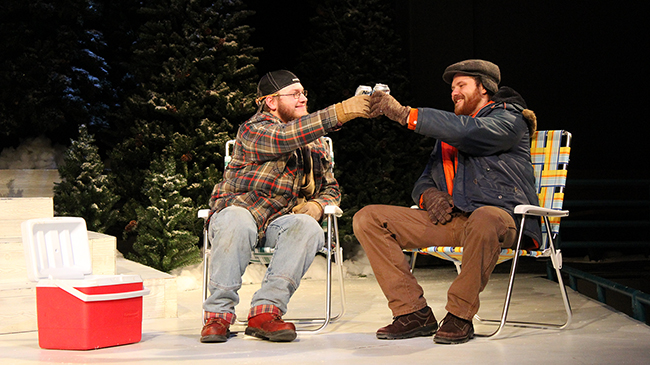 Actors Shawn Lee and Wes Seiderman in the scene, They Fell. Photo by Rebekkah Meixner-Hanks.

(NEW ALBANY, Ind.)—It’s the dead of winter, and love is in the air.

At least that’s the way it happens in the IU Southeast Theatre production, “Almost, Maine,” by John Cariani. This weekend affords audiences one last chance to see the play at the Ogle Center’s Robinson Theater.

“Almost, Maine” is a series of nine independent vignettes on the theme of love. Each scene contains a new set of characters who go through the experience of falling into it or out of it.

By turns hilarious, tense, poignant and droll, the play gives both performers and audience a lot to think about.

It takes place in the fictitious (but plausible) town of Almost, Maine, in the far north of the state. It’s a place almost entirely cut off from the rest of the world, where the winter days are short and the northern lights create moments of mystery. It is in one of these moments, at 9 p.m. on a Friday night, that the scenes are meant to be taking place, simultaneously in different parts of town.

The characters are ordinary people, according to the author, and the dialogue is natural and honest, but speaks volumes. The lines may be plain, but there are complicated thoughts and feelings that lie between and behind the words.

The scenes are intimate, with two or at most three characters navigating some tough emotional waters.

The play was chosen at the behest of students, who had worked on a few of scenes as exercises in their Acting 2 course in the fall. The themes and characters resonated so well that the whole play was taken up, according to Ashley Wallace, visiting assistant professor of theatre in performance, and the play’s director.

“Due to the unique episodic plot, there really aren’t any lead actors,” Wallace said. “It was truly an experience with ensemble work, with each actor having a substantial amount of material to work with.”

Each player performs multiple characters, so personalities are changes along with costumes.

“It has been amazing to watch the actors develop their different characters and experience the stories separately,” Wallace said.

The range required of the nine actors is the great challenge and benefit of the play from a technical standpoint. 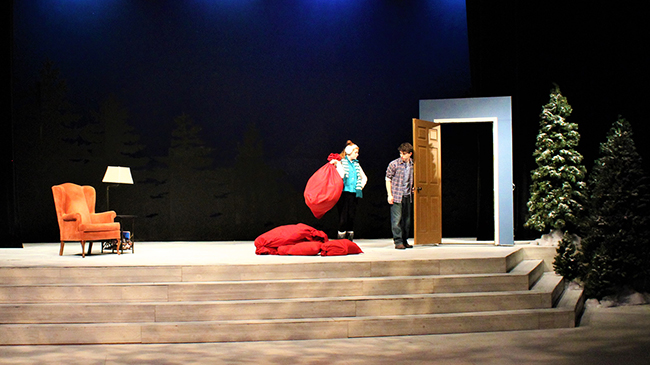 Makenzi Cooley and Matt Street in the scene, Getting It Back. Photo by Rebekkah Meixner-Hanks.

Matt Street, a sophomore theater major from Sellersburg, Ind., has valued the opportunity to work on his comedic timing and appreciates the practice in breaking down a script. He believes the experience of being pushed out of his comfort zone by Wallace has helped to make him a more complete actor.

“It really forced me to break some of my bad acting habits,” Street said. “In this play, you have to be focused and just listen and respond. Anything that isn’t genuine will be immediately noticed by the audience.”

Acting in small ensemble scenes is a tightrope walk that can punish small mistakes, but the stress is relieved by sharing the burden.

“I definitely learned a lot about working with others, the amount of effort it takes to succeed, and who I am as an actor,” Street said. “This production also showed me that for however much I improve, I still have a long way to go. Which is a great thing!” 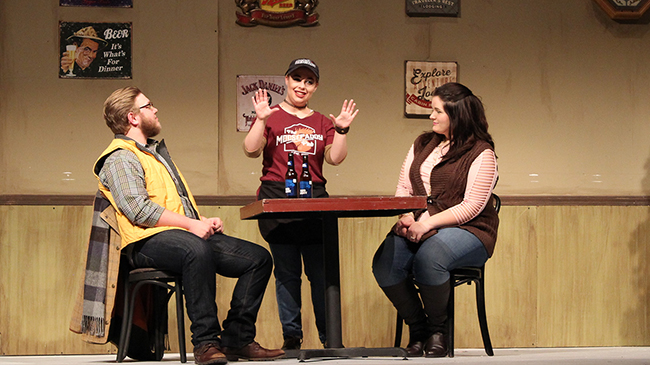 Actor Sarah Inman believes that the play offers something for everyone, from love lost and found to heartbreak, awkwardness and sheer comedy.

“What I enjoy most about this show is the heart behind it,” Inman said. “I find each character to be unique and relatable.”

For Inman, the biggest challenge was “becoming” two different people.

“It was a process, differentiating between my two characters, as they have certain similarities, but with good direction and creative freedom, I was able to emphasize the differences, and ultimately create two totally different characters,” Inman said.

Inman credits the honesty and talent of her fellow actors with helping her achieve “something raw and real” in her depictions.

With finely crafted performances and a universal theme set in a place that is as familiar and as mysterious as love itself, it’s no wonder that the initial performances were both fun and thought-provoking for both the performers and the audience.

“Besides the rich script and beautiful, stripped down sets, one should always support the arts, and be exposed to good art,” Inman said. “That’s what this show is: really good art.”

Remaining performances of “Almost, Maine” are:

All seats for Theatre Department events are General Admission.