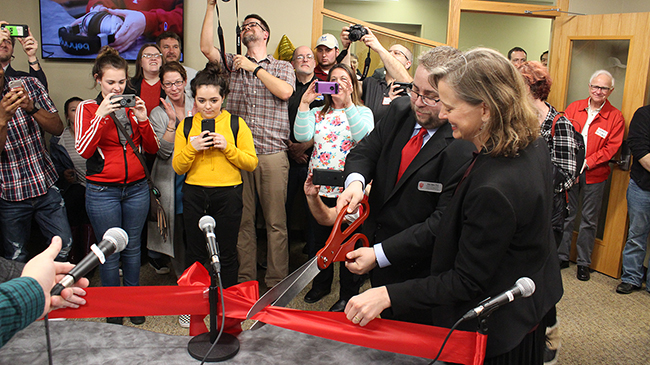 A standing-room-only crowd of faculty, staff, alumni and community friends of IU Southeast filled the suite and spilled out into the hallway.

The launch marked the fulfillment of dreams and the end of a year-long ideation and buildout process that involved creative, mechanical and financial input from across campus.

In her welcoming remarks, Dean of the School of Social Sciences Kelly Ryan recognized Chancellor Dr. Ray Wallace, Vice Chancellors Betty Russo, Amanda Stonecipher and Dana Wavle, and Executive Vice Chancellor Uric Dufrene for their time and resources in moving the project from white board to web reality.

Help also poured in from faculty members such as Tim Haertel, lecturer in music industry and advisor for sound engineering and music business; student station managers Jose Aponte and Jen McNelly; as well as community partners like Tim Dench of Jeffersonville High School, who manages the school’s radio and TV station (WJHI) and oversees construction of similar programs at Charlestown and New Washington High Schools.

For the School of Social Sciences, Horizon Radio has been an all-hands-on-deck moment, inspiring individuals from across the disciplines to contribute in whatever manner they can.

“Today IU Southeast joins the radio revolution and in doing so we are providing our students with critical training for careers in a variety of sectors—from sales and public relations to marketing and broadcasting,” Ryan said.

In his remarks, Adam Maksl, assistant professor of journalism and media, paid homage to the legacy of the journalism program at IU Southeast while marking Horizon Radio as the beginning of a new era in the life of the department, the university and the community.

He drew attention to the expanding journalism program at IU Southeast, noting its growth to three full faculty members in 2015 and the development of both bachelor of arts and bachelor of science degrees in multimedia journalism and public relations, as well as minors in both areas.

The strength of the program is reflected in awards, such as the Pacemaker Award from the Associated Collegiate Press, widely considered the “Pulitzer Prize of college journalism,” in 2015.

“These awards show that not only are we the only university in the region where students can get a degree in journalism and media, but we’re pretty darn good, too,” Maksl said.

Maksl traced a direct line from the appearance in 1947 of the “Southeast Student” the forerunner to the Horizon and the first student newspaper in the entire IU regional system, to Horizon Radio in order to document IU Southeast’s ongoing dedication to pioneering new ways to help journalism students stay at the forefront of their field and prepare them to secure employment upon graduation.

The benefits go beyond career preparation for journalism majors, according to Maksl.

“Not only will journalism and media students get practical experience to help them get jobs, but students from across the campus can use the station as a way to engage further with the campus community, helping to set them up on a path to graduation,” Maksl said. 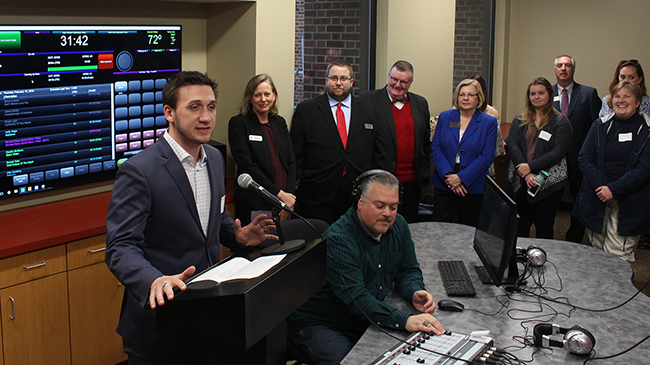 Radio host and IU Southeast alumnus Jesse Rasmussen underlines the importance of radio to the community in remarks at the Horizon launch ceremony.

“There is something special about building something like this,” Rasmussen said. “Students years from now will benefit from all this hard work.”

Rasmussen directed his remarks to the impact that Horizon Radio can have within the broader community.

It’s something he learned in the aftermath of the Henryville, Ind. tornado in 2012.

Rasmussen recalled going live on the air, taking calls from survivors and connecting people with individuals and groups who had information and resources to help.

“From that, we organized a school supply drive we called Crayons for Hope,” Rasmussen said. “We managed to fill three semis with crayons, backpacks, folders, and anything else a school kid might need.”

Some of the relationships forged during that effort have recently enabled assistance to flow to victims of Hurricane Harvey in Houston, Texas, according to Rasmussen.

For now, Horizon Radio, which has actually been live since the beginning of the year, will continue to grow as a unique kind of laboratory that educates students while delivering real-time benefits to the community, both on and off campus.

Students and faculty will continue to attend conferences, glean wisdom from local and national broadcast educators, participate in college broadcasting groups, and work to attract on-air personalities who can fill up the time slots.

“There are 168 hours in a week, and we would hope to get as much of that as possible programmed by students, faculty and staff,” Maksl said.

Some of that programming is already underway, providing an opportunity for people to discover hidden talents. for example, political science faculty members Jean Abshire and Cliff Staten, who had no prior radio experience, now host their own show.

With online audio on the rise, and with over 61 percent of American adults report listening to the podcasts and playlists anchoring themselves ever more securely in our everyday media experience, the timing is perfect for Horizon Radio couldn’t be better.