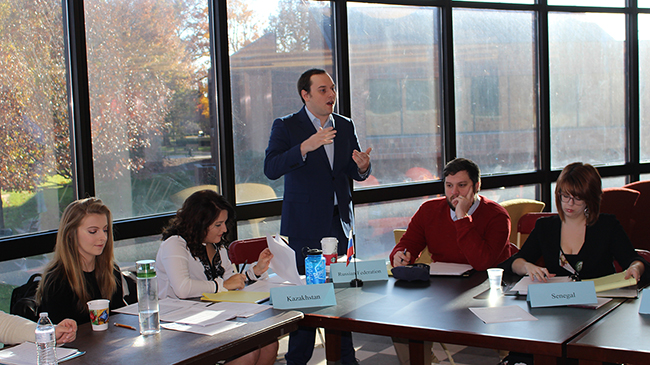 Caleb Williams of IU Southeast makes a point during deliberations at the Model UN.

(NEW ALBANY, Ind.)–Last week, the IU Southeast Library was the scene of high-stakes deliberations as the Model United Nations took on the war in Syria, the deepening stand-off over the North Korean nuclear program, the Israeli demolition of Palestinian houses in the West Bank, the crisis in Yemen, and climate change as an international security issue.

Students representing the United States, Russia, China, and 12 other countries formulated positions, launched resolutions, sought allies, voted to support or condemn, tinkered with language in search of exactitude or ambivalence, and sought to comprehend the essence of consensus that transcends national boundaries.

The three-day event brought together students from IU Southeast, University of Evansville, University of Indianapolis and the University of Louisville, who had been preparing for the event since the beginning of the fall term. At the end, awards were presented for the top four delegates in each of the two Security Councils.

While the Model UN focuses on issues and policy, the value to students goes far beyond current events.

“Role playing and simulations put you directly in a situation where you are forced to make decisions, to think on your feet,” said Dr. Jyotika Saksena, associate professor of international relations at the University of Indianapolis, and a faculty adviser to that school’s Model UN team. “Many times, what you’ve prepared is useful, but not sufficient.”

For Caleb Williams, a senior political science major from IU Southeast, preparation was key. Representing Russia, he felt he needed to get inside the Russian mentality as well as the larger economic and geopolitical interests that motivate Russian policy. He researched actual Security Council proceedings to internalize the thought processes and rhetoric of the real Russian delegations, and even went so far as to email the Russian Embassy for information. (For the record: The embassy did not respond.) That preparation helped him to deal with inevitable surprises.

“This is a wonderful exercise to show how politics works on a stage where communication is a resource you have to maximize to get votes and get people to agree,” Williams said. “Even if you’re not aware of it, you’re learning how to do this kind of thing.”

Trevor Allen, a senior political science major at IU Southeast and member of the Student Government Association, was participating in his fourth Model UN (fifth, if you count high school). He has represented a series of countries, each with a different international persona, requiring him to play different roles. As Australia, he was somewhat reserved; as France, a nuclear power with global influence, he was more central to unfolding events; as Ecuador, he embraced a more limited regional role with authority to speak on specific issues, such as the environment. This year, as Sweden, he played the role of the neutral country that enjoys international respect for its objectivity and an enviable legacy of bringing opposing parties to the negotiating table.

Over the four different appearances, he has gained a respect for the undertaking of diplomacy.

“It’s a much more complicated process than you might think, just looking in,” Allen said. “It requires a lot more coordination and communication between countries, and shows the necessity of nations to work together and negotiate, versus focusing purely on their own interests.”

Allen credits the Model UN with helping him become better able to articulate his own viewpoints, and to get things done.

“It’s helped me figure out better ways to compromise, and has taught me the art of negotiation,” Allen said.

For Saksena, the Model UN has real relevance for a generation of students born into an interconnected world, and requiring the skills to interact with other people and cultures. 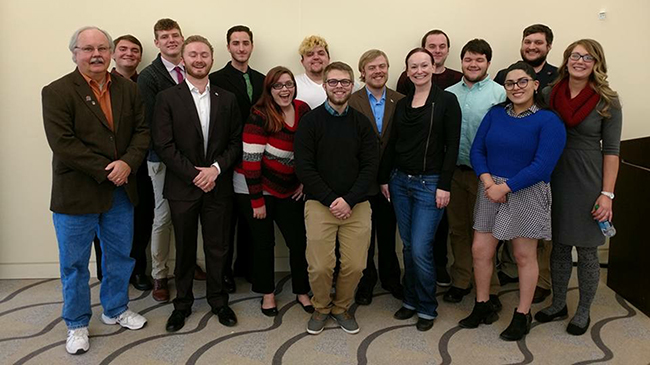 “This is a good way for them to realize the importance of other countries, of their perspectives, their viewpoints, and the need to negotiate,” Saksena said.

Heath Ezell, a senior from Sellersburg majoring in political science at IU Southeast, was participating in his second Model UN, teaming up with Williams as the Russian delegation. He noted that this year’s crises seem by and large far removed from those that inflamed the event last year, held during the U.S. elections. That distance combined with his appreciation for diplomacy has given him a certain optimism about the future.

“I think the world will be okay,” Ezell said.

Homepage photo of the assembled delegates to the Model United Nations and their faculty advisers by Kenda Eley.