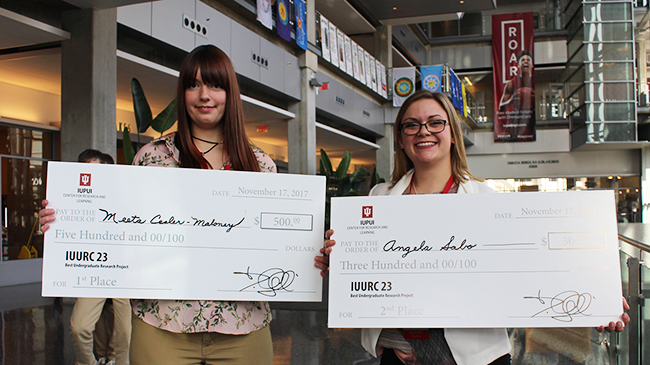 Cesler-Maloney won first-place honors for Best Undergraduate Research Project for her work, “Quantifying the relationship between ozone and meteorology during the Arctic spring.”

The women’s 1-2 capped a strong overall showing by Grenadier undergraduates, who made up nearly half of all entrants with 72 students and 52 presentations.

The IUURC, established in 1994, is dedicated to promoting undergraduate research, scholarship and creative activity in all fields of study performed in partnership with faculty or other mentors as a vital component of an Indiana University undergraduate education. The annual conference gives undergraduates from across the IU system an opportunity to present their research via oral and poster presentations. 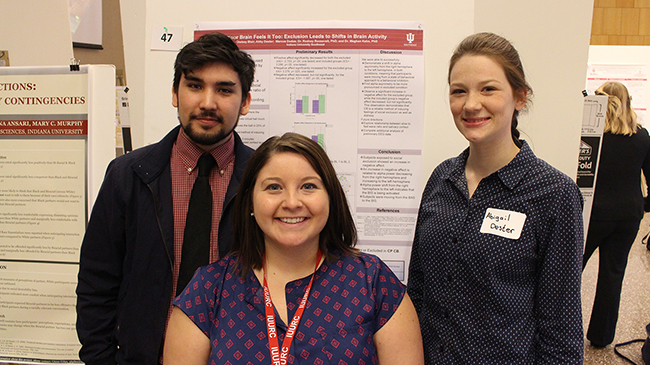 Cesler-Maloney and Sabo were two of five finalists in the competition, which involved a five-minute oral presentation before judges and a short essay, in addition to the standard 10-minute public presentation.

For the competition, Cesler-Maloney worked with research advisor Dr. John Halfacre, assistant professor of chemistry, to present the pith of her research, and name its overarching importance while resisting the temptation to go into specifics.

“The ability to communicate science to a wide range of audiences is a critical skill that is often under-emphasized in many undergraduate and graduate science programs,” Halfacre said. “As public skepticism of science increases, it is more important than ever that we scientists learn and teach how to more effectively explain exactly what it is we’re doing, why, and how it affects them.

Cesler-Maloney, a senior from Louisville majoring in geology and chemistry, examined the impact of ozone depletion on the lifetime of pollution in the Arctic atmosphere.

“The air we breathe is very important and we really need to know what’s in it,” Cesler-Maloney said. “In the case of ozone, a lot of people only know the negative effects of ozone, but actually at normal concentrations, ozone is really important in the atmosphere, because it helps clean pollutants. It’s really important for us to understand all the factors that influence this ozone chemistry so that we can better monitor global pollution.”

Cesler-Maloney intends to pursue a graduate degree in chemistry, and seek out a post-doctoral position at a university or research institute where her skills may contribute to advances in atmospheric chemistry.

Embedded in her research, she had little time for pre-competition jitters.

“The fact that I was even part of a competition never really clicked in my head until I received an email with ‘you’re a finalist’ in the subject line,” Sabo said. “Even then it didn’t really feel real until the morning of IUURC—the closer we got [to Indianapolis] the faster my heart started beating as I realized there was really no turning back.”

In the end she was well prepared, having refined her slides several times and given several rehearsal talks to tailor her presentation to each audience, according to her faculty mentor, Pam Connerly, associate professor of biology.

Sabo is convinced that her research has broad applications, a factor that translated well during the competition. Phages are the most abundant of biological organisms, and are becoming useful in many fields, including medicine, where their bacteria-killing properties hold some potential benefit in an age of mounting resistance to antibiotics.

“I think my research into phages is relevant to society because it is helping broaden the knowledge on phages, how they operate, and how they can be helpful in numerous ways,” Sabo said. “That motivates me because by doing something that I find fascinating and something that I honestly love, I’m not only helping other phage biologists, but I’m indirectly helping people by expanding knowledge that can be applied to phage therapy.”

Sabo has applied to several graduate schools, in programs ranging from microbiology and molecular genetics to cellular and molecular biology.

Her determination, like that of all the student researchers, is a source of inspiration for her instructors, according to Connerly.

“Discovery-based research gives students important learning opportunities and makes me a better teacher,” Connerly said. “It is a joy as a faculty mentor to see students’ excitement as they engage in direct research experiences, and then to see them grow in confidence in their skills as they develop their independence as researchers.”

The actual prize presentation was packed with drama, as the field was narrowed from five finalists to three, then two, then one.

“Meeta and Angela both did a great job,” Halfacre said. “And the fact that our campus was able not only to produce two of the top five finalists IU-wide, but in fact the two top finalists speaks to the quality scientific projects and training IU Southeast provides to undergraduates.”