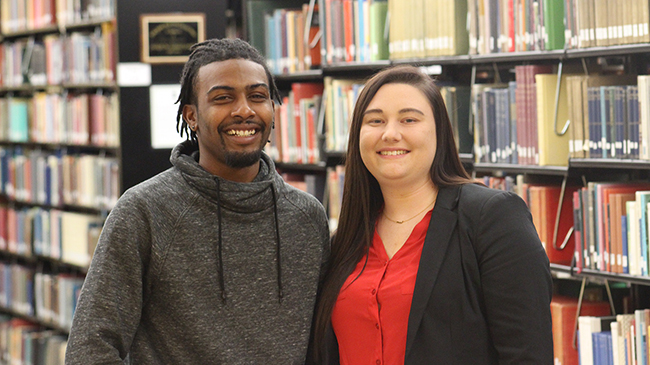 Joining them was Dr. Jennifer Ortiz, assistant professor of criminology and criminal justice.

Founded in 1941, the ASC is an international organization whose members pursue scholarly, scientific, and professional knowledge concerning the measurement, etiology, consequences, prevention, control, and treatment of crime and delinquency.

The conference is the largest and most prestigious gathering in the field of criminology, according to Ortiz, bringing together academics and practitioners to share groundbreaking scholarship.

Ford, a senior from Louisville, Ky., presented on the observed differences in the narratives of black and white offenders re-entering society.

The study arose out of Ford’s interest in the thought-world of incarcerated individuals, their views of the mistakes that led them to prison and their experiences afterwards.

He found that, contrary to widespread cliches, the black men he interviewed were more likely to own their culpability and commit to changing their outlook and behavior, and less likely to blame “the system” for their fates than were their white counterparts.

Ford overcame unusual challenges in conducting his research. Some of these recently released individuals were unstable or simply hard to keep up with. Those he did manage to engage were not entirely willing to trust him. He worked hard to overcome their suspicions about his affiliation and intentions.

“I remember talking to a participant on the phone for nearly three hours about nothing, just to gain his trust to interview him,” Ford said.

He sees the relevance in his work as using research to build understanding and empathy in the criminal justice system.

“I’m all about helping people and that is why I have fallen in love with research,” Ford said. “I want to find the problems and create a solution.”

Jackey, a senior from Louisville, Ky., presented research on the impact of police department size on procedures for gender-related misconduct within the force.

As a woman intending to work in law enforcement, Jackey wanted to learn more about the realities of entering a male-dominated field.

In the first phase of her work, she interviewed female law enforcement officers to determine whether and how their gender had affected their experience. In the second phase, she looked specifically at the size of their departments to determine if that had an impact on procedures for misconduct.

She found that larger departments are more likely to have policies and procedures in place to deal with sexual harrassment and discrimination.

Jackey’s research was full of challenges and surprises. Among the former, the difficulty of getting interviews, and the hesitancy of individuals to speak of their own experiences. Among the latter, the ways in which mechanisms for accountability contribute to morale.

“The biggest surprise was how confident the women in larger department felt that if an incident happened to them or someone else, the department would know how to handle the situation,” Jackey said. “In smaller departments, there may only be one woman.”

Jackey sees the relevance of her work in helping to change the mentality of women who are under pressure to toughen themselves up in a male-dominated field, and so do not recognize or admit that they are being victimized. As a result, policies to assist these women and hold others accountable are sometimes lacking.

“It is important for individuals to know that the larger departments have come up with ways to protect their officers and make them know that harassment and discrimination is not tolerated,” Jackey said.

“As I am always saying, we need to move beyond the classroom,” Ortiz said. “This experience allowed the students to experience research and its importance to the world.”

That importance was reinforced by the presence of representatives from the “real world” of criminal justice practice as well as academia.

According to Ortiz, both Jackey and Ford networked with professionals from a variety of organizations, such as RTI International and the Urban Institute of Justice, two prominent think tanks. These individuals provided the students with guidance on their career paths and encouraged them to apply for internships once they entered graduate school.

And speaking of graduate school, the students also spoke with the dean of Rutgers University who encouraged them both to apply to graduate school there.

“These presentations speak to the future of our program,” Ortiz said. “This program is shifting towards a social justice framework that emphasizes graduate school. Providing these opportunities to research and network makes the transition to graduate school easier.”