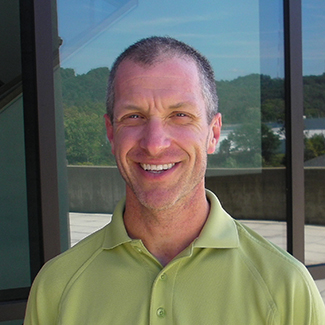 (NEW ALBANY, Ind.)—It’s another day in W-430, Organizations and Organizational Change, and Ken Harris, professor of management, is having a blast as a sort of offensive coordinator.

Twenty-odd students are divided into groups of four. Each group is pensively centered on a tennis ball. From their laser-like focus, you’d think it was a blinking nuclear device. Harris counts down, and at the “go” sign, the students begin tossing the ball in a pattern they have devised to satisfy Harris’ instructions.

After three minutes, Harris calls time, and tallies successful transfers on the white board.

Then he changes the parameters. Another ball is introduced. The students discuss how to make it happen, and adjust their technique. They mostly move in, closer together, in order to shorten time required, minimize errors.

But it’s definitely harder, and things start to go haywire for some teams, much to Harris’ delight.

Three minutes later, new figures are tallied on the board. Some advance, some fall back.

Another ball is added. Different individuals are put in charge. Mayhem ensues. And yields to intense concentration and a competitive hush.

At the end of several rounds of see-sawing mastery and incompetence, there’s a debrief:

Was the exercise useful?

Now the assignment: the groups will design and execute an activity of their own, and present it to the class–in three weeks’ time.

The clock is always ticking in a Ken Harris class.

Partly it’s an effort to cultivate a respect for punctuality.

Harris is a restless guy, bordering on jumpy. His mind zips around at warp speed, and he admits to having a short attention span. He competes in marathons and triathlons, and it’s easy to imagine that even after wrapping up one of those grueling events, he could deliver a lecture. Or two.

Except he doesn’t really do lectures.

At least not in the traditional sense, in which the instructor delivers an oration to the class, and then assigns a series of activities to reinforce what was just said.

Harris’ classroom is the opposite: a bustling hive of induction that puts the experiment before the interpretation.

“We are very activity- and experience-oriented with a focus on getting our hands dirty,” Harris said.

Or they role-play in small groups, or even one-on-one in front of their peers, with one in the role of the boss and the other the employee, with a simple prompt about the basic topic of the conversation. Sometimes Harris will call a time-out and the students will switch roles, or he will call in a different student to assume one of the parts.

“I can tease this out in a lot of different ways,” Harris said. “I can put all females in one group, or all extroverts, or all assertive or more passive people, or I can say that the quietest person is the group leader, or hand out secret instructions to the leader to be disgruntled, or agreeable, or indecisive.”

As the game plays out, students learn to cope with a situation as it presents itself. They learn to collaborate with challenging team-mates, communicate with insecure colleagues, step up or back, yield or stand their ground, give feedback constructively and accept it graciously.

“And then they start to think about the implications of the activity,” Harris said.

That thinking comes into focus during the debrief that follows immediately upon each activity, and gives students a chance to share their gut-level first impressions about what worked, what didn’t and why.

Out of this comes an understanding of the relationship of the individual to the group that shapes the performance of an organization.

Once upon a time in the business world, innovation was an option, albeit one frequently frowned upon if nothing was broke.

We’re all familiar with the outward trappings of change—the way that, seemingly overnight, iPhones, AI, pumpkin spice lattes became things we can’t function without, and on which our economy has come to depend.

But some shifts, no less significant, are more subtle.

Generational changes in the mental space are transforming how entire organizations function.

“In the past, the boss told you to do X, you did X, the boss said, ‘good job,’” Harris said. “Now the reward is being empowered, feeling like I’ve got a voice or that I care about the company.”

That shift has put a premium on the ability of managers to retain talent by including them in conversations about the “big picture” of a company’s vision and planning.

Gone are the days of graduation-to-grave loyalty to the firm. Today’s manager needs to address the inner needs of free agent workers, or risk losing them.

Employees at all levels don’t just want to work, they want to belong. And for that to happen, they need to be included in a culture of communication that gives them insight into the bigger picture, so that they can see how their contribution matters.

That question lies at the heart of everything Harris does as an instructor.

So is the answer: innovation

Harris believes in the truism: people join organizations but they leave bosses.

Anything a person can do to strengthen the organization and become a better boss will be critical to a successful career.

“At a certain level I think that managers and leaders have to be innovators,” Harris said. “They have to adapt to the new generation.”

Through classroom innovations, Harris is essentially teaching the students not how to stack cups and write with a marker attached by rubber bands to five other people’s hands, but how to become innovators themselves.

That is clear during the class assignment, which the students have to design and lead as a team. It may be a decision-making exercise, an icebreaker, a facilitation, a team-building activity, or some other similar proposition.

“This pushes students out of their comfort zone,” Harris said. “It’s a skill they don’t get in most, if any, classes.”

Like many of his colleagues, Harris takes pains to align his classroom experience with the “real world” that students will find beyond the university.

But in his course, the concept has a different inflection.

For Harris, management is everywhere, and leadership is a state of mind, and part of his job is helping his students recognize that.

He starts each class punctually—another touch of real life—with a quick discussion of news items plucked somewhat at random from nonpolitical websites.

The stories have one thing in common: they are not “about” management or leadership per se.

“Teaching management and leadership, I think everything relates,” Harris said.

And so a story about Krispy Kreme donuts naming one of its creations “The Eclipse” for the recent celestial event becomes fodder for a discussion about the wisdom of marketing decisions. A story about a rookie quarterback getting playing time becomes a jumping-off point for a conversation about age differences in an organization.

Harris’ focus on the world beyond the campus doesn’t mean that academic enterprise has no value. Quite the opposite.

In debates about the relative merits of “book learning,” Harris takes the view that school is every bit as practical as any other endeavor.

“In college you show persistence, an ability to communicate, to adapt, to demonstrate mutual respect, to deal with 40 different sets of managers with different teaching styles,” Harris said. “You’re basically learning how to be a good employee.”

Where does innovation stop?

Harris recognizes that it’s not something he can teach and not adopt himself. As a leader modeling effective management skills, he is obliged to practice what he preaches.

This extends into the administrative realm, with a willingness to communicate with students on their terms, maybe via text message instead of during fixed office hours, cognizant of their lives outside of the classroom (90 percent of them work, Harris said).

That willingness to exert himself for the greater gain not only sets a tone to be imitated, it infuses his teaching.

“As a professor, nothing is easier than if I control every minute of class,” Harris said. “Every time I let students talk, that just became a little harder on me, because I never know what’s coming out of their mouths.” 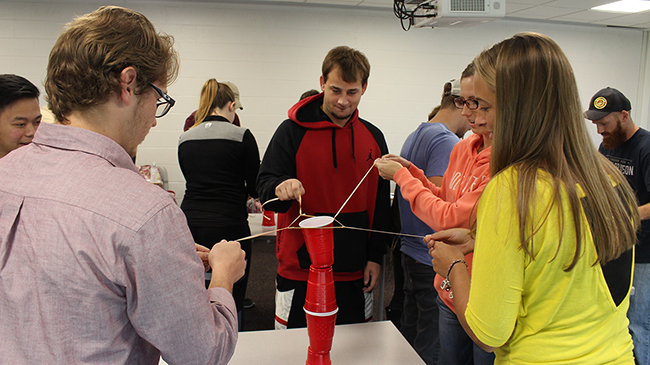 That unpredictability, and the ability to run with it, goes a long way toward keeping Harris fired-up about his job.

He reflects that he has been at this teaching thing for quite a while now, and even at IU Southeast he has been leading the same classes for over a decade. Some might look at this as stasis, but Harris sees it much like the Greek philosopher Heraclitus, for whom the river was the same but the water was always changing.

For example, at some point in the semester, Harris’ students begin to pre-empt Harris’ web captures with stories they have tracked down themselves.

It’s a moment to sit back, let things take their course.

“When I let students bring in articles, I get to see things from a different perspective,” Harris said. “Sometimes our conversations can bring out things that I can’t bring out, and I’ve had some innovations that have come from them.”

A better place in life

For Harris, teaching is achieving a balancing act, creating a space for learning. It’s something intangible, elastic. There is enough structure so that students feel respected enough, and enjoy a degree of freedom, including a freedom to fail. Tennis balls are dropped, cups topple, and that can be a good thing.

That care for the bigger picture of a student’s welfare, not just classroom performance, is a theme that courses through Harris’ career and is reflected in the classroom. A winner of the IU Southeast Senior Faculty Distinguished Research and Creativity Award in 2015, he has served on countless committees contributing to improvement in all aspects of campus life. He has published voluminously in his field, and many articles have found further audiences in mainstream media such as Forbes and online. He has himself worked outside academia, finding success as a consultant for Deloitte & Touche in Chicago, Memphis and Saudi Arabia.

But somehow Harris always knew he was destined to teach, and traces this back to his mother, a professor of nursing whose very basic career motivation resonated with him: “I get to help students get to a better place in life.”

That may involve managing expectations. If students and employees expect to be included in the big picture, sometimes they also expect to become a vice president by the time they are 26, and so teaching must balance encouragement and realism.

When the projects are presented, Harris is no longer the offensive coordinator. He’s in the back of the room, a bystander, like some guy waiting for a bus.

The students are running the show, transformed from undergrads in sweats to organizational team-building experts in corporate casual.

On this day, a group has organized an exercise that challenges the other teams to build a tower of plastic cups without touching the cups, using only rubber bands.

The second project is a scavenger hunt, with groups assigned the identities of houses from Harry Potter novels. They fan out across campus and locate items on the list, take selfies with the items, and post them to Instagram.

There is invention, wit, commitment, inspiration on the fly.

And of course, the inevitable debrief.