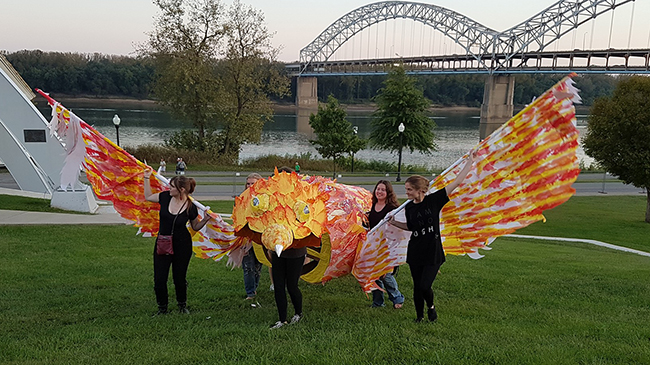 The mobile structure bested competing pop-up installations from Bellarmine University and Kentucky College of Art + Design in a playful battle of creative ingenuity.

Voting was by public acclamation via social media: the winner was the project with the most images posted on Instagram.

The Carnegie Center challenged the three teams to construct a piece of interactive art  employing multiple media made specifically for the spaces they inhabit, to be viewed and experienced for one night only.

The IU Southeast team consisted of students from 3D art, drawing and printmaking areas, who first tackled the concept of interactive public art.

“Rather than being a sculpture that stands there, interactive art contributes to the living environment,” said Rachael Bailey, a senior from New Albany, Ind. studying drawing and painting.

The IU Southeast team carved out three class periods, or nine hours, for this project. With the pressure definitely “on,” brainstorming began.

Jonathan Smith, a student from De Kalb, Ind. with a passion for creature design, had recently been inspired by the giant Phoenix sculptures by contemporary Chinese artist Xu Bing, assembled from scraps and debris from construction sites in and around Beijing.

The idea caught on.

Having settled on what they were building, the students began to brainstorm how they would build it.

Joseph Combs, a transfer student from Corydon, Ind., began sketching while listening to the discussions. He conceived of the bird as a fuselage, like an airplane.

“The only thing that made sense was something with sturdy ribs and a skin,” Combs said.

The plan gained assent, and students broke up into groups to design and build the head, body and tail sections along the lines Combs had sketched out, with a cardboard skeleton sheathed in overlapping layers of cardboard, poster stock and paper.

“The challenge was coordinating the teams,” Combs said. “You want people to do their own thing, but you need it to stay cohesive, so the different parts would fit together.”

Drawing came into play in the ideation of the different parts, the creation of shapes for feathers and other details and “generally transforming cardboard into something colorful and fiery-looking,” according to Sheehan.

Printmaking skills were applied in the next phase, as the phoenix acquired its external appearance, which had to be suggestive rather than strictly representational in order to produce the desired effect during the performance.

“We printed from nontraditional relief surfaces like wood, foam, textured vinyl and screens, so they were really fluid, abstract compositions,” Crum said. “Students cut them up for use as feathers, so they had repeating patterns that were based in printed patterns but became dimensional areas.”

Three-dimensional design and construction processes figured throughout the project. And as a piece of interactive public art, the work had to involve the viewers somehow. Students came up with numerous opportunities for audience participation. 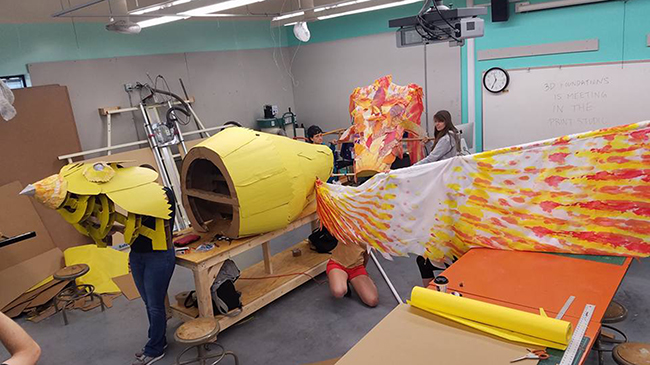 The Phoenix brought together students from different studio arts.

First, a team of several students and their instructors “wore” the bird, dancing to the live music from the nearby stage and generally soaring among visitors. Secondly, the bird was outfitted with feather tags that encouraged people to write down and pin their hopes and dreams to this symbol of rebirth.

“The people were actually contributing to the artwork,” Bailey said. “They were part of the experience.”

Finally, the birds’ colorful appearance, high degree of public interaction and groovy dance performance made it a natural for social media, where it was rewarded with the most photo and video posts.

Ultimately the gain for the students was more subtle and more lasting than building the bird and seeing it triumphant.

It was to be found in the range of skills practiced in an assignment was almost too much fun.

Throughout the hectic process, students in the different areas of studio arts were challenged to work outside their comfort zones, grapple with unfamiliar tasks, problem-solve, communicate, blend their creative individualities into a larger team concept and perform in public.

Anyone who missed seeing the bird take flight should not be disappointed. True to its nature, the IU Southeast phoenix will rise again: it will be on display at the Carnegie Center until Nov. 22.