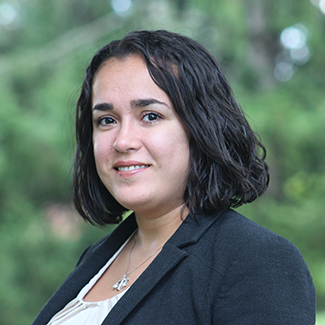 (NEW ALBANY, Ind.)—Every jail is unique, and yet all are somehow the same.

Some are downtown, surrounded by normal life. Others sit apart, in rural isolation. At one, you enter through two wire fences that can be made to enwrap you if necessary. At another, one steel door closes behind you with a distinctive click-lock before the next door opens ahead, briefly confining you in a small breathless inter-space. One rec yard is large, empty and silent, while another sits atop a seven-story building, surrounded by 20 feet of razor wire. In some there is art on the walls, made by prisoners. In others the interiors are stripped to a clinical beige.

But it’s the commonalities that stay with you. Forfeiting the contents of pockets and purses. Enduring the pat-down. Adjusting to the artificial light. Breathing the stale air. Feeling the coldness of buildings that goes beyond the temperature. The sterility, despite the dinginess. The sounds of people–either crushingly loud or eerily hushed. Marking the somnolence, as if time has ceased to exist.

Students tour these facilities with their instructor, Jennifer Ortiz, assistant professor of criminology and criminal justice. Around them the inmates mill and crowd and hurry, moving to rhythms and for reasons the students can’t understand, adding to the unsettling strangeness. They’ve watched years of crime shows on TV, but this is different.

This is real life.

Since joining the IU Southeast faculty in 2015 it’s fair to say that Jennifer Ortiz has taken the campus and community by storm.

Prior, she served as the research director for the New York State Permanent Commission on Sentencing and as a research associate at the Center for Criminal Justice Research and Evaluation Center at John Jay College of Criminal Justice.

At IU Southeast she joined a dynamic, multidisciplinary team in Criminal Justice and Criminology, and added her own unique brand of Brooklyn energy and hustle to a unit with big plans and a habit of innovation. 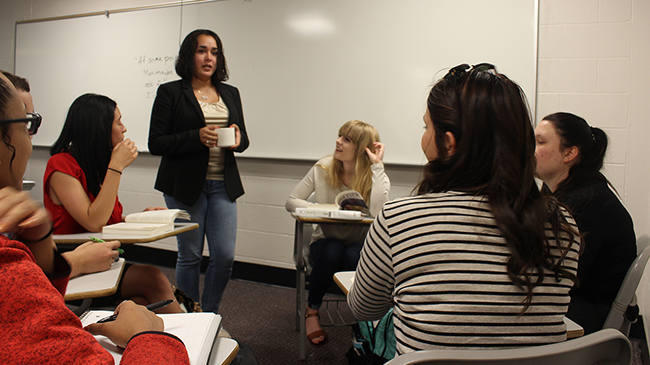 Rigorous and relaxed: Jennifer Ortiz contributes to a group discussion on wrongful convictions.

She has expanded the university’s community outreach—and heightened its visibility—through her role in “60 Days Inside,” a TV reality show about conditions at the Clark County Jail, and through public involvements such as marching in the first Jeffersonville Pride Day to show support for the LGBTQ community.

She is a person who, by nature, gets to the point, initiates and follows through. There is a quiet but sustained urgency to her thinking and speaking and doing. If she seems hurried, it is a hurry to open eyes and minds, to help the world see and enact a better version of itself.

Breaking down the walls

Ortiz has a name for her vision of innovation: Breaking down the walls of the classroom.

“Breaking down the walls means so many things,” Ortiz said. “It’s basically taking the material beyond the textbook.”

The first wall to fall is that between textbook and material.

Criminal justice, as usually presented, can be “dry and boring,” according to Ortiz.

The material itself is the opposite: it’s the stuff of life–messy, chaotic, passionate, confusing, violent—and it constantly confronts criminal justice with ethical dilemmas that are resolved, for better or worse, by recourse to established practices and procedures emanating from legal precedent. It’s about the institution and its structures, known colloquially as “cops, courts, corrections.”

As an academic program, criminal justice is the rigorous—and absolutely necessary—immersion of students in the system as it currently exists, to prepare them to succeed within it as law enforcement or corrections officers.

In Ortiz’ view, there is no way that “textbook” criminal justice can satisfactorily encompass the world it is designed to address. That world is too complex.

She draws a distinction between criminal justice and criminology.

Criminology inhabits the same realities, but with a focus on critiquing the criminal justice system and trying to understand crime itself by bringing in the perspectives of other disciplines such as sociology and psychology.

While differentiating the two disciplines, Ortiz takes down the wall that separates them. She seeks to infuse criminal justice with the social justice aspiration of criminology, but also to make the understanding gained in criminology practically useful within the existing confines of criminal justice.

The trick is to somehow bring this to life, inhabit it in such a way that you incarnate the link between the classroom and the world.

In this, Ortiz has had powerful role models.

“I always liked professors who made the material real, who made it matter in terms of real life,” Ortiz said. “Definitions are boring, but seeing how those definitions operate in the context of the real world made those things fun.”

At the top of the list was an undergraduate sociology professor who changed her life and view of what education could be through his energy and willingness to connect with students, and his drive to link the material to real social outcomes that many of them were facing in their lives outside of class. He would become and remain her academic and professional mentor.

“Professors like that made you feel like getting a college education was so you could do something, so that you could change something,” Ortiz said. “The goal wasn’t getting a good grade on the Final, the goal was what you were going to do post-graduation.”

As an instructor, first at John Jay College of Criminal Justice and now at IU Southeast, Ortiz has worked tirelessly to break down the wall between the classroom and real life.

She makes the complex phenomenon of imprisonment real by bringing incarcerated individuals to class to speak of their experience. She takes students on extended field trips to facilities of all types—from the Clark County Jail in nearby Clarksville, Ind. to the Metropolitan Corrections Center, a federal prison, in Chicago, Ill.—to give them a direct exposure to the conditions that incarcerated individuals face.

“For many of the students, this is the first person they’ve ever seen who has gone to prison, and it’s not what they expect,” Ortiz said. “But they can see it, and they can talk to that person, and that person can tell them honestly everything that has happened to them and what they’re going through.” 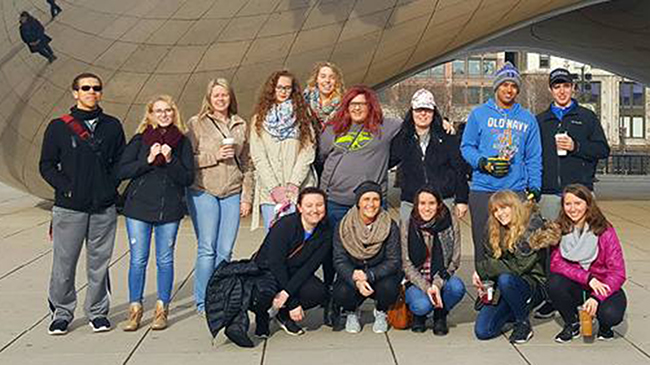 She has also required students to correspond with wrongfully convicted individuals with whose story they have become acquainted.

In one instance, the recipient of the letters was a death-row inmate who was executed just three days after receiving the student letters. Subsequent evidence cast doubt on his guilt.

The students were upset, and out of this came a conversation that went far more to the heart of wrongful convictions than a whole semester of readings would have.

And that element of heart is the ultimate payoff. The goal is to humanize incarcerated persons.

“One of the biggest issues we have is societal perceptions of people who commit crimes,” Ortiz said. “They’re considered evil, monsters, not human beings.”

Establishing some kind of personal connection scours away a ton of accreted preconceptions, fears and inherited biases, and gets to the foundational bedrock of understanding, from which the entire past, present and future of the criminal justice system can be analyzed, assessed and improved.

Students come to see these people in the full context of who they are, where they have come from, and why they might have done what they did. Inevitably, compassion replaces the presumption of otherness as students come to see the world through the position of people caught in the criminal justice system.

The final wall to tumble is perhaps the most important. It’s the wall between the students and her own life. Bringing it down is risky, but it’s the essential piece of reality that makes class time worthwhile.

“I grew up poor,” Ortiz said. “Like, five-kids-sharing-a-can-of-diluted-Chef-Boyardee poor. In a high-crime, drug-infested, gang-dominated neighborhood.”

Many of the men in her family, including uncles and cousins, were incarcerated at one time or another, their mistakes placing them at the mercy of sentencing guidelines that put punishment ahead of help, and made recurrent missteps inevitable.

After one of her family members was sentenced to seven years in a maximum security prison, alongside murderers and rapists, for his first drug-related offense, an outcome hastened through a shoddy defense by an overworked and indifferent public defender, Ortiz vowed to fight on his behalf and on behalf of others in his position.

She aspired to achieve this through becoming a lawyer, only to be disillusioned by the pace of change she witnessed during a college fellowship at a law school. Her Plan B was public policy – she would become a data analyst to drive changes at the system level. She raced to a combined BA/;MA at the John Jay College of Criminal Justice, and entered the Ph.D. program at the City University of New York (CUNY). It happened that, to keep her stipend, she was required to teach.

“I fell in love with teaching, with the dynamic of the classroom,” Ortiz said.

A confessed “Constitutional nerd” who spends her spare time listening to Supreme Court testimony, Ortiz brings to the classroom not only a profound knowledge of and love for the law, but also a passion for social justice and a strong conviction that the law must respond positively to the aspirations of historically marginalized citizens.

“I believe you have to have laws, and that the laws have to make sense,” Ortiz said. “Institutions should always be evolving.”

Evolving to help make the Constitution a reality for more people.

“Students like to hear the real stories, the truth and how it applies in the world,” Ortiz said.

In this field, credibility is everything. What she has to say is provocative, and it is impossible to dismiss as “mere theory” since it has been lived as well as studied.

She is young, which is a double-edged sword. She connects with students when she says that theory is dry and boring. But she has to work extra hard to convince them that what she has to say is valid, that she is an authority with positions that are based on expertise and evidence.

All strands come together in her critical approach to criminal justice as a flawed set of institutions, and in the struggle to help these institutions overcome the legacy of racism and social injustice that has shaped them since their inception.

Ortiz bares the history of American policing, from its origins in slave patrols and post-Civil War convict leasing to the first hard-won steps to integrate police forces in the 1950s and on to contemporary conversations about racial bias, mixing hard data with rich personal experience to demonstrate the scope of the challenge each criminologist will face in some way.

This semester’s course focuses on wrongful conviction, a phenomenon that historically skews African American and Hispanic. The students read case studies, identify the issues, seek to understand the people and their motivations. They will visit a real facility, and grapple with real cases, real people.

Institutional racism will no longer be an abstraction, a statistic or a buzzword. It will have a face, and a story.

In the Wabash Valley Correctional Facility in Carlisle, Ind., another wall has come down. Ortiz’ students are in conversation, not with one another, but with inmates, in small groups and one-on-one. They’re asking questions, hearing what it’s like to be on the inside, as well as on the outside.

They are informed not only by what they see and hear, but by all that has gone into preparing them for this moment, the classroom work that has helped them understand these people not as others, but as complex human beings in a social context.

This is real life.