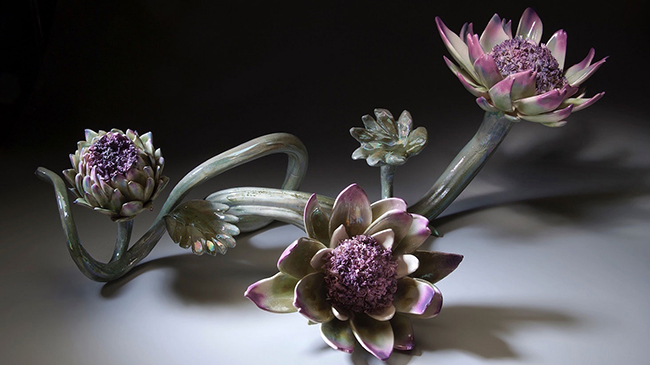 (NEW ALBANY, Ind.)—The concept: 24 artists from 16 countries will “gather” via live-stream video over a 12-hour span on Tuesday, Oct. 10, to answer questions from fans, fellow artists and friends of ceramics.

The event is called “Artaxis Conversations,” and it’s the brainchild of Artaxis, the arts organization founded by Brian Harper, associate professor of fine art at IU Southeast. It will be streamed live on the Artaxis Facebook page and archived on the organization’s website, Artaxis.org.

“Artaxis Conversations” marks a milestone in the arc of the website, which started in 2005 as a humble directory for ten artists to display their work and make connections. Thanks to over a decade of tireless dedication, the website has blown up into one of the world’s premier forums for juried ceramic art and the now global community of artists that produce it.

This “evolving independent network of artists” now numbers more than 500 artist-members from 35 countries and is registered as a 501c3 nonprofit art organization (Artaxis Organization, Inc.) based in New Albany.

It has a blossoming array of initiatives, partnerships and projects. Yet it remains true to its basic concept as a promotional resource by and for contemporary ceramic artists, each of whom has a page with a bio or CV, artist statement, a selection of images, and contact information.

Harper has been the driving force behind Artaxis from the outset. But a lot of his influence is felt behind the aesthetics, in the realm of blood, sweat, tears, money and self-taught coding.

One of the things that distinguishes the site, and that attracts so many artists and visitors, is the quality of its visuals. And that means bandwidth. Memberships, fundraising and a fair amount of money—Harper’s as well as that of other artist donors—have been needed to purchase enough bandwidth to feature the site’s gorgeous images, which number into the thousands on hundreds of pages.

Other technology-related costs involve the plugin licenses for the application and upload forms, and other functionality aspects, as well as more basic requirements such as web hosting, encryption and domain name registration. Artaxis also avails itself of a content delivery network that mirrors the site on servers all around the world.

“When an international visitor comes to the website, they get routed to a city closer to them—such as São Paulo, London, Tel Aviv, Singapore, Berlin—which gives a faster web browsing experience,” Harper said.

Harper is currently teaming with a web designer to improve the search functionality of the site, so that artists will be able to more easily locate one another by region.

“The technical challenges are constantly changing because the web is not a static place,” Harper said. “Web standards change, monitors and browsers change and the way people interact with the internet changes. Knowing the website is being used by thousands of people every day is a pretty good motivation to get things done!”

It’s aspects like this that remind one that while ceramics is as about as earthy as one can get, Artaxis is extremely tech-forward. 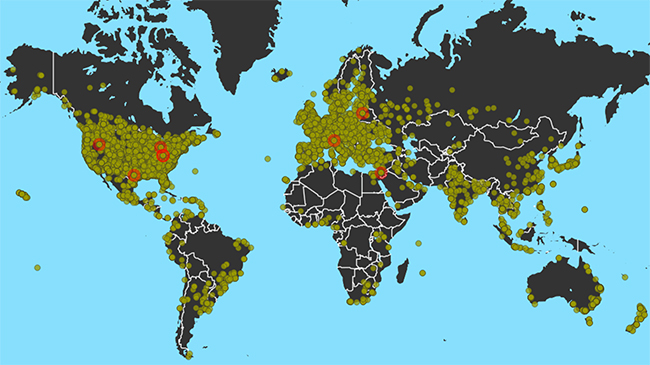 A screen shot from Artaxis.org, showing visitors to the site in real time. At the time of this capture, on Oct. 4, the site had registered nearly half a million views in the past year. Photo courtesy of Artaxis.org.

That technical prowess enables Artaxis to be extremely agile and maintain a more cohesive community, no small feat when your events and conversations span the globe.

“When I’m working on projects that I know are reaching thousands of people and engaging them in looking at, and talking about artwork, that’s what gets me excited,” Harper said.

Artaxis functions as an ongoing gallery exhibition. New memberships are decided by juries of seven artists chosen at random from among the existing members.

That process is a big draw for artists like Dandee Pattee, a revered studio potter from Casper, Wy. who is now secretary of the board of directors.

“I joined Artaxis because the site is peer reviewed,” Pattee said. “The jury process gives more meaning to membership.”

That process allows for a constant influx of new and unique work that meets a very high bar for quality of concept and execution.

“The members in Artaxis tend to be progressives who are challenging the most mundane conventions of the field,” said Samuel Johnson, professor of art at the College of St. Benedict and St. John’s University in St. Joseph, Minn., and treasurer of Artaxis.

According to Johnson, those conventions include an expectation that bowls express “generosity,” for example, that porcelain be graceful, that high-temperature ceramics are superior to low-temperature ceramics—tempests in ceramic teapots for some, but that ultimately tempests that wind up governing widespread attitudes and popular predilections.

“They are surprisingly stubborn impediments to progress because they operate at almost the subconscious level,” Johnson said. “Once outside of these conventions, one can see new possibilities for meaningful artistic achievement.”

That view has propelled the Artaxis community well beyond its initial concept.

“Its origin as an online directory of progressive ceramic artists is still in its DNA, but the organization has evolved beyond the webpage,” Johnson said. “Artaxis is now actively engaged in making contributions to the field,” Johnson said.

Many of those contributions revolve around education. While promotion of artists is paramount, and the membership is heavily professional, the site is heavily used by instructors as a resource to expose students to cutting-edge, peer-reviewed ceramic art in a user-friendly and informative format. Currently the site includes over 700 artist statements and vitae, with opportunities for student/artist interviews, discussions and networking.

Professional partnerships with other organizations, such as the journal Studio Potter, directly benefit IU Southeast students, enabling Harper to bring leading voices in the field to speak on campus, and otherwise connect with the ceramics program.

“As the executive director of such a large collection of contemporary ceramics, I am well versed in contemporary trends in the field, and have many connections for my students to use when contacting prospective graduate programs and residency opportunities as they leave IU Southeast,” Harper said.

But it’s not just IU Southeast students who benefit. Artaxis also funds a fellowship worth $2,000 that enables an artist from an underrepresented population to attend a workshop. This year, emerging ceramic artist Soe Yu Nwe spent two weeks at Haystack Mountain School of Crafts in Deer Isle, Me.

The community also attends and displays its materials at the National Council on the Education of Ceramic Art (NCECA) conference.

The members of Artaxis are working hard to broaden the community and the site. The board is actively expanding the membership internationally. “Artaxis Conversations” will include artists from Sweden, Iran, Poland, Botswana, India, Japan and elsewhere.

For Harper, bringing in new voices from around the world is “probably the most exciting thing right now.”

Jennifer Forsberg is a Swedish ceramic artist who has been a member of Artaxis from the early days.

She is excited about its international growth, democratic peer-review process and presence on social media—with fast updates on members’ work via social media.

Forsberg is not alone in having reaped benefits from participation, not only in terms of promoting her own work, but also in terms of receiving creative impulses.

“I think that the regular contact with images from the large community is inspiring, and makes me realize that I am part of a great skilled and devoted community out there.”

The ability of the site to stimulate creative dialogue and connect both people and ideas is what makes Artaxis so unique.

“There really isn’t a cache of ceramic art documentation or a community of artists like us anywhere on the web, and that is why we are such a valuable educational and professional resource,” said Anthony Stellaccio, a scholar and artist in Crownsville, Md., and international coordinator of Artaxis.

With the “Artaxis Conversations,” the organization makes its contribution to National Clay Week, an event of activities at studios across the country.

Like the art on its pages, Artaxis breaks the limitations of space to unite a global community in the celebration of ceramics.

“To assemble a survey like this using another forum would be virtually impossible, if you could fathom getting these artists together in one place, physically,” Stellaccio said. This is 21st century stuff!”

Homepage photo: Neha Kudchadkar, “Painting in the form of a plate (remnants of aggression)” (detail). Courtesy of Artaxis.org.