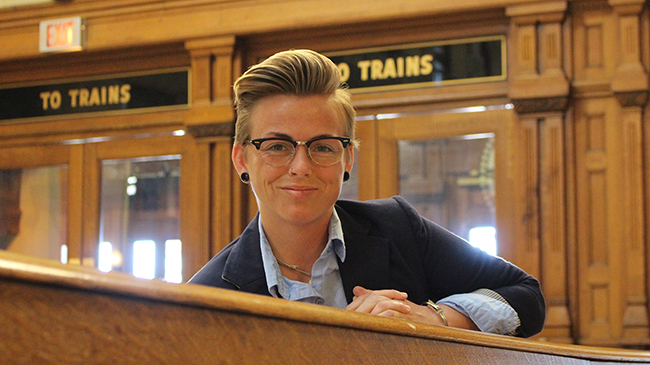 (NEW ALBANY, Ind.)—Dynamo. It’s a word you often hear when the topic turns to Robin Frederick, a senior from Mt. Olivet, Ky. majoring in human and environmental geography.

But if Frederick is in the room, the topic quickly turns to sustainability.

In the course of her career at IU Southeast, Frederick has been a force of ideas and initiative, helping advance the university’s many green initiatives while serving as chair of the Sustainability Council.

Last year, she took her special interest beyond campus, interning as sustainability coordinator for the Transit Authority of River City (TARC) in Louisville, Ky., the metro region’s public transportation agency.

At TARC, Frederick found an organization staking out a leadership role in the area of sustainability, while in Frederick, TARC found a tireless advocate with a passion for big challenges and a penchant for following through.

Frederick took on the massive project of developing sustainability metrics for the agency, establishing for the first time a greenhouse gas baseline using utility information for buildings and emissions data for the fleet.

That work was recognized this week, when TARC gained a bronze sustainability certification from the American Public Transit Association (APTA) in Minneapolis, Minn.

The bronze certification is a culmination of sorts for Frederick.

Raised on a farm in rural Kentucky, she has never lost her connection to the natural world. That connection was transformed into ecological consciousness during an early academic focus on Germany and its tradition of green thinking and political activism.

“I realized that sustainability and environmental concerns in the U.S. needed some work,” Frederick said.

Arriving at IU Southeast as a transfer student with a business-focused associate’s degree under her belt, she fused her background with her newfound love for statistics within the context of Geosciences. Through this combination of interests and abilities she became a big-picture ecology thinker with a drive for practical, workable solutions and a passion for using data to drive persuasion and planning.

“I feel as if numbers can speak volumes if presented in the correct setting,” Frederick said. “Sometimes it takes percentages and a chart to supply visual understanding.”

On campus, Frederick took the lead in areas such as composting, working with Campus Dining Services and the Office of Facility Operations to design systems that would help to green the waste flow.

“Robin has a strong grasp of the global implications of sustainable and unsustainable practices,” said Dr. Jay Barry, professor of philosophy and Frederick’s academic advisor. “But she also realizes that it is almost always about changing specific practices.”

The Sustainability Council, which met for the first time in 2013, was organized by then-student Lauren Pangburn in consultation with Barry and Dana Wavle, vice chancellor for administrative affairs. Frederick interned for the Council, then became chair.

As chair, Frederick has worn many hats. She advocates generally for social change and sustainability on campus, runs social media, leads recycling training sessions in the Lodges, contributes to higher level conversations about campus sustainability initiatives such as recycling or storm water drainage, collaborates with dining services on composting initiatives, to name just a few.

She also sits on the sustainability council at the University of Louisville, serving as a conduit of ideas and inspirations between the two institutions. Her networking with IU Bloomington’s sustainability department has advanced collaboration between the campuses, while her statistical focus  enabled her to introduce the Sustainability Tracking, Assessment and Rating System (STARS) framework to IU Southeast, allowing the university to more easily encompass and measure its performance in this area. She has traveled to the conference of the Association for the Advancement of Sustainability in Education (AASHE) to learn about cutting edge strategies for campus sustainability.

In Frederick’s view, this kind of reach helps to spread success by broadening conversations, pulling in more people and leveraging resources.

Frederick is a systems thinker. And systems work best in the absence of barriers. In sustainability, this is particularly important. Nature is a fluid system, and solutions to environmental problem, if they are to be scaled for maximum economic and ecological impact, need to imitate nature.

“Powerful things can happen when campus and communities come together in a common interest,” Frederick said.

Environmental responsibility is part of its mission statement.

In January 2015, TARC launched a fleet of 10 electric buses. It was clearly a win for the environment, but the most prominent selling point in the agency’s PR was the cost savings: the electric buses were vastly cheaper to run than the diesels they were replacing.

Environmental responsibility may be an ethical issue for many, but for it to be mainstreamed, it has to resonate economically, and for that, good statistics are essential. The quest for bronze certification was born out of these considerations.

Securing an internship position here, in response to the posted opening, was “a major coup” for Frederick, according to Barry.

As sustainability coordinator, Frederick first mastered Excel. The spreadsheet program proved a reliable foundation and communication tool for the central mission of the job: to measure and make transparent TARC’s greenhouse gas footprint.

Following recommended guidelines for quantifying and reporting transit sustainability metrics from the APTA, Frederick dove into the numbers, systematically breaking the agency down into a vast matrix of data points including kilowatt hours of electricity, parts per million of particulates, vehicle miles traveled per person, operating and idling emission rates, total annual fuel consumption, and more. She labored for months to apply formulas that could convert raw numbers from many different record systems into units of carbon dioxide, a common greenhouse denominator. She worked not only to nail down the emissions particulars of 229+ individual buses as well as the fleet, but also drew in records from Louisville Gas and Electric, Louisville Water and other utilities to apply their footprint to that of TARC, gaining emissions data for the agency’s non-mobile assets such as offices, administrative buildings, depots, machine shops and other infrastructure. 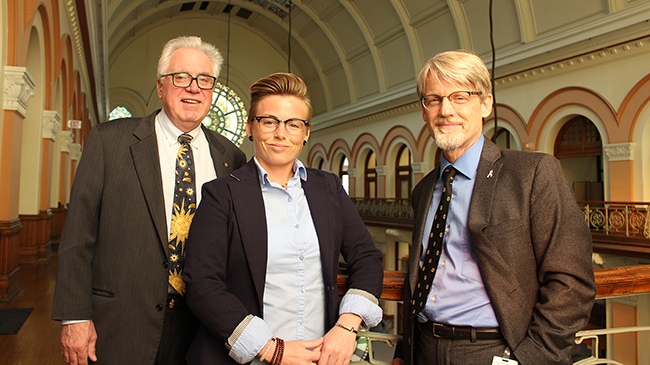 The TARC team, led by Geoffrey Hobin, capital projects administrator, helped her track down existing data, and when that didn’t exist, Frederick found a way to get it, like working with Louisville’s Air Pollution Control District to specify the quantity and constituents of emissions that each bus produces so she could calculate the impact of the fleet.

Frederick was fully integrated into the TARC team, who helped to track down the information she needed. She was trusted with access to all utility accounts, including the account for the company that removes oil removal, as she assembled workbooks encompassing the environmental identity of the agency.

“Geoffrey [Hobin] put his full confidence in me, and gave me the freedom to develop these workbooks on my own,” Frederick said. “When needed, he would give me his opinion on them and help me correct the data that was wrong or miscalculated.”

Last week, that confidence was rewarded when TARC achieved a bronze certification from the APTA. Frederick’s documentation contributed to the final proposal that also identified required action items that the agency has met, including the use of green building principles in the construction of TARC’s new training center, installation of photovoltaics, improvements in the heating system in the maintenance division and energy efficiency improvements at Union Station, TARC’s home.

If the certification was the fulfillment of one journey, it was the launch of several others for Frederick.

Already she has parlayed her internship into a part-time position as sustainability program manager with TARC, and used her experience as the foundation for her own startup: Frederick is owner of Ecomission, a consultancy that specializes in creating greenhouse gas emissions baselines that include air pollutants, waste and recycling, operations, water usage and energy in addition to greenhouse gases.

She is also now the general manager of FORward Radio (WFMP), a grassroots, community-based, FM radio station. This position grew out of her own radio show, “Lets Get Trashy,” showcasing nonprofits and businesses taking on social and environmental responsibility locally and internationally.

In addition, Frederick operates a demonstration farm as site director for Ohio Valley Creative Energy, a nonprofit devoted to educating the public about sustainable agricultural practices.

At the next AASHE conference in October, she will lead a workshop on environmental classism, helping participants develop and foster an awareness of social inequalities involved in environmental problems, and to infuse their work in sustainability with a passion for social justice.

Back at IU Southeast for her senior year, she is working with the Career Development Center to create internships for students with TARC, Ohio Valley Creative Energy and others.

Yes, the word that comes to mind is “dynamo.”

“I would be very surprised if Robin is not working as a director of sustainability after graduation,” Barry said. “She has amazing energy and a strong commitment to making a difference in how a company, a university or a city moves toward sustainable operations and living.”

Among those who have influenced her path, Frederick lists Barry alongside Aldo Leopold, Rachel Carson and Al Gore.

“They have taught me that leadership is not about a title or designation, but about impact, influence and inspiration,” Frederick said. “They have inspired me to continue to educate myself in regards to sustainability endeavors in the community, and the world.”