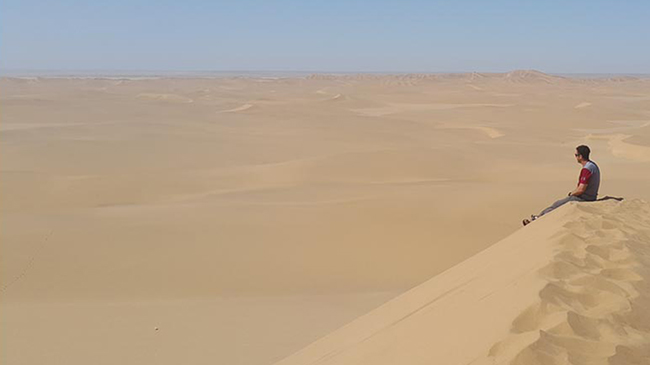 Dr. Omar Attum contemplates the vastness of the Namib Desert on the west coast of Namibia. Photo by Wade Lahue.

Namibia is situated between South Africa and Angola. Its more than than 1,000 miles of Atlantic Ocean coastline are lined with sand dunes that rise to heights of over 1,000 feet. Further inland, the landscape is a mix of savanna, salt pans, olive forests and rocky uplands providing endless vistas.

The nation takes its name from the Namib Desert, a UNESCO World Heritage Site that is one of the largest and, at 55 million years, oldest deserts in the world.

This is arid country, with some areas receiving less than 10 millimeters of water per year. Yet life thrives here, in countless fascinating forms, making it the ideal destination for field biology.

This ecosystem is familiar to Kalia Pinkston, a biology major who spent her childhood in Saudi Arabia and has fond memories of life in the desert.

“You can find plants an animals that are so specialized to survive without reliable water that they seem like they must have come from another planet,” Pinkston said.

The course, Field Bio L 303, brought students to a variety of landscapes and habitats where those adaptations were in full view. Immersion was immediate: within hours of deplaning the students were camping in tents at Naukluft in the Namib Desert. As the days unfolded, they explored forests of wild olive trees and encountered giant colonies of sociable fur seals along coastlines littered with shipwrecks, experienced endless salt pans and got close to desert elephants, zebras and other wildlife.

This was no vacation. In addition to exams, the students were immersed in the realities of professional field study, a major element of which is the compilation of a field notebook during the trip.  The notebook is more than a list of observed species. It is an extremely detailed scientific record. Each entry includes date, time, place (name, GPS coordinates and description), weather, altitude and other data points. Species identification lists include the major group, scientific and common names, and the number of individuals observed. A description of the habitat and the method of study (qualitative or quantitative) are also given. Students turn in the book at the end of the trip, and it makes up roughly half of their grade.

Loren Sieg, an adult learner and Marine Corps veteran who is majoring in biology, has also seen deserts before, during training exercises in Morocco and California. But she was excited to discover the magic red sands of the Sossuvlei dunes, iron-rich grains blown in from the Kalahari Desert. No stranger to pre-dawn departures, she gladly got up with the rest of the group at 3 a.m. to climb the famed Dune 45, which rises more than 500 feet, in time to watch the day begin.

“This is the kind of desert that you see in film, with huge rolling dunes as far as the eye can see,” Sieg said. “You regret every minute of your life if you don’t make it to the top in time to watch the morning sun rise over the ancient dunes.”

“I don’t think we went a day there without seeing zebra, oryx, giraffe, gemsbok, springbok or ostriches,” Sieg said.

Jackals and geckos were heard, black cobras and baboons were seen, while still other, more reclusive species left only hints of their presence.

“We found leopard scats and the tracks of brown hyenas, a very shy and rare species,” Attum said.

Like other desert species around them, the group ventured out in the relative coolness of night, tracking snakes, lizards and other animals.

At the park’s famous watering hole, they witnessed dramas playing out, day and night.

For Wade Lahue, a junior majoring in biology with a primary interest in reptiles, the watering hole was was an overwhelming experience.

“The hours spent there were some of the best in a lifetime,” Lahue said. “Looking through my binoculars at a female black rhino drinking, with her reflection in the perfectly still water and around that, the reflection of the stars above, I thought to myself, ‘This is a moment I will never forget.'”

Another unforgettable moment for the whole group was served up in a local restaurant:  mopane worms.

“They are large worms that look like grape leaves when cooked,” said Attum, who described them as “a delicacy.”

The group partook, with reactions ranging from gusto to what-doesn’t-kill-you-makes-you-stronger. There were a few exceptions—Sieg, for one, couldn’t quite close the deal.

Cameraderie is always a big part of Field Biology, and has a lasting value in reinforcing the sort of teamwork that underpins scientific inquiry, both in the field and in the lab.

“You live with people who may have wildly different world views,” Lahue said. “Learning to work around that, and get things done, is something that is very important once you return from the trip.”

The field notebook may be a record of individual observations, but in the end it is a contribution to a group experience, serving the larger community of researchers known collectively as “science.” This consciousness becomes ingrained during the Field Study experience, a process accelerated by the bonding only travel can provide. In running/falling down giant sand dunes at daybreak and enjoying/enduring one another’s Pandora channels, participants in the Namibian adventure became a team.

“Being out in the wild, looking for animals, documenting our findings—this is what I want to do with my life,” Sieg said. “Having the opportunity to do just that with IU Southeast in one of the oldest deserts on the face of the Earth was an absolute privilege.” 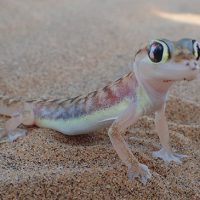 Web-footed geckos thrive on the dunes. Photo by Wade Lahue. 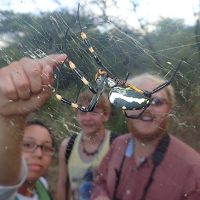 Students examine an orb weaver and its massive web. Photo by Wade Lahue. 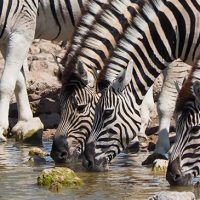 Zebras are a common sight at the watering holes of Namibia. Photo by Omar Attum. 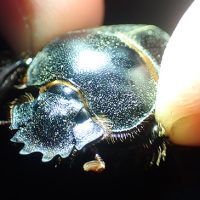 The tiny scarab, a totem in ancient desert cultures, is at home on the dunes. Photo by Omar Attum. 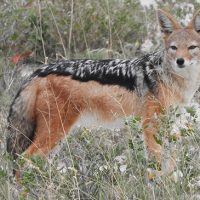 The black-backed jackal is an ancient and highly adaptable species. Photo by Beth Rueschhoff. 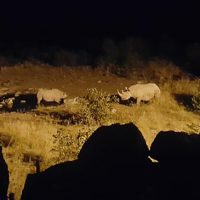 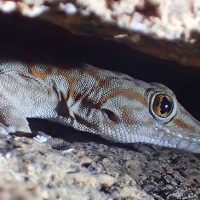 A fan-footed gecko spends the daytime hours in a cool crevice. Photo by Wade Lahue. 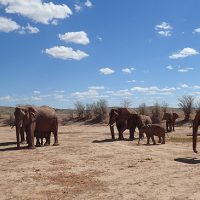 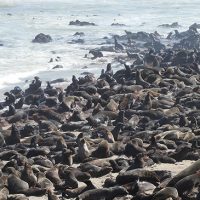 One of the world’s largest fur seal colonies is at Cape Cross. Photo by Loren Sieg. 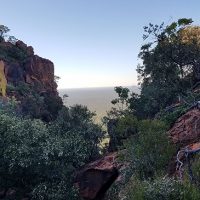 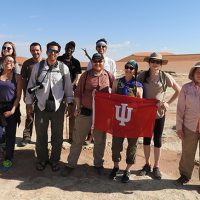 The Field Biology team brings the colors to the Namib Desert.