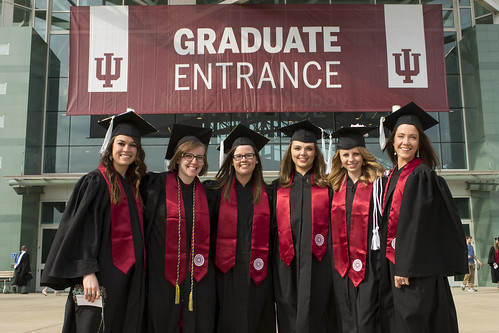 The Class of 2017 consists of 993 candidates earning 906 bachelor’s degrees, 99 master’s degrees and 14 associate’s degrees. Thirty-three students walked across the stage at Freedom Hall in Louisville with a perfect 4.0 grade point average.

“You, the members of the Class of 2017, are on the cusp of actualizing IU Southeast’s vision to shape the future of our region,” Chancellor Ray Wallace said in his remarks to the class. “You are this region’s next leaders, next innovators and next creative minds. You are our future.”

Jessica Pilkerton, a secondary education major from Louisville, delivered the class response. She highlighted her journey to overcome her own personal trials with the help of an inspiring education professor and the rest of the IU Southeast community.

“As a future teacher, there will come a day where I will share my story, my failures and successes, with my students,” Pilkerton said. “I will push them to be that first generation college student who won’t ever give up, just like I was pushed in Mrs. (Ann) Jones’ classroom. Now it’s my turn and all of our responsibilities to fulfill that promise to the future generations of leaders and learners.”

The Class of 2017 ranges in age from 20 to 65 and hails from 31 Indiana counties, 10 U.S. states and 16 countries of origin. Thirty-six percent of these candidates became the first in their families to attain an undergraduate degree.

IU Southeast has awarded more than 27,000 degrees since 1968. Nearly 85 percent of graduates remain in Indiana and the Louisville metropolitan area.

Check out the sights and smiles from the Commencement ceremony in the Flickr album at the top of this post.

The server is temporarily unable to service your request due to maintenance downtime or capacity problems. Please try again later.

The server is temporarily unable to service your request due to maintenance downtime or capacity problems. Please try again later.