(NEW ALBANY, Ind.)–At this time next year, each IU regional campus could be supporting a vibrant network of Fresh Stop Markets that connect families and others experiencing food insecurity, including students, to locally grown organic produce, at prices they can actually afford.

That’s the vision of Melanie Hughes, associate librarian at the IU Southeast Library and her interdisciplinary, inter-campus team. In January, Hughes’ group submitted a grant proposal called “Feeding Minds, Building Community, and Eating our Vegetables” that proposed turning that vision into reality by giving students the skills to work for food justice.

The initiative supports Blueprint 2.0, the strategic plan of IU’s regional campuses, and is directly aligned with the university’s Bicentennial Strategic Plan, which provides a roadmap for the university’s efforts to remain among the best public research institutions.

Hughes’ project is one of only two proposals awarded this year.

Food insecurity is defined by the U.S. Department of Agriculture (USDA) as a household-level economic and social condition of limited or uncertain access to adequate food. This can happen as a result of individual family issues, but also on the community level, in so-called food deserts, where large numbers of people in a geographical area are underserved by the current food system. 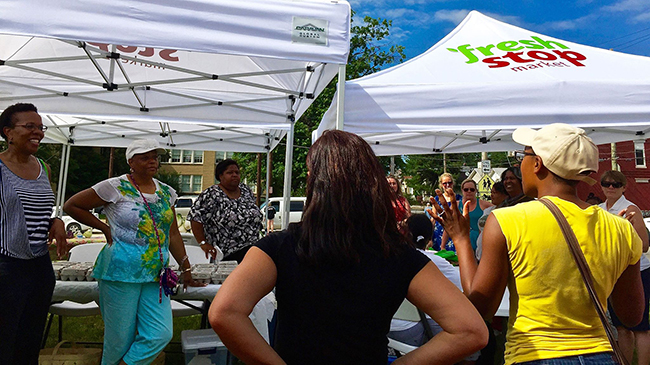 In these areas, the poverty rate typically soars above 20% and one-third or more of the residents must drive, bus or walk over a mile to the nearest grocery store.

This is the situation in downtown and West Louisville, which have been identified as food deserts. There is one grocery for every 25,000 residents (compared to 1:12,500 statewide) and in one part of downtown, over half of the residents have no personal means of transportation. People in this and similar zones rely on whatever food is at hand, not what is the most healthful, and that usually means fast food. Sometimes these areas are also called food swamps.

For this reason, living in a food desert is linked to a greater likelihood of health problems such as obesity and diabetes. A study by the Greater Louisville Project demonstrated that people in certain zip codes of West Louisville live almost a decade less than residents of more prosperous East Louisville neighborhoods.

College campuses are not immune from these trends. Nationally, campus food insecurity touches 12-25% of the US college-going population, according to recent studies. That adds up to more than five million students.

No surprise, then, that the College and University Food Bank Alliance (CUFBA), an organization of campus-based programs focused on alleviating food insecurity, hunger and poverty among college and university students, has 488 members with campus food banks, including IU Bloomington, IUPUI and IU South Bend.

The effects—simple hunger and malnutrition are among the most common manifestations—can be profound, compounding the normal pressures of academic and campus life.

“Not knowing where the next meal is coming from is a problem that most of us have never known, but it adds a major obstacle to low-income students’ already complicated lives,” wrote William McKinney, senior advisor for IU regional campus affairs, in a recent white paper. “Worry for oneself and others, and even hunger, distract affected students’ minds from their studies, and place them at a severe disadvantage for persistence and progress to graduation.”

McKinney surveyed food insecurity on IU regional campuses. He found it to be present everywhere, yet also recognized efforts of individual campuses to address it, such as the IU Southeast Emergency Food Pantry. Hughes and her team recognized that the time was ripe for a larger-scale project that could bring together the regional campuses in a concerted and systematic push.

Hughes’s project addresses food security on both the campus and community level, linking the two in a virtuous cycle of service learning and local impact.

The project will use the grant as seed funding to lay the groundwork for the project’s more active phases. This initial part will focus on research to support requests for external funding and to determine what is needed to replicate the model in other localities. The goal is to eventually hire students on each regional campus to engage in applied research and community organizing, and to create access to affordable, fresh, locally grown organic produce purchased wholesale for members of those communities from Indiana farmers.

The students would collaborate with New Roots Inc., a Louisville-based food justice movement that has operated its Fresh Stop Markets since 2009. This model is entirely distinct from traditional farmer’s markets or community supported agriculture (CSA) ventures.  Shareholders buy shares that range from $12 to $40, based on income. The share money is pooled to buy produce from local farmers at wholesale prices. The Fresh Stop Market is then held bi-weekly at local churches or community centers in fresh-food-insecure neighborhoods. Shareholder volunteers work behind the scenes to recruit chefs, make decisions on produce purchasing, and set up and staff the market. Each shareholder receives the same amount of food, regardless of the size of her or his contribution. A typical Fresh Stop Market delivery includes 10 varieties of local, organic produce, depending on season and availability.

Fresh Stop Markets are more than food distribution events, they are places for residents and volunteer shareholders to gather, learn about farming and build relationships. At every market, a chef hosts a cooking demonstration and offers samples and recipes for the produce each shareholder receives. Food justice workshops and training sessions help to organize volunteers around the central mission and best practices.

“The grant means that we will be able to focus on sharing the basic tenets of food justice with each other, getting students more involved in the community and vice versa, and work to combat food insecurity and food injustice in Indiana,” Moskowitz said.

A fresh market of skills

In addition to researching across disciplines on food insecurity, organic farming and community organizing, the students will use mapping tools to identify and database potential wholesale providers within a radius of 150 miles create database. Having identified barriers to students consuming fresh local produce – be they financial or cultural – and explored the literature, history and economics of food systems, the students will be ready to lead food justice workshops to educate the wider community about food access inequity.

Guided by New Roots, Inc., the students will recruit shareholders in regional communities, and work together to pool resources so that they can buy fresh produce cooperatively. Other service learning opportunities may be to map nearby food resources for students, identify chefs who might be interested in serving local organic food, and building funding mechanisms to create a sustainable infrastructure for Fresh Stop markets in their communities.

Toward the greater good

This project is no ordinary work-study stint. It is service learning with the potential to change the world for the better.

“Students need to learn from others how to become socially engaged citizens,” Hughes said. “Millennials and Gen-Zs both want to make a difference in the world, we need to harness their enthusiasm and mentor them in the right direction.”

The project brings multiple stakeholders to the table, literally and figuratively. Everybody wins.

Farmers gain a predictable market for organic produce through reliable sale and distribution of shares (and don’t need to spend time retailing their vegetables at farmer’s markets). Students in the program would gain knowledge and experience, while their classmates on campus could enjoy better health through broader dietary options that they can afford. The universities win through making a direct and tangible contribution to the quality of life in their regions. Finally the communities benefit not only through the expansion of healthy foods, but in the relationships both with farmers and the regional campuses.

“The impact on the health of vegetable consumers will be positive on a cellular level, but also on on mental health and well-being as students become part of a regular, engaged, community organization, committed toward the greater good,” Hughes said.