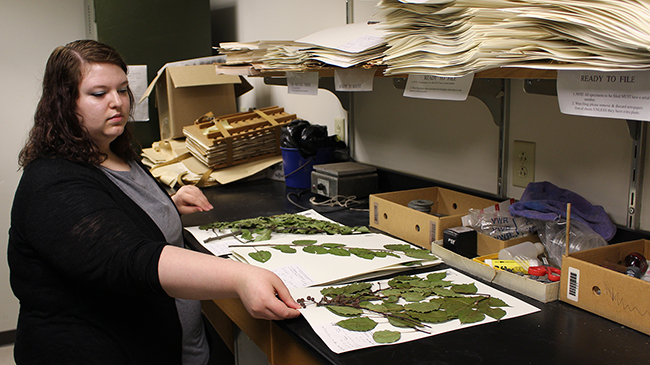 Sierra Ash examines specimens collected in the region at the IU Southeast herbarium.

Tucked away behind an unassuming door in a hallway of the Life Sciences building is the IU Southeast herbarium, a collection of nearly 8,500 dried plant specimens from the university’s five-county service region.

The collection is eclectic. It was begun in the early 1970s by Dr. Richard Maxwell when IU Southeast was still located in Jeffersonville. Maxwell needed to be able to borrow certain tropical plants for his research, and in order to do this, he needed an herbarium. It has occupied a dedicated, specially-designed space since 2000, when the Life Sciences building was renovated.

Born of necessity, the IU Southeast collection grew through patient and dedicated sourcing by faculty and community partners, and through the addition of other, smaller collections that were being shuttered, such as that once maintained at Floyd Central High School. Some of these additions predate the herbarium itself, giving the assemblage an intriguing reach in both time and space.

With its handmade wooden presses for field collection and lightly scuffed metal cabinets for systematic storage of mounted samples, stacks of specimens waiting to be catalogued, atmosphere of unfazed tranquility and just the right amount of clutter, the space may strike some as a relic from a bygone era of natural science.

In fact, the herbarium is helping to lead the way into a digital future for IU plant science, and plays an increasingly important role in the effort to identify invasive plant species that not only damage native vegetation and the ecosystems built around them, but also undercut the regional economy.

A good herbarium is hard to find. They tend to be labors of love, and subsist on sometimes meagre but always dedicated rations of time and energy donated by passionate plant people. There is collecting, sometimes randomly, sometimes with a purpose, then drying, inspecting, identifying, mounting, and outfitting with data on the collection event, such as date, time, GPS coordinates, and the like.

“Our purpose is to ensure that there will be a specimen here of any plant found in this area,” said David WinshipTaylor, professor of biology and current curator of the collection.

At IU Southeast, the specimen information is entered into a database to aid researchers and borrowers in plant identification. Requests to see samples come from other parts of the country and, indeed, all over the world, with Europe leading the way, due to ecological similarities with the Ohio Valley.

As the only functioning university herbarium in the area, with a collection and a full-time curator, the IU Southeast collection provides an important resource in a dynamic bioregion.

While much of the collection is built by faculty and volunteers, often out for weekend walks in state parks or along the Ohio River, the herbarium also benefits from partnerships with community organizations.

For example, when The Nature Conservancy purchases or receives a parcel, the land is assayed by consultants who use the herbarium as a repository for plant specimens and as a source of expertise for species identification.

The informal relationship helps feed the collection with new samples, filling in spaces of the regional map. Sometimes this results in a new occurrence of a plant in the state. This information, in turn, helps the organization determine the value and best use of the property, such as potential donation to the Department of Natural Resources as a state park.

Over the past decade, Taylor and his colleagues have created a database for the collection, and have also begun digitizing it—adding photographs of databased plants where possible, and putting the available information on a dedicated website with a simple search function.

Now, with donations and funding from the Office of Academic Affairs and the School of Natural Sciences, they are moving to systematically photograph, mount, identify and label every plant in the collection. The files will then be uploaded to a cloud system and made available to the world.

This project is being coordinated with the herbarium at IU Bloomington. That collection of nearly 200,000 specimens is digitized, but not databased. Working together, the two teams are annotating the complete holdings to make sure that the names are current, clearing up misidentifications and nailing down the geographic locations and distributions of plants. 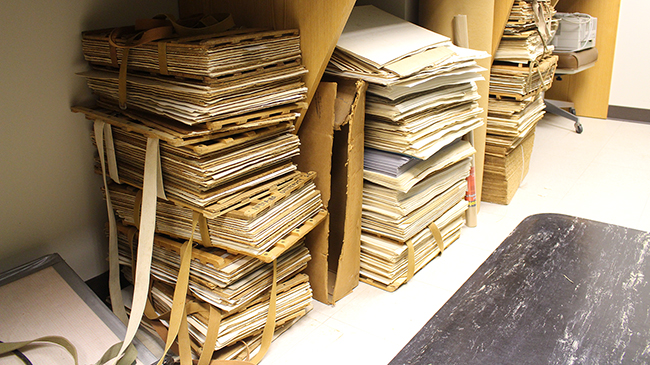 Plants collected and then dried in these presses will be catalogued and uploaded to the herbarium’s database and website.

Taylor’s dream is to make this information more available to scientists and others in the field, through the design of an app.

“We’re hoping to combine the data of when and where the plants were collected, and whether they were in flower, and other points, so that if you were to walk outside in Indiana and find a white flower, you could access a picture of it, and based on the GPS information about where you are standing, you could know what it is.”

It’s not uncommon for some of the plants found in our area to be non-natives. This is increasingly seen as a problem, both ecologically and economically.

According to the Invasive Plant Advisory Committee to the Indiana Invasive Species Council, a body founded in 2010 to address these issues, management of invasive species cost state agencies, municipalities and land trusts nearly $6 million dollars in 2012, the year for which a comprehensive survey was performed. And this survey just encompassed forests, prairies, wetlands and natural areas, not privately held agricultural zones. Nearly 50 invasive species are being managed, consuming the equivalent of 50 years—each year—in labor.

Taylor and his colleagues communicate their observations to the Indiana Department of Natural Resources, which is tasked with tracking and eradicating invasives. They report every invasive, along with the GPS coordinates of where it was found.  Sometimes they meet with state naturalists or park managers and show them the collection sites.

For the herbarium, it’s a new challenge, and a new role, involving both faculty and students.

“This is a good area to find invasives,” Taylor said. “As an indicator area, you couldn’t do much better.”

The Falls of the Ohio have always been biologically significant, according to Taylor.

“This is where the bison crossed the river,” he said. “And there are some interesting plant species that followed the bison routes, right up into the Knobs.”

Add to this the trucks, trains and boats that humans have added, and you have a great delivery system for nonnative plants. Changes in climate also give some species better chances than others, allowing some species to expand their range into the area. One example of this would be alligator weed, which has jumped the river from Kentucky into Indiana—a discovery of herbarium volunteer Bill Thomas.

Another is the Bradford pear tree. Half a century ago, the Bradford pear, a cultivar of the callery pear (Pyrus calleryana), was a landscaping prodigy, partly because it had been bred not to self-pollinate or make fruit. Beginning in the 1950s it was planted widely.

“It was well behaved and wouldn’t spread,” Taylor said. “Now it has developed a genetic mutation that has allowed it to spread.”

Today the white-blossomed trees are proliferating along roadways, in fields, just about everywhere—including the IU Southeast campus. It is now on the Council’s list of invasive plants, alongside Asian bush honeysuckle, burning bush and other species still sold by nurseries.

Bradford pear trees were planted on campus some years ago.

Sierra Ash, a graduate student in the Master of Interdisciplinary Studies program, has been studying the population of wild Bradford pears that appeared about four years ago in a wild grove on the south side of campus. At that time, when the trees were first discovered by Taylor, there were a couple. To date Ash has tagged 30, and there are more waiting to be tagged.

“They’re doing better than the native species,” Ash said. “That’s why there is a concern, for the ecological balance.”

The pears at IU Southeast have never been officially reported. The descriptive study by Ash will be the first step in this direction. After the descriptive study, she will move on to a genetic study, to narrow the potential sources further. It will examine whether the pears developed genetically from pears planted intentionally as ornamental landscape trees on campus, or whether they developed from trees located somewhere else.

For these studies, the combination of field research with the resources of the herbarium have been constructive. Originally focused on wildlife biology, Ash switched to plant science in her senior year, and was introduced to the collection. Now she considers it a “sanctuary” where she has deepened her interest in invasive plants, and discovered some unexpected sides to her own experience of the discipline.

“In biology, there is so much emphasis on science, but this is a really good place to incorporate art,” Ash said. “When you dry the specimen and put it on the paper in a certain way, it’s like a natural form of art.”

Located at a biological crossroads, in an era of accelerating climate change and habitat modification, the IU Southeast herbarium is best viewed as a process, and less as a fixed place.

That process is the constant drive to expand the scope of what is known, and to keep up with alterations to that which is already documented. This is no plant museum, after all, but a record of past, current and future change.

“People assume you know all the plants where you live,” Taylor said. “But just like in the tropics, there are so many plants we’ve never seen.”