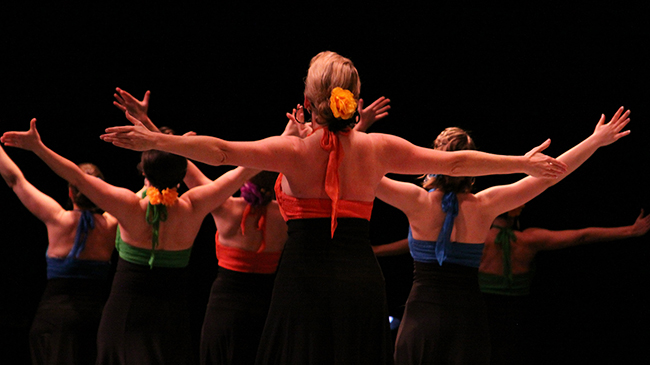 (NEW ALBANY, Ind.)—Flamenco dancers, Celtic bagpipers and food from around the world highlight a rich and varied program for this year’s International Festival at IU Southeast.

The Festival takes place Tuesday, March 21 from 5 to 8 p.m. in the Hoosier Room.

A fixture of the academic calendar, the International Festival is organized by the international programs committee and becomes a reality through the tireless contributions of nearly 100 faculty, staff, student and community volunteers.

“The Festival is the only internationally focused event in our Southern Indiana counties,” Abshire said. “It is great to show the surrounding community that IU and IU Southeast have a global mindset and that we’re committed to preparing our students to thrive in a globalized world through internationalized education in various forms.”

Headlining the festival are dancers from Flamenco Louisville, the oldest flamenco organization in the area. Louisville boasts a uniquely vibrant flamenco scene, according to the group’s director, Diana Dinicola. The organization provides a home for performers, students and aficionados, and offers classes, workshops and educational programs, all enriched by regular visits by mentors from Spain. Dinicola and other members also travel to Spain, helping the organization deliver flamenco that is authentic on both the music and dance levels.

“Flamenco allows us to express all of our emotions,” Dinicola said. “The responsibility of the performer is to describe an emotional landscape for the audience and take them through it.”

Dinicola appreciates the interplay between formal aspects and individual or improvised expression. A certified flamenco educator herself, she appreciates the opportunity to share flamenco with university audiences.

“Performing specifically at a college campus is always exciting because of the environment of intellectual inquiry,” Dinicola said. “As an art form that is synthetic in nature, requiring multiple levels of involvement and cross-disciplinary skills, encountering minds that are engaged in similarly synthetic thinking generates great energy and interactions.” 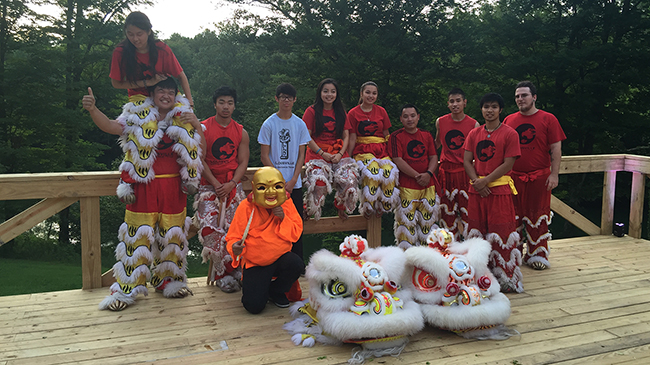 “Like a family”–members of the Louisville Lion Dance Team. Photo by John Le.

Everything has a reason

In the lion dance from mostly Asian cultures, the focus is more symbolic: the lion is designed to scare away evil spirits while bringing good luck and fortune.

For the dance, two people inhabit the intricate and symbolically rich lion costume, and mimic a lion’s movements in a series of complex and formalized steps.

The lion dance will be performed by Louisville Lion Dance Team, led by its founder, Ryan Ho. The group came together in 2004 and was officially launched in 2010. The aim is a mix of cultural performance and good-natured entertainment through the dance, which is usually performed during the lunar new year and other religious festivals.

“We’re like a family really,” Ho said. “We’re not only sharing the Asian traditions and education, but we’re bringing happiness and fun to all those around.”

While the origins of the dance are not certain, and different versions of the dance exist, the movements themselves are variations of those found in traditional martial arts.

And like martial arts, lion dancing is more than a series of steps. It is a devotion, a meditation and a skill that involves the entire human being.

“It’s both physically and mentally challenging,” Ho said. “Patience, perseverance and indomitable spirit come as the lion dance is very difficult, and you can’t always expect to be able to do it right off the bat.”

The dance is a self-contained universe of sorts, with a symbolism that extends beyond movement into the colors and drum rhythm sequences used.

“Everything has a reason,” Ho said. “Every aspect of lion dancing plays an important role in the overall meaning of the whole, from each musical instrument to the designs on the lion costume.” 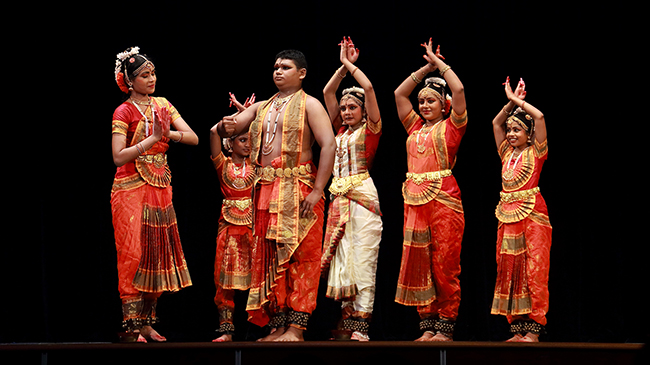 Practioners of Bharatanatyam, a sacred dance of India, from the Guru Vandana Arts Academy. Photo courtesy of Akila Iler.

Indian dance also unites the physical and the metaphysical, a harmony brought to life in many traditional forms and rituals.

“Imagine the oldest events of history and then imagine something older than that, something ageless,” said Akila Iler, director of Louisville’s Guru Vandana Arts Academy. “Through the sacred Indian dance called Bharatanatyam, I explore this history of culture, art and religion.”

In Bharatanatyam, movement and spirit truly meet. For 16 years, Iler has given lessons in Indian classical dance, teaching the intricate codes that tell sacred ancient stories using hand gestures. this union of dance and philosophy mirrors Iler’s own journey.

“At Guru Vandana Arts Academy, my students and I discover the God within us and present these thoughts in the form of dance,” Iler said.

The dense fabric of culture—woven of music, dance, food and shared history—comes to life in the exuberant  Greek music Kosta Skandamis and the folk traditions of the ancient Silk Road, performed by the Crescent Moon Dance Company. Opening with Celtic bagpipes, an ancient form of instrument, performed by Jennifer Gordon, director of of the IU Southeast pep band, the Festival concludes with a contemporary offering from Africa, the Zimbabwean marimba, introduced only 40 years ago, performed by the Louisville ensemble Zim Marim.

It takes a campus village

The International Festival brings people together before it even takes place, both on and off campus.

Co-director Scott, for example, visits as many festivals as possible to line up dance and music performers. And there are criteria for the food, which must not only taste good and provide a sample of global diversity, but also deliver a well-rounded meal—as well as an educational experience.

“Food is a fundamental part of culture and is shaped by religion, economics, geography, history and other factors,” Abshire said.

In addition to the performances, 17 internationally oriented groups from the community will staff information tables, joining campus groups in promoting their cultural and educational offerings.

“It takes a campus village for us to highlight our global village,” Abshire said.

“This is our opportunity to show that IU Southeast values diversity, promotes international awareness and gives to the community a glimpse of the world, right in our backyard,” Scott said. “Our commitment to this yearly event shows that we value differences, we understand, respect and hold in high regard the beauty and richness of world cultures.”