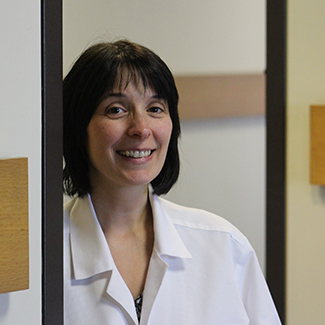 There was a first attempt. It didn’t go well. He looked to her as if she might do it for him. She looked back. He took the shoes off by himself and looked at them. He put them on a different way. Still no luck. He took them off again and asked her for some help. She looked at the shoes and suggested a new method. No success. He put them down and started to get frustrated.

“We broke it down into steps,” Kahn said. “First the opening, then the putting on, then the fastening.”

A little later, she was working with her research methods class, a notoriously daunting and often dreaded year-long rite of passage for junior psychology majors. It felt like déja-vu.

“I gave the students a whole bunch of data, and they began to freak out a little, so when that happens I say, ‘Stop. What do you have to do here? What do you notice there? What’s your next step?’” Kahn said. “I walk them through the steps and tell them, ‘I’m going to stand here as your support system—you know what to do, so you can do this.’”

Students aren’t toddlers. But as budding scientists, they too struggle with tasks that appear too tough and expectations that seem too high. As their instructor, Kahn is true to a vision of teaching that seamlessly blends the personal and the professional in a way that helps her students grow as researchers and human beings.

Students enter the IU Southeast psychology program with more assumptions than skills and finish as practitioners of the scientific method capable of graduate-level research or entry into the workforce in one of many fields related to the disciplines.

While there are many steps in the progression, it all starts with learning how to read.

Of course, all students know how to read, or they wouldn’t be in college.

But just because they can tear through a novel by Virginia Woolf or a biography of Dali or a blog on environmental protection or even a historical monograph on the German resistance to Hitler doesn’t mean they know how to properly read and analyze a research article in a scientific journal.

Kahn helps students develop that skill, and in so doing, enables them to access the world of scientific thought and practice.

Research articles are the universal language of the scientific world, across all disciplines. There is an accepted format for telling the story of an experiment—from what it was trying to achieve and why, and how it was set up, and what happened, to how the outcome compares with expectations and what other people doing similar things have discovered, all the way to what it all means.

Consider it written in stone.

It’s a daunting edifice, built on a foundation of dry prose enlivened only by numbers, charts, citations and maybe, if you’re lucky, photos. Needless to say, trying to evade its suffocating rigor while gleaning the gist is a time-honored student tradition.

Kahn knows this from personal experience.

“I remember being a student and first reading articles, and there was so much content!” Kahn said. “I had to get through it somehow, so I wouldn’t read the headings, I ignored anything in parentheses, and I skipped over all pictures, tables and graphs.”

That was the wrong approach, as she soon found out.

“That’s where all the important information is,” Kahn said.

Helping students to move through that edifice systematically, patiently and thoughtfully is the essence of Kahn’s challenge as an educator. In this context, innovation is not an option, it’s a necessity.

Big leaps out of nowhere

“We always have this idea that learning happens in a slow progressive curve,” Kahn said. “That is not at all how it is. Learning happens like this: you’re puttering along, and you’re feeling like you’re making no progress, and then you make a big leap, and it happens seemingly out of nowhere.”

Knowing this, and understanding different learning styles, helps her motivate students who are ready to give up. Instead, she challenges them to ramp up their effort when the going gets tough, banking on the inevitable breakthrough.

Kahn immerses students in scholarly articles through a process that is structured at the macro level—with a syllabus and rubrics and a classroom routine that a drill sergeant would be proud of—and informal at the micro level.

“This is a science class,” Kahn tells her students. “I am going to treat you like scientists.”

That means strict adherence to deadlines, operational definitions for attendance and class participation, and steadily increasing levels of responsibility.

Students learn to work with data sets and statistics in testing hypotheses. They learn to differentiate between case studies, observation and true experiments. They learn to take tests and then analyze the results using the same statistical methods they have been tested on. They kick the tires on research designs until their toes ache.

At the same time, students are encouraged to explore, reflect, share personal impressions, and develop the confidence and trust to present their own ideas. They do this both during class and on their own, where they enjoy the flexibility to learn at their own pace via readings, podcasts, videos and other means.

To counter the eternal yet ill-advised reliance on abstracts as a sort of Cliff’s Notes shortcut to success, Kahn sometimes deletes this element from the assignments altogether, challenging students to confront and control the other sections without the summary in mind, in order to create their own version of an abstract from the methodology and data they have analyzed.

In her introductory courses in psychology, Kahn flips the script entirely: instead of pounding the journal article template into her students’ skulls, she lets them explore and deconstruct an article, usually in pairs. They identify the different parts, reflect on the purpose of those parts within the whole, consider how this form differs from other more familiar sources of information, and so forth. They then resurface and compare insights as a group, before diving into the material again, going ever deeper, asking more serious questions about how the scientific method is reflected in the article.

In her course on research methods, a two-semester epic that lays the groundwork for the capstone, Kahn works hard to dispel the view that the methods section of any article is just a manual for assembling lab equipment. In fact, it’s what makes the article a real contribution to science because it provides a structure for replication—the ultimate determinant of scientific success.

It may initially seem tedious to wade through the design of an experiment. So Kahn stresses the ways in which the methods section puts the tools of inquiry in the hands of the students. She encourages them to see research as creative endeavor, and the design process as a tool to gain answers to their own questions.

And those situations, Kahn makes clear, should belong to the students.

The class isn’t about finding the right answer—the most perfect research design―it’s about balancing options in the context of one’s individual goals.

From the first day of class, Kahn hammers home a very simple message: This is not about jumping through pre-set hoops, this is really about you.

“I try to be a guide only, because I want the students to take ownership of it,” Kahn said. “I want it to be theirs.”

At the same time students are learning to make the project truly theirs, they are also implicitly expanding their own relevance.

By practicing science, they become full-fledged participants in the ongoing global conversation of scholars in their field.

“Scientists exist within a larger community and at the end of an experiment they need to share their work with that community in order for their own work and the work in their field to progress,” Kahn said.

If you can’t take the heat, stay out of the lab

Once an article is written, and prior to final acceptance and publication, it is sent out to the community of subject-matter experts for critique. This peer review process is a normal, healthy and essential part of the scientific life, and indeed academic life as a whole.

For many beginning students, the prospect sounds like a firing squad.

From Kahn’s point of view, impassioned or strongly-worded critiques and rebuttals, and the ability to withstand them, are not merely necessary evils, they are the ingredients of a healthy and productive scientific culture.

“This is part of our field, to be evaluated by people who have a knowledge base similar to your own in the area,” Kahn said. “No one is exempt.”

Kahn’s own lab coat has received its share of rotten tomatoes over the years, a fact she recalls with a shrug or, at most, a dispassionate “ouch.” Once they are cultivated, investment and ownership are powerful motivations, driving researchers to assert and defend with vigor. In exposing students to the sometimes heated give-and-take of ideas, Kahn helps them move away from taking criticism personally, and focus on the research.

To the extent that everyone’s performance, in every field, is subject to critique or review, Kahn sees this training as a sort of universal life lesson.

The same can be said of the ability to break down a journal article into its constituent parts, analyze them individually, and assess the validity of the whole.

The experience has given Kahn herself a new perspective on her role in the classroom, and on the image of academics, specifically scientists, in the eyes of students.

“We have this stereotypical view of a scientist as an old white man in a white lab coat, by himself,” Kahn said. “In reality, scientists look like all sorts of people—moms, birdwatchers, people who like to cook, whatever you can think of.”

When the stereotype is stronger than the reality, students don’t see scientists who look like they do, and find it harder to think that they could fit into that world. That might suppress the inclination to aspire, push and ultimately succeed in a scientific career.

This is especially important for female students, Kahn believes. As a young academic in a field dominated by men, she was determined to do whatever it took to have both a strong professional life and a full personal life.

Seeing Kahn so openly balance the demands of teaching, research and parenthood gives students—especially women―a window on the profession they might not otherwise gain.

Kahn wants her class to be an open book on the profession, not just on the subject matter. She wants students to see that the lives of scientists can be messy. In fact, the whole scientific method, in its fundamental embrace of failure as a learning experience, is messy. And that is what makes it a workable model for moving through a messy world, be it helping your son to fasten his shoes or helping a student calculate their deviation from the mean number of Facebook friends. Most of all she wants students to learn how to keep going, despite that messiness, to develop the essential quality she calls “resilience.”

Not surprisingly, Kahn’s source of innovation isn’t theoretical, but practical. Her mother, a high school history teacher, and her own high school earth science teacher were important role models. Both were women who were deeply excited and enthusiastic about their fields, setting a positive tone that later helped Kahn find her direction.

But it was the experience of tutoring summer school to second graders while still a student herself that had the biggest impact of all.

“I saw that when someone isn’t doing well, it’s not because they don’t want to, it’s often because they think they can’t,” Kahn said. “And a lot of times, you just need to approach things differently.”

Finding ways to convey her own excitement for subject matter as technical as scholarly articles and research design is a talent based on an insight that is fundamental to the teaching of any subject.