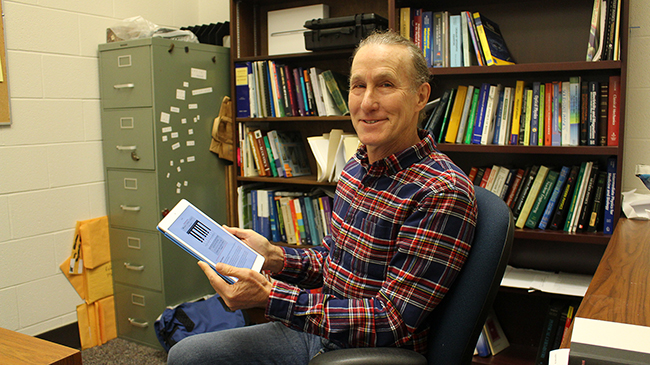 Books on sound usually provide graphs or illustrations of vibrational waves over time, but to the student trying to understand what actually happens when sound is being made, this approach is not always that helpful.

Now IU Southeast Professor of Physics, Kyle Forinash III has co-published an ebook on sound that will make it easier for students to actually see and hear what’s going on when, for example, a tuba player purses his lips or a Tuvan throat singer sings two notes at the same time or an MP3 download is stripped of bits or a noise passes through an eardrum.

The book is called Sound: An Interactive EBook, and is available on iTunes. It’s his second collaboration with colleague Wolfgang Christian of Davidson University to be distributed through iTunes, following Waves (2015). But in contrast to the specialist nature of that book, Sound is designed for laypersons and the general public, as well as for use in introductory physics classes. It is also useful for acoustical engineers and people interested in music studio production, including those enrolled in the bachelor of science in music’s audio production concentration, for whom Forinash’s class is a requirement.

The book covers concepts such as position, time, velocity, pressure, resonance, Bernoulli’s principle, the laws of thermodynamics, magnetic forces and many more, as they apply to sound, acoustics and musical instruments.

And it does so in a format that combines text with interactive elements, integrating sound clips, YouTube videos and other online resources, as well as 33 simulations that allow the reader to manipulate variables and drive the action.

“When you draw a picture of a wave, it’s just sitting there, static,” Forinash said. “But in a simulation, you can see things moving around, and even make them move around—you can make sound happen in real time.”

In one example, a sound wave is known to pass through a material like air or water. A traditional representation might show a sound wave passing through a group of molecules in a before-and-after way. In Forinash’s book, the reader can move the wave through the molecules at whatever speed is desired, and see the effect.

In the same way, the simulations enable the reader to explore the concept of dissonance, and their personal sensitivity to it, by widening or narrowing the gap between two frequencies they are listening to.

“This is not just a sound sample, but you can adjust and see where the break is between beats,” Forinash said.

Other parts of the book are devoted to the physics of sound of musical instruments and the effect it has on the human brain and perception. The interactive nature of the exercises, combined with text and examples that are easily understood by non-scientists, give the book both an interdisciplinary flair and a relevance beyond the academic audience.

Preparing the material for the ebook was laborious, as Forinash and Christian transitioned the concept from class notes to a webpage with interactive elements to the final form of an interactive textbook, working hard over the past several months to ensure that the many multimedia components were aligned with the platform’s rigorous standards. With JavaScript replacing Java as the standard programming language, expanded interactivity is permitted, and the book takes full advantage. Forinash and Christian were greatly aided in their work by developers of the Easy JavaScript Simulations, colleagues Francisco Esquembre and Felix Garcia Clemente at the University of Murcia in Spain. In terms of sourcing the raw material for the many simulations, the authors worked with the immense resources of the AAPT/ComPADRE digital library, specifically the Open Source Physics collection.

Forinash believes the format is well suited to teaching about sound. The book doesn’t just tell about sound, it is literally filled with sound.

“I think this is the way books are going to go,” Forinash said.

Homepage photo: an interactive simulation from Sound: An Interactive EBook.