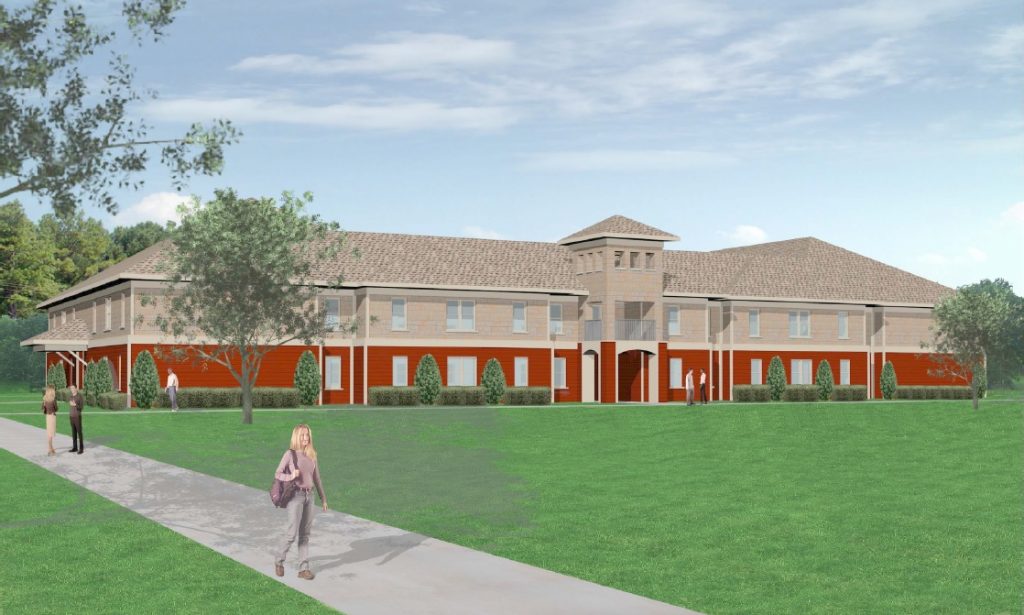 A rendering of the proposed sixth campus lodge, which will be located south of the existing Grove Lodge.

NEW ALBANY, Ind. — The Indiana University Board of Trustees has approved the request for an additional lodge to be built at IU Southeast.

The board voted unanimously to approve the building at the Dec. 1 Board of Trustees meeting. It will become the sixth lodge on the New Albany campus.

Five residence halls opened at IU Southeast in 2008 and have been at 96 percent occupancy or better since fall 2009. About 400 students currently live on campus, but applications for campus housing have outpaced the beds available by at least 130 students the past three years. The new lodge will add 87 new beds located in 24 apartment-style units.

“Since the lodges have opened, we’ve seen increases in retention rates and involvement in campus clubs and organizations among our residential students,” Chancellor Ray Wallace said. “We are very fortunate to be able to offer more on-campus beds in the future to attract even more fabulous IU Southeast students.”

The proposed building will be located south of Grove Lodge and will have the same amenities found in existing lodges, such as a collaborative great room, computer lab, study lounge, laundry facilities and building support spaces.

“We are very excited and grateful that the Trustees have given us the green light to move forward with a new lodge,” Vice Chancellor for Administrative Affairs Dana Wavle said. “The addition of nearly 90 beds to our housing program will increase our ability to meet the high demand for this popular feature of campus life at IU Southeast.”

The estimated completion date is July 2018 pending approvals from the Governor’s Office, the Indiana Commission of Higher Education, the State Budget Committee and the Indiana Finance Authority.