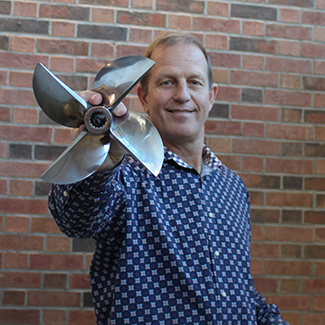 At the drop of the starting flag, the boats of the outboard professional class fired up their engines and blasted off the dock for the second heat. Paul Pittman, known on the circuit as “The Professor,” was in the last position, having qualified fastest (long story). By the time they approached the first turn at 100 miles per hour in a blur of rooster tails and rainbows, he had powered up to second place. The turn was a tight left-hand hairpin. Pittman’s neck muscles strained against four G’s of centrifugal force as he took his line into the turn, cutting sharp enough to leave a lane for other boats but keeping enough speed to slingshot out into the back straightaway in pursuit of the lead boat. The #11 boat on the inside, running third off Pittman’s left elbow, entered the corner too fast. Unable to cut in sharply enough, he lost control and slid out, crashing into Pittman’s boat. The impact against the steering bar spun Pittman’s wheel so hard that it dislocated his thumb and yanked his boat sharply to the left—right into the path of the other 18 boats shooting for the same turn. Somehow they managed to avoid him. Meanwhile #11 fought for control, then flipped up and over the top of Pittman, landing upside down on the water in a spectacular explosion of spray.

“Each turn is an opportunity to do better, or worse,” Pittman said. “There isn’t always one single right answer, just the best choice for that time and situation.”

The driver of #11 misjudged the laws of physics and made the wrong choice of speed for that situation. With his steering bar nimbly repaired by his crew, Pittman shoved his dislocated thumb back into place, won the restart of that heat, and went on to win the World Championship race the following week and be inducted into the boat racing Hall of Champions.

As professor of operations management at IU Southeast, Pittman returned to campus in the fall to teach courses in operations and supply chain management including graduate courses in decision making.

Focus on the human component

Decision-making looms large in Pittman’s academic innovation: the design of examination questions to maximize the informational value of assessment, and to help students make it through that first turn without wiping out, be it in their coursework or in their job.

To take the metaphor one step further, Pittman’s field of supply chain management is itself a vast matrix of decisions waiting to be made. The success of virtually all players in the global economy depends on the timely and strategically thought-out movement of goods and services. While automation tends to shape the popular perception of the processes, it is human decision-making that makes supply chains happen.

For over two decades, Pittman has been helping IU Southeast business students prepare to make those decisions. His commitment to teaching, research and service to both campus and profession have been recognized with five IU Trustees Teaching Awards, three Faculty Excellence Awards, a student mentorship award from APICS (the professional organization of supply chain professionals worldwide), induction into FACET and the only IU system-wide Frederic Bachman Lieber Memorial Award ever bestowed upon a representative of IU Southeast, among many others.

Pittman’s involvement in APICS is tightly interwoven with his teaching, his testing and his impact on student success. He began working with the organization in graduate school, and spent over a decade designing the international normed examinations that provide certification for those seeking to enter the industry. He served on three test committees, chaired the entire certification process, and now sits on the APICS board of directors. This year, together with longtime collaborator Brian Atwater, assistant professor of operations and supply chain management, Pittman co-edited the 2016 APICS Dictionary, the official go-to reference for the industry. 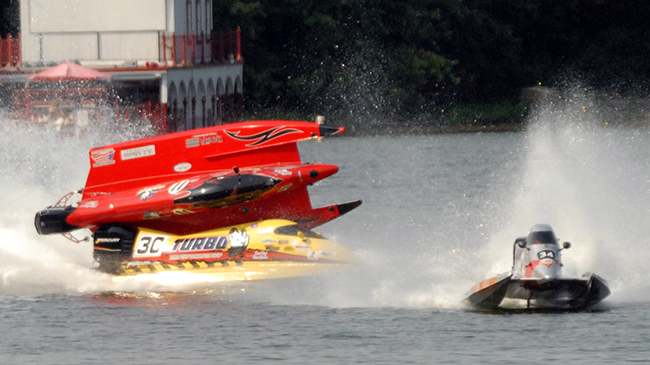 You can’t get more “real world” than supply chain management, a fact that fits Pittman’s personality and shapes his teaching philosophy.

“I’m a ‘why’ guy,” Pittman said. “It means nothing to me if I can’t make a connection with the real world—I have to see its relevance.”

This utilitarian orientation informs his ability to take the humble and often disregarded—even loathed—multiple-choice question and exploit its full potential to advance students to higher levels of understanding.

Pittman uses the multiple-choice questions not as ends in themselves, but as part of a multi-pronged assessment approach, in particular as a means to confirm a student’s familiarity with foundational definitions and concepts that will be used in more complex conversations as the course proceeds.

“The basic knowledge is the condition to get to the stuff that really matters,” Pittman said. “And that’s the applied and higher thinking.”

In a sense, they are wake-up calls to students, to make sure they have done the reading and can contribute actively and meaningfully to class discussion. This is especially important in the online space, where self-reliance is even more important.

“It’s a quick way to assess, you can compare and contrast, there are statistics on it,” Pittman said. “The multiple choice requires students to spend time with the material, so that when I walk into the classroom, they’ve heard of it.”

Once basic concepts such as “lean” or “theory constraints” are understood, discussions about applications in the real world can take place, moving students toward the “why.”

“That’s higher knowledge, taking two ideas and being able to understand both in order to answer the questions,” Pittman said. “That’s going to separate the people who are really successful in their lives and careers from those who aren’t—understanding the concepts and seeing the advantages or disadvantages of both.”

“Learning how to learn”

On a shelf in Pittman’s office sits a custom-made stainless steel racing propeller, engineered for maximum efficiency in moving a tunnel-hull boat through the water at 100 miles per hour. It converts horsepower into forward motion.

Just as the specialized prop differs from those you’d find on the average recreational outboard, Pittman’s questions are designed to slice into an overwhelming and amorphous sea of information and transform it into a medium of self-propulsion.

Also like the propeller, a lot goes into a test question.

“Writing a really good question is not easy,” Pittman said.

Pittman starts with Benjamin Bloom’s taxonomy of educational objectives, first articulated in the 1956 book of the same name and revised in 2001. Objectives rise through six levels, from knowledge of specifics to the evaluation of the value of materials and methods. Pittman uses multiple-choice in the foundational layers of recall, comprehension and application.

“You start writing a question by asking yourself, ‘What kind of knowledge am I trying to measure?” Pittman said. “Where does it fit in Bloom’s hierarchy? Is it definitional? Applied?” Or am I going to ask something that’s going to require a higher level of knowledge?”

On one level, exam design boils down to the mechanical arrangement of questions (stems) and answers (options), all of which are plausible but only one of which is correct. But for Pittman, it is essential that even the simplest questions be designed with the higher level knowledge in mind. For all their factual detail value, even these questions are teaching moments that should occupy a place in the bigger scheme of the course.

All propellers pump water from front to back, but not all propellers have the same purpose, materials, rake, cup, pitch, and so on. In a global supply chain, mastery of detail is important, but what really matters is the ability to relate those details to a worldwide context of other details and to maximize its impact in advancing a larger strategic plan.

So what makes for a good question?

“It comes back to whether it is assessing something that is truly important for the students to know,” Pittman said. “It’s about the what, but also the how, and the why.”

It is proven that students do forget much of what they have learned. But the trope is misleading. Mountain climbers may not remember every step of an ascent, yet each has played its role in helping them reach the summit.

“I don’t expect people to remember the basic knowledge, but I know they’ll know how to access that information,” Pittman said. “The test is helping them learn how to learn.”

As technology changes the classroom, Pittman sees new possibilities for multiple-choice questions to enliven the teaching and learning experience.

Teaching technology can help instructors sharpen their test-writing skills, for example, by flagging bad questions. Analytics built into the testing applications can indicate whether students who do well overall are consistently tripping over a question that seems to pose no problem for students who do not do as well—the telltale sign of a bad, ie. ineffective question.

Thinking more broadly, Pittman can envisions an exam in which an embedded video clip of an actual or staged situation could form a stem around which a variety of multiple choice questions could be posed. In the same way, a news segment or positioning on a concept that the class has been studying could be used to elicit student reflection, discussion and response. Links could lead to more in-depth contextual information.

Pittman sees such initiatives as a way to bring the decision-making imperative of the multiple-choice question into alignment with the messiness of the real world.

“In business, it isn’t always right or wrong,” Pittman says. “And what’s right today isn’t going to be right two years from now.”

Getting through the first corner of a supply chain career without wiping out requires both a solid knowledge of concepts and a feel for the real world situation. It’s a test, and it’s not easy.

“Learning is hard, as all the things that mean the most in life are hard, but like those things, it’s also the most rewarding,” Pittman said. “That’s how I see as our role as faculty: helping students work through those challenges to feel the reward.”

Up the down escalator

Paul Pittman still races, albeit in a different category that includes enthusiasts ranging in age from nine to 90. While he placed third in Nationals in 2014, his focus since retiring from the circuit in 2007 has been on teaching others: He sponsors a couple of high-performing racers in their twenties and sets up their equipment to race, working also with his own children and young friends who want to learn the sport.

“One thing others really know about me, whether we win or lose, I am always asking, ‘How can we do better?’” Pittman said.

It’s a mindset that keeps him and his students—those in business as well as those in racing–successful. (His daughter set a world speed record in her class in 2015.)

“Learning is like going up the down escalator,” Pittman said. “If we work really hard we can get to the top, if we just keep a steady forward pace we will remain at the same place, if we stand still we will end up at the bottom.”