In their luggage: 42 water purification units from Louisville, Ky.-based nonprofit WaterStep, destined for refugee camps in areas hard hit by the April 16 earthquake.

Now they are back, and ready to tell their stories in a presentation titled, “Experiences from Global Learning and Giving,” on Thurs., Nov. 17 at 2:30–4 p.m. and again at 6–7:30 p.m. on the third floor of the IU Southeast Library.

Representatives from WaterStep will bring samples of their water purification equipment, and Sister Cities of Louisville will address the significance of people-to-people diplomacy. 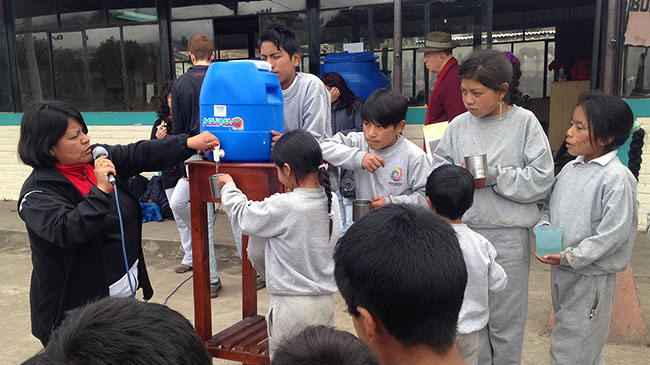 Children from the Bolivar Chiriboga School of San Gerardo, Ecuador, assisted by the principal, Ximena Cardoso, receive their first cups of clean water for a school toast. Photo courtesy of Dr. Magdalena Herdoiza-Estevez.

The April 16 earthquake registered 7.8 on the Richter scale, leveled coastal villages and displaced more than 26,000 people.

IU Southeast education faculty Dr. Magdalena Herdoiza-Estevez, a native of Ecuador and director of the summer program, helped to coordinate an informal “task force” of Louisville-area organizations to assist those in need through fundraising, donations of relief supplies and more.

The joint efforts between the IU Southeast Ecuador Study Abroad program, WaterStep, Sister Cities of Louisville and the Ecuadorian community of Kentuckiana were able to provide the 42 water purifiers, as well as the training and education to use them. Each chlorinator can produce 10,000 gallons of clean water per day.

Ambassadors with a purpose

Working with on-site representatives of the German development organization, GEZ, the Louisville team worked out a plan to get the purifiers to the camps where the evacuees were housed. This is where the study abroad participants came in: they would carry them to Quito and deliver them to the responsible aid workers.

“When we learned that we would be able to take water purifiers to Ecuador, our preparation and purpose elevated to a new level,” said graduate student MaryAnn Combs. “Within a couple of hours of landing in Quito, we were able to unpack our suitcases and repack the equipment so it could be redistributed to the relieve sites. We were able to expedite the process much faster than if the equipment had been shipped with a commercial carrier.”

“This trip was another chapter in a book that started years ago,” Combs said.

That book is the relationship between IU Southeast and the village of San Gerardo in the highlands of Ecuador, home to about 500 Quichua people, living in poverty. For the past 15 years, the village has been a focus of the service learning component of the study abroad program. In that time, the partnership launched by Herdoiza-Estevez, has become part of the fabric of village life, and a source of hope for the inhabitants.

Each summer the students help to teach in the village school, but they also work together on a larger project like tree-planting, mural-painting, community story-writing, computer donation and set up, and more. They also conduct classes and workshops. This year they donated and installed a water purification system obtained from WaterStep through donations. 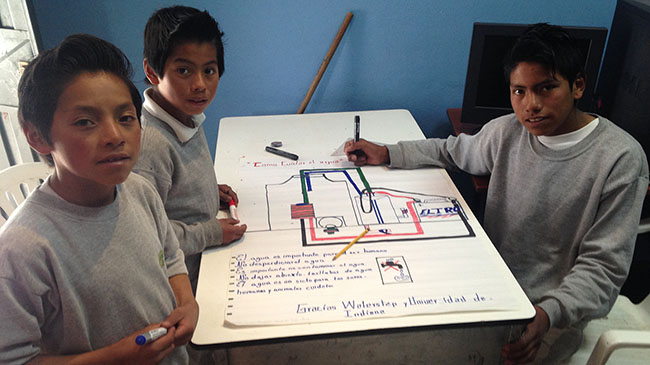 Boys from the village of San Gerardo create a diagram of the new water purification system and express their gratitude to WaterStep and IU Southeast. Photo courtesy of Dr. Magdalena Herdoiza-Estevez.

With the participation of the community, they also installed restroom facilities for 20 pre-K children and four showers for 120 elementary education students. In a village where homes typically lack washing facilities and even hot water, this is a significant improvement in quality of life that has knock-on effects for education.

“The impact of clean water in the San Gerardo community cannot be overstated,” Combs said. “Mothers can spend less time preparing meals, and children will be healthier and attend school more regularly.”

Another priority for this year’s visitors from IU Southeast was to provide 24 toddler beds for the children in daycare, ranging from six months to three years old. Until now, the children had slept together on a few old mattresses on the floor.

Kelli Dehr was a teacher assistant on the Ecuador program this year. She is an IU Southeast alumna and local English learner educator. The 2016 trip marked the eighth time since 2007 that she had traveled to Ecuador with the program.

For Dehr, the installation of the water purifier and the cribs made this year’s trip unique and powerful.

“Being able to change the long-term lives of a community I have grown to love was a very rewarding and humbling experience,” Dehr said.

Reflecting on the benefits of the relationship on both partners, Dehr sees the students as equally enriched by the experience, both educationally and personally.

“Projects that seem small to us have had a life-changing impact for the people of San Gerardo,” Dehr said. “But a much larger impact has returned to the U.S. in spirit and educational practice through the students of the program and educators in our community.”