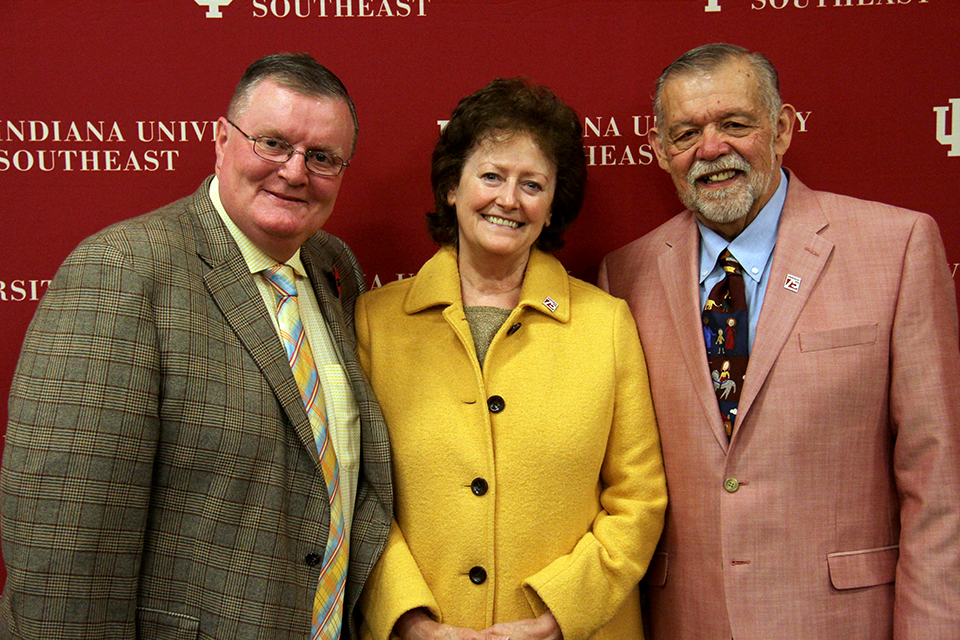 Chancellor Ray Wallace (left) with Sheila and Jerry Wheat, both IU Southeast alumni, who have announced a $1 million gift to fund their scholarship for School of Business students.

The gift will provide additional funding to the Dr. Jerry E. and Sheila R. Wheat Scholarship for IU Southeast School of Business students.

In the announcement of their gift, Jerry Wheat ’64 spoke passionately about his desire to minimize the amount of debt students incur so they can be productive members of society when they graduate. Wheat received financial aid of his own through the G.I. Bill and a scholarship from IU Bloomington, and he has now made it his mission to pay those opportunities forward.

“The inspiration behind Jerry Wheat’s gift speaks to the very heart of philanthropy,” IU Southeast Chancellor Ray Wallace said. “Here is a man who, as a student, benefitted from the generosity of others, and now he has resolved to reach back and offer that same assistance to generations of IU Southeast students to come. Givers like Jerry and Sheila Wheat make it possible to prepare our students to be productive citizens in today’s global marketplace.”

Wheat was a professor of business administration at IU Southeast for 29 years. He was an Air Force veteran and the dean at the School of Business for a decade before retiring in 2006. As vice chair, treasurer and board member of the World Affairs Council of Kentucky and Southern Indiana, Jerry Wheat has pursued “citizen diplomacy” in providing foreign business leaders with examples of American best practices. He continues to contribute to the international business field through consultancy and publications, with concentrations in ethics and transition economies.

Sheila Wheat B.G.S. ’81 enjoyed a successful career working in advertising agencies in Louisville. She is now retired and enjoys gardening at the Wheats’ home in Corydon.

This gift counts toward the $2.5 billion campaign, For All: The Indiana University Bicentennial Campaign. The Bicentennial Campaign is taking place on all IU-administered campuses including IU Bloomington, Indiana University–Purdue University Indianapolis, IU East, IU Kokomo, IU Northwest, IU South Bend, and IU Southeast. The campaign will conclude in December 2019 to coincide with IU’s bicentennial year celebration in 2020. To learn more about the campaign, its impact, and how to participate, please visit forall.iu.edu.