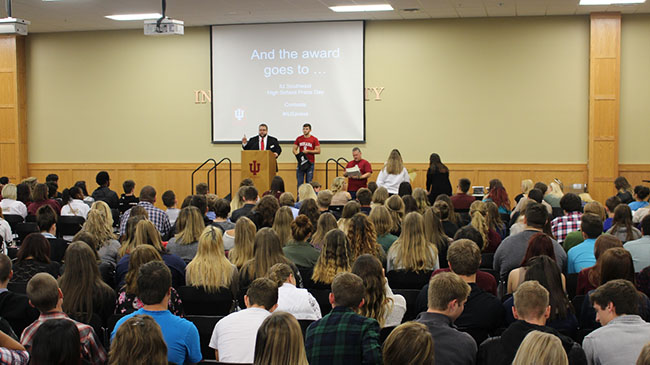 This truth was vividly on display on Oct. 28 at the annual IU Southeast High School Press Day.

The event brought more than 400 high school students from 14 different schools together with professional journalists from seven different media organizations and specialist faculty members for a day of workshops designed to sharpen students’ journalistic chops.

The keynote speaker was Thomas French, a Pulitzer prize-winning reporter and author who teaches narrative journalism, story mechanics, depth sports reporting and related subjects at Indiana University in Bloomington. French also led a workshop on the power of interviewing. 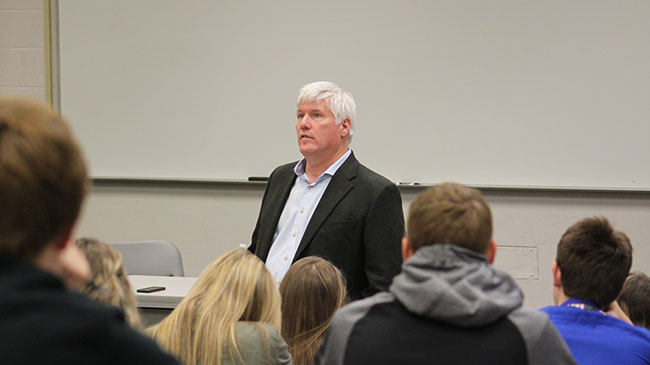 “We want students to recognize that journalism is just as important today, if not more so, than it ever has been, and at the core of good journalism is an understanding and appreciation for the lived experiences of others,” Maksl said.

Over the past several years, Maksl and colleagues Ron Allman, professor of journalism, and more recently Jane Dailey, visiting assistant professor of public relations, have worked to keep the event current, so that students are exposed to the most recent trends in the field, and gain a true insider’s view of what the future may hold. The workshops were offered twice, enabling students to benefit from a range of expertise.

Among this year’s innovative and challenging workshops:

Jane Dailey of IU Southeast on careers in public relations

William DeShazer of Louisville Business First on the power of photojournalism.

For instructors such as Sarah Craft, who teaches English, social studies and journalism at William Borden High School in Borden, Ind., the Press Day is a chance for students to gain leading-edge insights into the changing world of media.

“For my students, the value lies in the ability to interact with students from schools much larger than ours, and have takeaways that are immediately applicable,” Craft said.

Craft has attended five Press Days, and has seen significant changes in that time..

“We’re starting to switch to an online format for our student newspaper, and integrating more social media, pulling more photos from students, encouraging students to submit photos online—it’s very different than it was just five years ago,” Craft said.

One person who has seen the change up close is Leon Ritter, retired television journalist from WHAS-11 who led a workshop in the basics of video storytelling.

“It’s a whole new world,” Ritter said. “But it’s important for young journalists to know that the skills that came from television are still necessary, even though the way the information is presented is continuing to change.”

For Maskl, this blending of the foundations of journalistic excellence with emerging technologies and techniques is one of the chief attractions of Press Day, enabling students not only to acquire marketable skills, but to join a broader conversation about journalism with local leaders in the field.

“We have a tremendous media community in Southern Indiana and Louisville, so exposing high school students to this is useful in helping them be more media-literate and more enthusiastic about the role journalism plays in our society,” Maksl said. “For IU Southeast, it serves as a way for us to serve the community and it helps expose potential future Grenadiers to the amazing things our campus has to offer.”