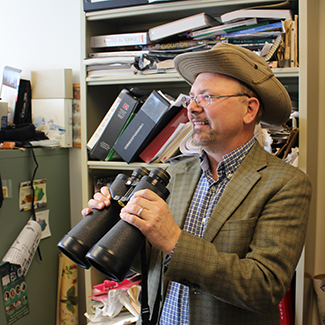 (NEW ALBANY, Ind.)—Back in the spring of 1996, a post-doctoral candidate in plant development named Doug Darnowski found himself marooned in a departure lounge at Chicago’s O’Hare International Airport, waiting for a thunderstorm to pass so that he could continue his journey to an interview for a post-doc job at the University of Illinois at Champaign-Urbana. Rather than stare at the monitor in the vain hope of a boarding announcement, he decided to while away the layover compiling a list—annotated, of course–of the professors who had had the biggest impact on his other journey, the academic one.

With a bachelor’s from Yale and a Ph.D. from Cornell under his belt, Darnowski had studied with renowned researchers and benefitted from elite facilities. His list was filled with recognizable names, but at the top was the name of a general biology visiting lecturer and plant biology lab instructor in Darnowski’s freshman year: David Taylor.

By letting the students design their own tissue culture experiments, Taylor had given Darnowski and the other freshmen a taste of scientific inquiry and, more importantly, challenged them to be scientists themselves by giving them the tools and the freedom to hypothesize, fail, self-assess, and succeed.

“Good grief, we even got to use a pressure bomb to measure water potential in stems—Cornell didn’t give us that as grad students,” Darnowski said.

Today, twenty years later, Darnowski is associate professor of biology at IU Southeast, teaching alongside the man whose name topped that list, and applying the same teaching methods he first experienced as an undergraduate.

David Taylor is professor of biology at IU Southeast, focusing on evolutionary biology with a special research concentration in the area of paleobotany, the study of prehistoric plant life, a field in which he has published extensively and enjoys an international reputation.

He is also a current co-leader of the IU Southeast field biology program, which over the past 20 years has taken students to 20 countries on four continents and two oceanic areas, including South Africa, Brazil, Australia, New Caledonia, to name just the most geographically disparate.

But his true joy and ultimate fulfillment derive from teaching, evidenced by a Distinguished Teaching Award, a Trustees Teaching Award and most recently an International Education Award for his exceptional contributions to international teaching, research, service and engagement.

Since arriving at IU Southeast in 1991, Taylor has applied—both opportunistically and systematically—innovative active learning methods in biology.

About five years ago he began using project based learning (PBL). This model was pioneered in the 1950s in medicine but has since found application in every other discipline.

In contrast to a traditional classroom in which lecturers blast students with copious amounts of base knowledge before subjecting them to batteries of tests in which the students demonstrate their rote recall of the information before forgetting 90% of it (according to studies), active and project based learning methods challenge students to become problem solvers by presenting them with interesting real-life scenarios and providing them with a range of tools with which to address them. The result: increased self-direction, deeper understanding, better retention and a higher degree of independent thinking.

“Most lab science classes are ‘cookbook,’ with preset actions leading to a preset result,” Taylor said. “Mine are more like: Here is some background, here’s what we’re going to do, make a hypothesis, tell us what you think you’re going to get out of this.”

Instead of putting students on a tightrope with no net and telling them they’d better not fall, Taylor gives them the keys to the car and tells them to be back . . . whenever.

“There’s no right way,” Taylor tells his students. “Some of you will do it this way, some of you may do it that way. Does your outcome support your hypothesis? If it does, that’s great. If it doesn’t, you’re still not wrong. Because you’re still thinking like a scientist.”

Essential to the practice is passion, which is where the “active” part of active learning comes in. Taylor makes sure to identify project areas that matter to the students so they will stay engaged and feel inspired to make hypotheses and pursue validation.

For example, Taylor’s unit on the origins and evolutionary implications of domestication involved students studying the communicative interactions between themselves and their dogs, since the personal relationship was not only fun but made the work relevant. Earlier this year, in order to determine whether a pregnant student would be in danger when traveling to Vanuatu, where the zika virus had been identified, Taylor’s evolution class devised a series of DNA data analyses whose reassuring results dovetailed with the eventual official all-clear and enabled their colleague to join the trip without fear that her child would be born with microcephaly. In another class, students had to apply their knowledge on a take-home synthesis-level essay exam on the relationship between genetics and environmental factors to determine the best way to produce a Triple Crown-winner. Spoiler: the data proved conclusively that 90% of a given horse’s advantage is down to environmental factors such as training, not on breeding.

In the course of these and other exercises, students access and use resources and information they haven’t been formally taught or made aware of, but are essential to solving the problem at hand. This “accidental learning” is an essential part of the exercise, according to Taylor.

“In active learning, as you learn something, you keep using it and sampling it in order to learn other stuff, and don’t even realize you’ve reinforced the core knowledge,” Taylor said.

In Taylor’s classes, students gain knowledge in order to use it to solve problems, not just to make a grade. At the end of the journey, they emerge with skills for lifelong learning. 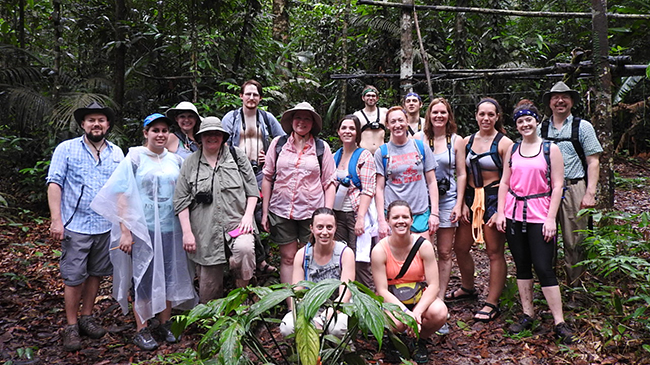 “I do and I understand”

Taylor has described his teaching philosophy with reference to a quote from the annals of education:  “I hear and I forget, I see and I remember, I do and I understand.”

This philosophy finds expression in the so-called flipped classroom, which he introduced to IU Southeast.

In this unstructured-seeming model, students are responsible for their own learning and assessment. It might seem like a holiday for the teacher, but in fact it’s a designed structure that has been shown to increase retention and understanding by 40-50%. In his flipped classes, Taylor acts as a facilitator and collaborator rather than a lecturer. Students learn in teams or groups, and again the focus is a problem or project from the real world with goals mirroring Bloom’s taxonomy of cognition: to encourage critical and creative processes, to apply, analyze and synthesize answers to—in this case—biological problems.

While taking a less visible role in the learning process, Taylor actually is more active than many a traditional teacher. There are no canned lectures to recycle, but up to date preparatory readings on base need-to-know concepts must be assigned well in advance, and formative quizzes to ascertain prior knowledge must be prepared, so that lesson time can be spent addressing what is truly not known. Students assess themselves and one another, so that the group structure enjoys full participation; the accuracy of these self-assessments drives the class forward.

Finally, there is the all-important freedom to fail. If science has a sports analogue, it may well be baseball, where failure is the norm and perfection an elusive ideal, yet in which devotion to the game itself, through attentiveness to minute details, is rewarded. Science is about the details, and for Taylor that means the process of critical reading and thinking like a scientist means subjecting everything, including the tomes of the sages in the field, to withering scrutiny.

“I want our students to come out not only able to read scientific literature, but also to question it,” Taylor said. “Beyond consumers of knowledge, they have to bring critical analysis skills to that knowledge.”

To reward critical and creative thought, and the many forms it can take, Taylor has introduced a grade beyond the “A.” It is called “distinguished.”

“’Distinguished’ allows for that extra evidence of learning where you drew in something that makes your ‘A’ answer an even better answer,” Taylor said.

Students are motivated to strive for this distinction, which demonstrates the capacity to function not just as a student, but as an independent scholar.

Taylor’s innovations are applications of the PBL canon, reinforced with best practices gleaned at conferences and continually augmented through rigorous self-evaluation. But the impulse to adopt them as the core of his teaching philosophy has deeper, and more personal roots.

Both of Taylor’s parents were educators, which certainly imbued him with a love of learning and a consciousness of the wider world. It also gave him a certain way of seeing life as a dynamic fabric interweaving ideas and research with the commonplace occurrences of everyday experience. From here it’s not a big leap to a teaching philosophy that integrates biological base concepts with dogs, horse racing and vaccinations.

The initial impetus to apply the active teaching methodology was supplied by Taylor’s first wife, now deceased, also a scholar whose focus was in gifted and talented education. Through the years and days of conversations and shared experiences, Taylor came to see all higher education through the gifted and talented lens, and to adopt many of its precepts and practices for his own lectures and labs.

Taylor’s extension into PBL reveals the inspiration of his current wife, who has used it in the high school classroom for about five years.

“The design where the students buy into real world problems and share the results of the project outside of the classroom intrigues me,” Taylor said.

Finding what you don’t know

Taylor’s impact has been immense. The active learning model has been the basis of the biology curriculum since 2000. As a professor, advisor and mentor of undergraduate and graduate students, Taylor has helped to directly facilitate the journey of many dozens of students, while many others have praised his courses over decades of evaluations as the most formative of their college careers.

“Research can be the key event in students’ educational career and can influence their self-concept and ultimately their career decisions,” Taylor has written.

Statistics on student outcomes, collected several years ago for the Distinguished Teaching Award application, suggest that Taylor’s approach to research has inspired students to follow science as a career path. Nationally, 37% of graduates were shown to go on to either a professional or graduate school at that time, while 70% of Taylor’s students had taken this path.

For Taylor, success in teaching and in learning begins with humility, collaboration and the passion for solutions, all of which come together in the active learning model.

“My job is not to teach you, but to find out what you don’t know, and help you learn it,” Taylor said.