The 14 students bold and curious enough to have embarked on this journey will spend two weeks visiting purportedly “haunted” destinations in England and Scotland, from the Tower of London with its legacy of torture and royal executions to Edinburgh Castle, steeped in stories of phantom pipers, headless drummers and the ghosts of dogs wandering the canine cemetery. 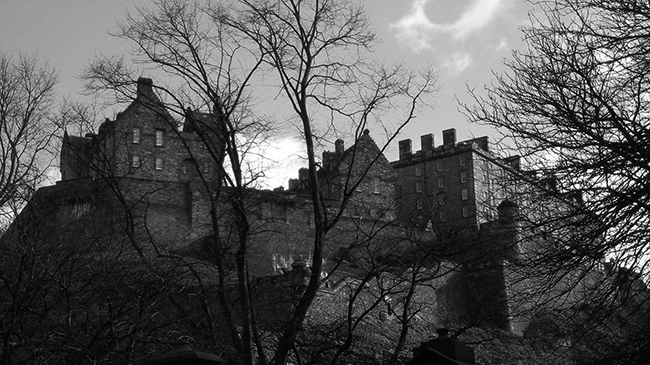 A visit to Edinburgh Castle, reputedly one of the most haunted locales in Europe, is a highlight of the course.

Other stops along the way include the British Library’s Gothic Collection, St. Paul’s Cathedral and the house of Sir Arthur Conan Doyle, creator of Sherlock Holmes, among others.

The course facilitates critical thought, analysis and “out of the box thinking,” according to Dr. Lucinda Woodward, assistant professor of psychology and co-director of International Programs at IU Southeast, who will teach the course alongside Dr. Brian Laythe, a social psychologist with expertise in the study of the psychology of religion and philosophy who has published numerous studies on paranormal belief systems and anomalous phenomena.

How far out of the box? Extrasensory perception, psychokinesis, psychic readings—it’s all fair game.

Yet for all the chains clanking in the attic, the course is no mere haunted house tour.

The goals are rigorous: to use both the history of psychology with regards to paranormal phenomena, as well as a balanced examination of the criticism and successes of parapsychology, to facilitate a better knowledge of critical thinking and analysis in research methods, especially the challenges of measuring intangible constructs. It aims also to deepen students’ awareness of psychological concepts of confirmation bias, belief perseverance, self-serving bias, contagion effects and psychosomatic influence.

In other words, the course uses persistent phenomena that defy reasoned explanation to examine the workings of the human mind.

“The challenge of analyzing parapsychology will facilitate students’ ability to evaluate evidence in the context of cultural expectancies such as the placebo effect,” Woodward said. This includes setting up electronic field research equipment such as infrared cameras, electronic thermometers and vacuum-sealed voice recorders in purportedly “haunted” locations to observe, document and analyze anomalous phenomena in a systematic, evaluative manner. Prototype software will be used to analyze audio contents and account for environmental contamination and effects such as pareidolia.

Lending academic input will be local experts at institutions such as the Society for Psychical Research, the University of Northampton with its graduate program oriented towards parapsychology, the Koestler Parapsychology Unit of the University of Edinburgh, and the Institute for the Study of Religious and Anomalous Experience.

In addition to a participating in an active investigation and completing a research paper, students will master readings in early and current research in parapsychology and its critiques and defenses, as well as introspective reflections on how the material and experience have challenged their own belief systems. Far from the stuff of fog-shrouded London alleyways, these skills can be useful when trying to unlock more common mysteries, like finding the right job, something that can often appear to demand supernatural talents.

“In an economic market where well-paying jobs are becoming more and more difficult to obtain, it is the students who demonstrate analytical ability and problem-solving who are more likely to obtain and retain their positions,” Woodward said.

While the current trip is full, Woodward plans to repeat the course in the near future, focusing on locations closer to home that hold acute paranormal interest, such as New Orleans.