NEW ALBANY, Ind. — Judge Carlton and Sue Sanders, IU Southeast alumni and longtime supporters of the university, received the Sagamore of the Wabash for their service to the state.

Chancellor Ray Wallace presented the award to the Sanders following his annual State of the Campus address on Oct. 14.

“This is a true power couple,” Wallace said. “Much of what you see on campus today is thanks to their generosity and continuous support.”

The term “sagamore” was used by early Native Americans in the northeastern U.S. to describe someone among the tribe to whom the chief would look for wisdom, guidance and advice.

“Similarly, the Sagamore of the Wabash is one of Indiana’s highest honors and is given to those Hoosiers who have rendered distinguished service to the state and contributed greatly to our Hoosier Heritage,” Wallace said.

Most recently, the Sanders’ generosity has enabled IU Southeast to create the Sanders Professional Sales Center in the School of Business.

The Sanders also give back to the Southern Indiana community through involvement in the Community Foundation of Southern Indiana, LifeSpring Mental Health, Metro United Way Harrison County, the Salvation Army and other organizations. 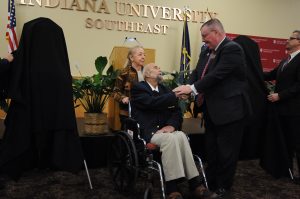 Chancellor Ray Wallace, right, shakes the hands of Judge Carlton and Sue Sanders prior to unveiling the Sagamore of the Wabash awards. 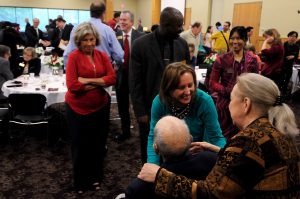 IU Southeast faculty and staff congratulate the Sanders on their award. 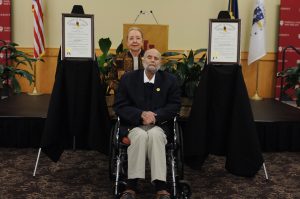 Judge Carlton and Sue Sanders next to their Sagamore of the Wabash awards. 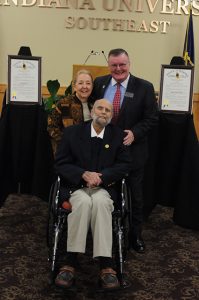