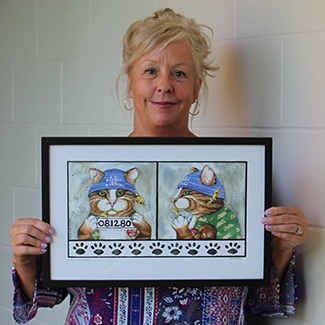 (NEW ALBANY, Ind.)—A birthday cake from Kroger sits on the high kitchen table in an apartment in Orchard Lodge, with “Happy 21st Hannah” written in pink frosting. Around the table, two of the three tall matching chairs have been knocked over. A roll of duct tape dangles from one of the legs. In the adjoining living room, papers are strewn across the couch, and several pieces of furniture are upturned. Down the hall, a TV remote control, a curling iron, a hand towel and a brochure from a health fair lie jumbled on the floor. To the left, the bathroom door is open, the light is on. A young woman sprawls lifeless on the linoleum, her contorted upper body tightly wrapped in clear six-mil plastic sheeting. A few inches away from her upturned face, her glasses lean against the baseboard. Cosmetics and sundries spilled from her fallen purse litter the room. To the right, a bedroom door is ajar. The bed is roughly unmade, its sheets and duvet slumped to the ground. Storage bins, pulled from underneath, sit rifled and partly open. On the floor lies another young woman, face down, one socked foot chained to a bedpost, draped in a bloody sheet, holding a catheter in one hand next to an empty bottle of Windex. The handle of a kitchen knife rises from the middle of her back. The words, “Change the World!” leap from a collage on the wall.

Welcome to the classroom of Dr. Bernadette Jessie, associate professor of criminology and criminal justice at IU Southeast.

Jessie teaches forensics, the scientific methodology involved in solving crimes. There are two complementary strands of the field: forensic science focuses on the collection and analysis of material evidence, while forensic psychology probes the motivational profile of perpetrators as well as victims. Jessie teaches both.

The crime scene in Orchard Lodge is Jessie’s innovation. It forms part of both classes, giving students a hands-on simulation that tests their powers of observation, analytical rigor and emotional fortitude.

Jessie also teaches introductory courses in psychology to incoming freshmen, as well as senior seminar. Courses in corrections and international comparative criminal justice round out her work roster.

The range of Jessie’s teaching responsibilities offers clues to her background: She studied psychology as an undergraduate, as well as forensic psychology and criminal justice with concentrations in social deviance. She spent a dozen years working with sex offender populations, among others, in jails and treatment centers before considering a return to the academic world, ultimately obtaining a Ph.D. in psychology.

Like her background, Jessie’s pedagogical approach is a holistic synthesis of critical criminology and experiential education, or as Jessie says, paraphrasing the philosopher and educator John Dewey, learning and living the material.

Jessie’s philosophy finds expression in the creation of the crime scenes, an innovation has evolved over a period of several years.

In the beginning, to teach techniques of evidence analysis in a hands-on way, she created her own version of a crime lab in the classroom.

“I used black garbage bags to protect the walls and floor, and when the students came in, I was like, ‘Let’s play!’” Jessie said.

The “lab” featured Karo syrup blood splatters, dental impressions in Styrofoam plates, shoe imprints in Playdoh and faux vomit. Positive feedback inspired her to stage the first true crime scene, created in the faculty lounge in Crestview Hall. There were obvious constraints, to protect the institutional infrastructure and generally not trash the place.

“It was hokey,” Jessie said. “Because we had to use butcher paper for the footprints and poster board for the blood spatters and an empty baby stroller instead of a victim.”

Trial and error led her to move the exercise outdoors, and to a higher level of realism, with bloody gloves hidden in bushes and personal friends playing the participants in a study date gone horribly wrong. Last year’s iteration was the most realistic yet, casting Jessie’s husband and daughter in the roles of shooting victims, complete with fake bullet holes repurposed from a zombie apocalypse costume and shell casings of differing calibers gathered from a local shooting range. 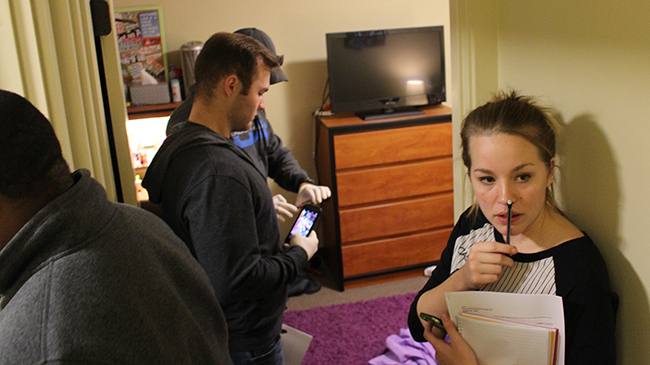 There is no template for the construction of these tableaux. According to Jessie, they are a combination of what the literature suggests about the behavioral “trademarks” of certain types of offenders and elements of her own imagination.

“It’s all very purposeful, to get the students to connect what they’ve read and studied to its fairly real application in the real world,” Jessie said. “Behavioral analysis doesn’t tell the investigator who the offender is, but can help by providing key characteristics that may help narrow down suspect lists, develop apprehension strategies and, once they have a suspect, knowing something about the pathology of an offender can help investigators come up with interview and interrogation strategies tailored to that type of offender.”

Jessie’s crime scenes are meticulous stagings that tell a story, or at least assemble a multitude of props in a way that would permit the unfolding of many possible stories, based on the research. Chaos yields to order. Situations can be inferred from the constellation of rumpled sofa cushions and tilted picture frames. Scenarios suggested by scribbles on a notepad or a half-eaten container of yogurt.

Watching the students wrap their heads around the scene, it becomes clear that Jessie’s task is as much art as it is science. Everyday things like toothpaste or cotton swabs are infused with meaning. The line between relevant and irrelevant objects is blurred. The apartment rapidly fills with question marks. Which of these props were participants in the crime, and which were bystanders? What personality traits can be inferred from the degree of disarray in the apartment? What does the chained foot of one of the victims say about the likely type of perpetrator involved? On the bathroom floor, a single tube of lipstick lies opened in front of a mirror propped against the wall—why?

The real world—minus the swearing

Jessie’s primary stated objective is to debunk the myth of crime and criminal justice as they are presented in popular culture, particularly on TV, and deliver authentic courses to people who need to be prepared, in terms of skills and temperament, to handle a demanding real world job.

She begins by dousing them with cold water.

“I tell students, ‘You’re not going to be that hot-shot profiler with the FBI, and if you are, you’re going to start in Ohio doing background checks for eight years, and then maybe work your way up,’” she said

She then gets down to the serious and essential business of separating fact from fiction.

“I tell my students that what you get in the classroom is what you see in the real world,” Jessie said. “Minus the swearing.” 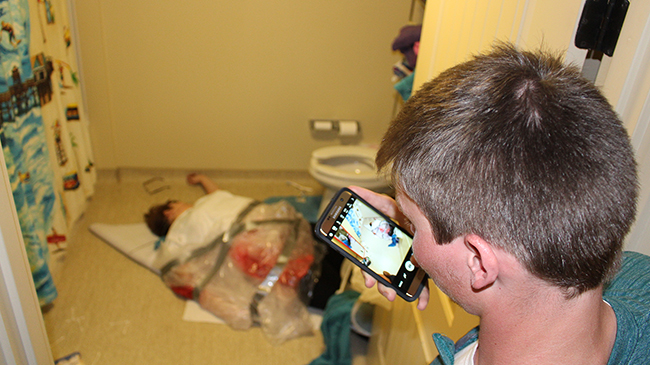 Students gather evidence at a crime scene construction that is both academically and emotionally challenging.

The realism of the crime scenes and the meticulous work required to decode them and explain what happened, delivers a taste of the real world that is as forthright as can be expected from a college course. Students collect evidence, complete a crime scene sketch at the scene, then a final sketch to scale with a legend, and ultimately postulate a theory on what happened. They are not graded on whether their theory is right or wrong, but on the process of how they arrived at their conclusion based on autopsy or toxicology reports, blood spatter and other evidence.

Jessie understands the powerful effect that all this realism, and the basic material of the subject itself, can have on the students. In a sense, an accurate crime scene would number the forensic team among the victims. These, too are sensitive individuals whose contact with criminal violence is an event that they must be emotionally and mentally prepared to deal with.

To help students cope, Jessie seeks to foster an environment that really educates criminal justice students about what they need to know, while respecting the university’s role as a safe haven.

“Race and sexuality and gender and poverty and social class and the gap between the haves and have-nots – it can be very polarizing material,” Jessie said. “But here in class, it’s an open book, a chance to have a safe environment where you can talk about really hard stuff.”

One way for Jessie to create that haven is to assign a “reaction brief” that gives students a chance to reflect on the material and vent on their experience of the class. The journal-style exercise can become an important release valve for pent up fear, anger, memories and associations.

Sugar-coating the subject matter does not serve them. At the same time, she stops short of forcing students to confront realities that, for any reason, may be too uncomfortable for them.

Based on conversations with colleague Dr. Sarah Walsh, who deals with computer crime, Dr. Robin Morgan, director of the Institute for Learning and Teaching Excellence (ILTE) and Darlene Young, director of the Office of Equity and Diversity, Jessie has built a caveat into the syllabus that allows students to opt out of assignments that hit too close to the bone.

“You have to take care of yourself,” Jessie said.

When it comes to self-protection, levity is an important and time-honored tool of the trade, and Jessie helps the students cultivate it.

“We spend a great deal of time on sex offenders and abuse and domestic violence and poverty and homelessness,” Jessie said. “If you can’t laugh, you’d have to cry.”

This year’s crime scene in Orchard Lodge was especially rich in detail, including real student actors in an actual dwelling. Since the class is forensic psychology, the students who took notes and cell-phone photos were interested less in epithelials lodged under victims’ fingernails and more in the personality profile that could be inferred from the acts suggested by the scene.

In the future, Jessie would like to find other ways to make criminal justice relevant and accessible to students seeking more than a job in policing. That may mean field trips, inviting crime scene technicians and medical examiners to speak to her classes, or focusing on career avenues such as probation/parole officer for youth offenders or legal aid. Most of all, she would like to create courses on special populations in corrections as well as a forensics track in criminology and criminal justice, complete with a working forensics lab.

In the meantime, Jessie expects to continue fine-tuning her approach based on what she learns from the students. Their experiences, impressions and stories bring a level of reality to her courses that can’t be found in books, and that Jessie knows how to channel for the benefit of the entire class.

“I don’t want to be their only source of information,” Jessie said.