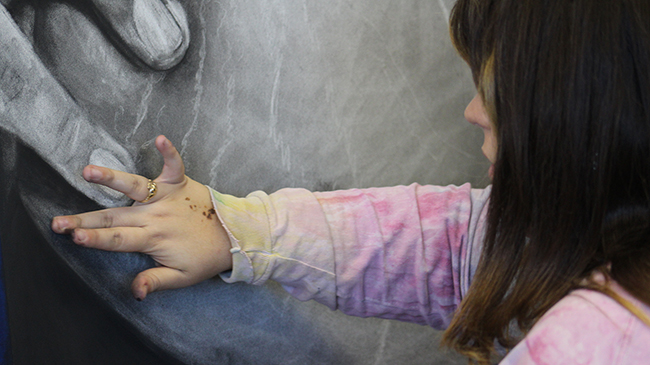 Fine arts student Jessie Martin explores the nuances of charcoal to represent bodily changes over time, for the exhibit, “Embedded and Embodied.”

(NEW ALBANY, Ind.)—Three interrelated events spanning academic disciplines will explore issues of body experience, body images and body shaming as part of the Mental Health and Wellness Seminar series produced by Personal Counseling Services with the support of The Common Experience and the participation of the fine arts department.

“Embedded and Embodied: Student Artists Draw on Their Experience of Being Women,” an exhibition of works by members of the upper division drawing class of fine arts faculty Emily Sheehan, will be on display in the IU Southeast Library. A reception to officially launch the exhibition, featuring introductions by the artists, will take place on Wed., Nov. 2 from 4:30 to 5:30 p.m. on the Third Floor of the Library.

The film, “Killing Us Softly: Advertising’s Image of Women,” by Joyce Kilbourne, will be shown on Tues., Nov. 1 at 4 p.m. in the University Center North, Room 127. First released in 1979, the influential film uses over 160 ads and commercials to critique advertising’s image of women. By fostering creative and productive dialogue, Kilbourne invites viewers to look at familiar images in a new way, that moves and empowers them to take action.

At the heart of this conversation is the impact of body image—primarily that of women—on culture and the individual.

“Considering the structural inequalities many women are still facing—the wage gap, violence, harassment, access to healthcare and, in other parts of the world, exclusion from education, political decision-making and more—the normative pressure to look a certain way might not be as existential, but it is part of this same context,” Hoelger said.

Current trends show that the pressure to conform to traditional norms of appearance—most omnipresently articulated in advertising for cosmetics that sells the idea that all women are somehow deficient until they purchase this or that “beauty” product—is taking a damaging turn among younger women and girls in the wired age.

“With the emergence of social media, bullying has gotten easier,” Hoelger said. “Particularly young girls and women are often subjected to assessments/measurements of their appearance and mocked if they don’t correspond to an impossible beauty standard. Such negativity inflicts a lot of stress and insecurity.”

That stress and insecurity can result in depression, anorexia, bulimia, and even more tragic consequences.

“Our bodies are meant to change.”

Such complex experiences are made vividly visual in the student works making up “Embedded and Embodied,” which serves as the backdrop for the panel discussion.

Sheehan’s class this term turned out to consist entirely of women. She took this happenstance as a chance to generate a dialogue about the experience of being women in contemporary society.

“As a class composed completely of female artists, we have the unique opportunity to confront this topic as a component of our individual identities, one that we experience intimately, respond to personally and share as commonality,” Sheehan said.

The students were asked to read and discuss research relating to the portrayal of women in art, advertising and the media, and then to cultivate visual approaches to addressing subjects such as gender, female body experience, body constructs, sexuality, women’s health, women’s rights and more. 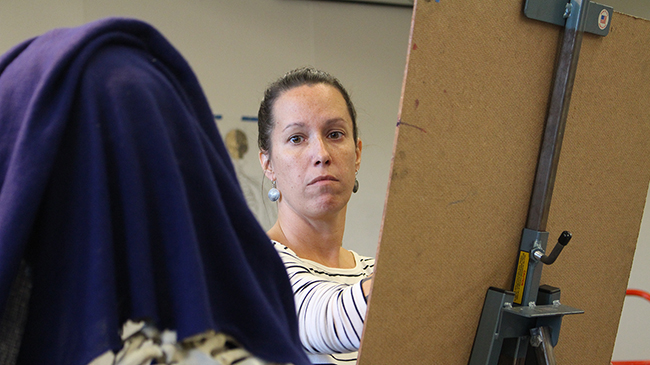 Nicole Navarra, a mother of four, explores body shaming in a portrayal of breast-feeding juxtaposed with unsolicited comments from strangers.

The student artists responded with works that are by turns visceral, confessional, confrontational and inspirational.

There are bold and healing representations of breast feeding in public and menstruation—basic facts of life that women have been trained to experience as dirty or shameful—as well as self-portraits that focus on physical details perceived and disparaged as flaws, but which through the act of drawing are owned and embraced as part of the women’s story, and part of their beauty.

“Our bodies are meant to change, and we shouldn’t be ashamed of that,” said student artist Jessie Martin.

While discussions of body image have centered on women, men are also increasingly impacted by related issues. Advertising also presents unrealistic images of men’s bodies in order to drive the marketing of clothing, athletic shoes, shaving cream, shampoo, cologne and more. The effects among males are similar to those experienced by women, including a lowered self-image, eating disorders, steroid use, depression and interpersonal problems.

As Day explained, the cultural messages related to female body images also impact the way men think about and interact with women, as well as how they deal with other men.

“Our behavior follows our beliefs, attitudes and habits, many of which are shaped by our experience and which manifest in behavior that often occurs without crucial evaluation,” Day said. “Cultural messages that objectify or depersonalize the body may condition individuals to treat others as objects or belittle their personhood.”

According to Day, the organizers hope that this panel and group discussion will help both women and men to be more critical consumers of media images, evaluate the impact it has on their own sense of self, and enhance how everyone thinks about body image issues.

“Instead of feeling deficient, insecure and anxious, young students should feel confident, pursue a healthy lifestyle and invest their energies in productive and creative projects,” Hoelger said.