(NEW ALBANY, Ind.)–The city of Kostanay, in the Central Asian republic of Kazhakstan, is a long way from New Albany—5,882 miles as the jet flies.

But Morgan Szabo ’14 can trace a line from her first international studies class at IU Southeast to the first day she spent in Kostanay, teaching young Kazakhstani athletes about the core principles of the late Muhammad Ali.

Szabo is the School Programs and Group Tours Coordinator at the Louisville, Ky.-based Muhammad Ali Center, home to the educational and cultural organization devoted to perpetuating and spreading the athletic and humanitarian legacy of “The Greatest.”

In August, she journeyed to Kazakhstan as a representative of the Ali Center, as part of a unique cultural exchange program sponsored by the U.S. Department of State that involved the Ali Center and the Kazakhstan Boxing Federation, and celebrated the 25th anniversary of diplomatic relations between the two countries.

The program focused on empowering youth and building strong communities through sports education. In March, 12 young male and female boxers from Kazakhstan—a nation with a long and storied boxing tradition—had visited Louisville. Besides touring the city and meeting other young athletes working in community service, the group had become acquainted with the six core principles of Muhammad Ali: confidence, conviction, dedication, giving, respect and spirituality.

Then, five months later, Szabo and her supervisor Charles Gwinn from the Center spent a week in their country, leading a series of exercises around qualities of good leadership and teamwork, including listening, communication and critical thinking.

In activities ranging from navigating obstacle courses blindfolded with the help of verbal cues from a teammate, to manipulating buckets using ropes and lots of problem-solving, the core principles came alive for the young boxers, not only as pathways to the mental aspect of their sport, but as guideposts for self-determined, successful, collaborative and impactful living. 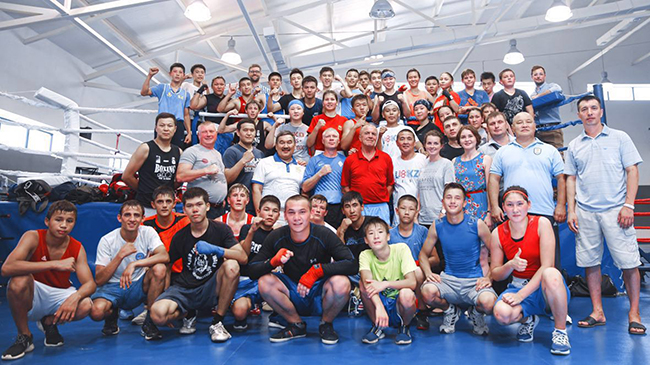 In many ways, Szabo’s journey to the Ali Center and Kazakhstan began at IU Southeast. Initially she had not planned to attend college. But a senior high school math teacher and a close friend had both suggested that IU Southeast would be a great fit, based on Szabo’s curiosity and eclectic interests. On campus, those qualities played out immediately as Szabo enrolled in nursing, switched to business, then gravitated to international studies.

“I realized that first term that I really loved school,” Szabo said. “The first time I ever felt that way was at IU Southeast.”

Living in the Lodges, Szabo came to know students from abroad, and formed strong bonds with fellow residents from Russia and Jordan. Her friendships with Latin American students prompted her to minor in Spanish. This in turn inspired her to study abroad in Ecuador, with Drs. Magdalena Herdoiza-Estevez and Amy Zink.

Now there was no going back, as courses in international political economy and Latin American politics with Dr. Cliff Staten, and international relations with Dr. Jean Abshire deepened her knowledge of world affairs and awakened her desire to contribute to global understanding.

As her focus narrowed, her options expanded.

A reading in micro-credit as an engine of social uplift started the conversation that would ultimately bring her to the Ali Center. A fellow international studies major steered her to the Beaded Treasures project, a woman-owned micro-credit enterprise based in Louisville. Szabo worked there as a program coordinator, and also at the World Affairs Council of Kentucky and Southern Indiana.

“This is where I want to be”

Navigating Louisville’s vibrant and densely networked nonprofit community, centered on social advancement for disadvantaged populations, Szabo found a niche that builds on her strengths and brings them to bear where they are most valued.

She landed a temporary gig with the Ali Center as a facilitator during a partnership with StageOne family theatre, which was performing a play about the young Cassius Clay.

“We worked with about 16,000 students during that time,” Szabo said. “We brought them in from all over the city, and moved them through the exhibits.”

Some may have found the volume and energy overwhelming. Szabo found it an epiphany.

“That was when I realized: this is where I want to be,” she said.

When an offer of the permanent position came her way last November, she seized upon it. Along the way, Szabo has mastered the details of an incredible range of social issues, and the flame of her personal passion for positive change burns the brighter for it. In the education position, she guides thousands of children each month, and supports the Center’s curriculum, which focuses on civics and citizenship, as well as the civil rights movement. The activities might be as simple as scavenger hunts, but they are embedded in big-picture consciousness-raising about applying what has been learned here to the classroom and community. 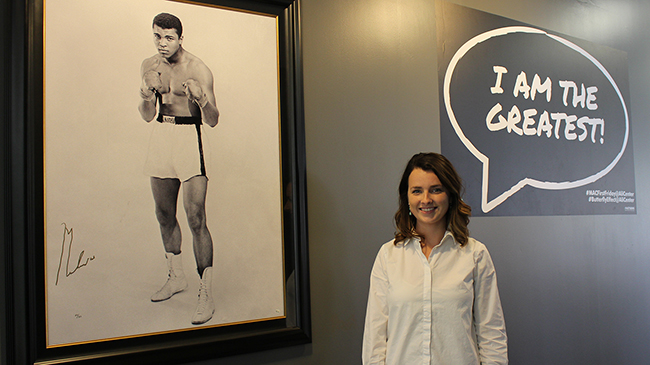 Morgan Szabo transmits the empowering message of the Muhammad Ali Center to youth.

The passing of Muhammad Ali on June 3, and the events of June 10—his funeral procession, burial and public memorial service—were historic moments in the life of Louisville, the nation and even the world, broadening awareness of Ali’s contribution as an athlete and activist.

For Szabo, the memorial tribute that brought together actors, religious leaders, a former president and sitting senator, athletes and family members was a demonstration of Ali’s ability to break down barriers, advocate on behalf of diversity and unify peoples.

“Muhammad Ali was truly a man of the world,” she said, referring not only to his attitude, but also his universal name recognition.

Certainly his passing injected a special energy into her visit to Kazakhstan. Szabo noted that especially the young girls who boxed were at once tenacious fighters and strong characters who were pushing ahead in a very traditional society. To Szabo they seemed to incarnate Ali’s challenge to be fearless inside the ring and in the world beyond it.

That call to global advocacy resonates with Szabo. Whether giving guided tours to groups from abroad, including guests of the World Affairs Council, or partnering with the United Nations to host a “Shining A Light” photography exhibition on girls’ education with submissions from around the world, Szabo is constantly in contact with people, issues and conversations of global relevance. Since joining the Ali Center last year, she has met visitors from Turkey, Israel, Australia, Ireland, France, South Africa and more.

Asked how often she draws upon her international studies background and travel experience in her job at the Ali Center, Szabo was quick to respond.

During the week of memorial events this summer, Szabo personally guided the Ali family through the Center, and welcomed prominent visitors, including the Rev. Jesse Jackson and Louisville Mayor Greg Fischer.

For Szabo it was a moment that brought together the varied strands of her learning and experience.

“Working at the Muhammad Ali Center, I am able to shed light on what it means to bring peace, justice and unity to people from all over the world,” she said. “Even if it may be a small one, I feel like I am able to have an impact, and that’s what counts.”

The Muhammad Ali Center, a 501(c)3 corporation, was co-founded by Muhammad Ali and his wife Lonnie in their hometown of Louisville, Kentucky. The international cultural center promotes the Six Core Principles of Muhammad Ali (Confidence, Conviction, Dedication, Giving, Respect, and Spirituality) in ways that inspire personal and global greatness and provides programming and events around the focus areas of education, gender equity, and global citizenship. Its newest initiative, Generation Ali, fosters a new generation of leaders to contribute positively to their communities and to change the world for the better. The Center’s headquarters also contains an award-winning museum experience. For more information, please visit www.alicenter.org.