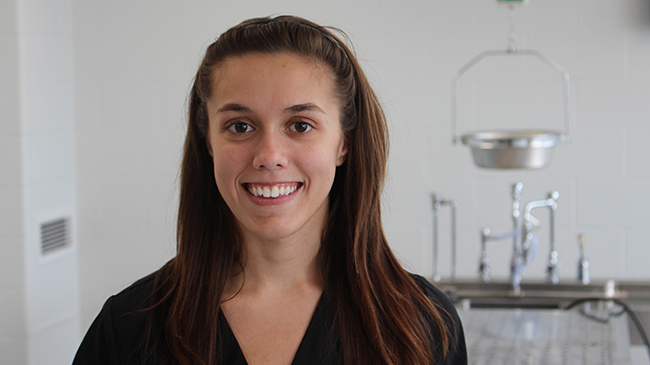 Leah Holsclaw interned as a forensic autopsy technician’s assistant in the Office of the Chief Medical Examiner in Louisville, Ky.

(NEW ALBANY, Ind.)—Leah Holsclaw, a junior majoring in criminal justice, has interned as a forensic autopsy technician’s assistant in the Office of the Chief Medical Examiner of the Commonwealth of Kentucky, in Louisville, Ky.

The internship provided Holsclaw with a sometimes jolting yet always fascinating introduction to the real world of forensic examination.

Holsclaw’s path to the autopsy lab was not a straight one. She had originally intended to study nursing, but came to know about forensics through her father, who had taken a position in the Office of the Chief Medical Examiner. A radiologist by training, he had changed career paths in order to enjoy more regular work hours. Intrigued by his experiences, and driven somewhat by her own morbid fascination with crime novels, Holsclaw changed her major to criminology and criminal justice, taking classes from Associate Professor Bernadette Jessie and Lecturer Joseph Grant.

In her first two years, Holsclaw learned about the history of crime and the justice system, explored different theories and schools of thought about the factors that play into criminal behavior, and acquired a good basis knowledge of policing and forensics.

Holsclaw had been planning on interning at the Office of the Chief Medical Examiner for almost a year, and this summer she took advantage of an opportunity and applied to work with the forensic autopsy technician.

That technician was Kendall Gault, who has taught as an adjunct at IU Southeast for several semesters. Gault had grown up wanting to become an engineer. But when she was in middle school, her father showed her a magazine article about Kentucky’s first female chief medical examiner, Dr. Tracey Corey, MD, and Gault felt empowered to pursue the same path.

She was impressed by Holsclaw’s informed approach and unflappable demeanor.

“Not everybody has what it takes to handle this job,” Gault said.

Indeed, even medical students sometimes fail to make it through the initial interview, during which candidates observe a real autopsy.

Some pass, and some pass out. Holsclaw passed.

We’re not on “CSI” anymore

The Office of the Chief Medical Examiner receives deceased individuals. Some are victims of natural disease, accidents and other scenarios, while others will have been identified as victims of a crime. It is the job of the forensic autopsy team to examine the body for evidence that will help to identify the cause of death, the way in which the person has died and any other factors leading to the death.

According to Gault, the team’s work is situated in the middle of the investigation process. Some preliminary investigation has already been done, and the information gained there helps the forensic autopsy team with its own examination. In the autopsy room, Holsclaw’s main job was to assist Gault.

The position is certainly not for the squeamish. The cadavers are not cleaned and prepped like in medical school or on “CSI” or one of the numerous other TV crime shows to feature forensic examination. Rather, they bear the visible signs of the very recent acts of violence or misfortune that brought them here. They are bent, broken, contorted, violated. Sometimes showing hints of a final thought, sometimes physically incomplete or beyond recognition.

According to Holsclaw, the most common causes of fatalities she saw were drug overdoses, motor vehicle accidents and gunshots.

She set up the cases for the doctors, prepared the toxicology kit used to test for drugs and other substances, brought the bodies out of the cooler and weighed them, and set up paperwork related to each case. Then during the autopsy, she wrote down the weights of the organs (heart, lungs, liver, spleen, kidneys, brain) before the doctors cut into them and removed tissue samples.

“All of this helps us show if there are any abnormalities or trauma inside the body,” she said.

Afterwards, she cleaned up the table and area to prepare for the next cadaver. This in itself was a laborious process that required a special attention to detail, and a certain degree of fortitude.

Sometimes, she had the opportunity to help the crime scene unit (CSU) techs collect evidence such as blood samples, pulled head hair, clothing and fingernail clippings.

Not a common finding

Gault considers the internship an extremely unique placement, and one that could launch students in a variety of different directions.

“Having direct exposure to investigations and evidence collection and chain of custody is not a common finding among people applying for their first job in a career in criminal investigations,” Gault said.

This makes the skills learned in this role useful for positions ranging from autopsy, crime scene or lab technician, to crime or drug usage statistical analyst, and even to positions in the police force, medical environment, as well as anthropology work relating to the analysis of human skeletal remains, and of course forensics.

The internship could also be attractive and useful for premed students.

“Students who work in our type of environment prior to matriculating into medical school may gain a coveted comfort level with general anatomy, medical terminology and pathology that could make the first year of med school significantly less daunting,” Gault said.

The fragility of life

There was so much to do, in such a short time, and the need for focus was so great, that Holsclaw had little opportunity to process what she was seeing.

“With the amount of death you see with this position, you have to not let yourself get emotionally involved or attached to the cases, and just view it as a body that you’re investigating,” she said. “This isn’t to say you should have a heart of stone, since it’s impossible to not get upset sometimes, but during that time you allow yourself a minute to be upset, then move on with the case.”

When she did have time to reflect, Holsclaw was left to wonder at the tenuousness of life.

“Seeing the state that bodies come to us in shows how fragile we are,” Holsclaw said.

On one hand, she values the opportunity to get beyond the books in a field where experience is essential.

“There is really no coursework that can prepare you for this,” Holsclaw said. “Hands-on learning sticks with me and helps to give a better understanding of what I’m doing. The autopsy itself is almost like an interactive, hands-on anatomy class.”

She sees how crucial physical evidence, such as that gleaned in autopsies, can be, and is able to derive a tangible satisfaction from the challenge of finding a significant piece of the puzzle.

“The reward comes in the form of being able to identify how someone died, especially if it’s a murder victim,” she said “The work done at the Office of the Chief Medical Examiner can help aid in cases like that, and assist juries in convicting whoever is responsible for the crime.”

As for the internship itself, Holsclaw’s dedication has left its mark. Gault credits her with paving the way for other interns from IU Southeast, one of whom is already on the job.

With insight comes conviction. Holsclaw says that as a result of the internship she now has a heightened sensitivity to the ravages of drug use, as well as to injustices within society and the criminal justice system itself.

The internship has reinforced Holsclaw’s classroom coursework in many ways. It has exposed her to today’s real-world environment of criminology and criminal justice, from the most basic level of tissue fragments to high-tech tools such as the National Missing and Unidentified Persons System (NamUS), a new online database that is helping Gault’s team address missing-person cold cases from as far back as the 1970s.

At the same time, she has gained “a new way of thinking critically” that sees criminal justice in a much wider context that includes police conduct, social issues and the media.

As a result, Holsclaw now sees herself as part of a CSU team, or even working for the FBI.

“This field can be frustrating, dangerous, and time-consuming, but it strives to help society, which to me is the most important thing,” Holsclaw said.