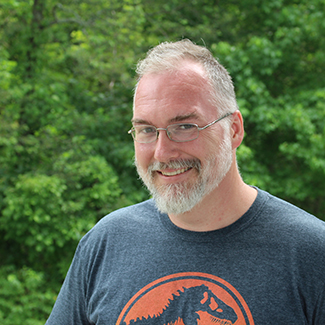 
This story is the first in a series profiling faculty who are bringing innovative strategies to their classrooms. Each month, we will explore the approaches, interventions and teaching philosophy of a different educator at IU Southeast. The series is part of an initiative launched by the Institute for Learning and Teaching Excellence (ILTE) to bring attention to the efforts of instructors to increase student learning, and to share best practices across the campus. ILTE will accept recommendations and self-nominations from faculty and adjunct faculty, and after a review will select eight finalists for a special commendation. At the end of the year, one of the innovators will be recognized with the ILTE Faculty Innovation Award for Teaching and Learning. The award will be announced at a luncheon for all of the faculty innovators in April, 2017 and recognized at the Fall Faculty meeting. The winner will share her or his innovations with the wider campus, either at the ILTE Teaching Mini-Conference before the start of the fall term, or at a workshop scheduled during the fall semester.

(NEW ALBANY, Ind.)—In Knobview 011, German 363/464 (German Cultural History) is in session. This is the so-called “EagleEye” classroom, named for the video conferencing system (Polycom® EagleEye™ Director) that allows students from IU Southeast and other campuses—in this case IU South Bend—to take the same class at the same time. Michael Hutchins, assistant professor of German and international studies, leads a discussion about a 1946 German film that features a love affair between a concentration camp survivor and a former German Army doctor who had failed to stop the shooting of civilians during the Second World War. As the students from both campuses wrestle with issues of victimization, absolution and justice, mostly in German, the system’s cameras zoom in on the speakers, conveying a sense of body language, facial expression and personal conviction to back up the points being made.

Then Hutchins wants to make a point. He steps out from behind the techno-lectern and writes a German word. On a blackboard. With chalk.

A seamless blend of the new and the old. This is the world of Michael Hutchins.

Over the past several years, Hutchins has built a reputation as an early adopter and integrator of innovative teaching technology, largely as a result of his work with the EagleEye Director system.

It was a large investment that has contributed to a growth in the number of students majoring in German.

The EagleEye Director allows Hutchins to offer a broader spectrum of classes to students at IU Southeast, and those at IU South Bend, essentially doubling available upper-division offerings.

While Hutchins holds classes in medieval German literature and poetry, for example, his South Bend colleague Jeff Luppes teaches German grammar and cinema. Students not only have more classes to choose from, but more interesting ones.

Now, acting on a tip from ILTE, he is probing the possibilities of a new platform called VoiceThread. This technology allows asynchronous conversation so that students can develop spoken language skills at their own pace in a threaded format like Facebook. The platform is designed to give students in online classes the benefits of a seminar-like experience, but Hutchins is using it as a conversational add-on for face-to-face classes.

In VoiceThread, a student can post spoken lines, and hear responses from classmates, all at her or his leisure. This is a far cry from enduring rote memorization drills and repeating pre-recorded dialogue in a language lab, the non plus ultra of instruction methodology when Hutchins was learning German.

VoiceThread meets students “where they live,” deepening their engagement with German by allowing them the freedom to determine the level and timing of that engagement.

“It meshes nicely with the student’s everyday practice in their normal lives,” Hutchins said. In the lives of today’s students, digital technology and platforms are seamlessly integrated into communication and interpersonal relationships. To keep technology out of the classroom is to keep the classroom out of the world, to the detriment of both.

VoiceThread also has the capacity to relieve pressure and spur participation.

“The classroom is sort of a pressure cooker,” Hutchins said. “All that pressure is on the students to be so clever. But with VoiceThread, they are able, at their leisure, to contemplate a text they have been reading and comment on it and then interact with other folks who have similar or other ideas.”

But then there’s that chalkboard . . .

It’s an uneasy and almost comical hack for the futuristic EagleEye Director system. Hutchins had rescued it from the garbage heap as a memento of days gone by. He brought it into the EagleEye Director room, which had had to be designed without whiteboards due to limitations inherent in the camera system. He also wanted to liberate himself from the system’s keyboard and ultimately make the technology more effective. Kinetic by nature, Hutchins feels better—and teaches better–when he can move around. It’s almost as if, in this one context, the EagleEye Director needed the blackboard to have the desired impact. And for Hutchins, it’s all about the impact.

As creative and ultimately successful as Hutchins’ integration of technology has been, the chalkboard reveals that it’s only half the story. Hutchins is not a reflexive techie. His approach owes more to McGyver than Musk.

For Hutchins, innovation is not about the adoption of a system or technique, it’s about maintaining a mindset that is open, agile and pragmatic.

There is no pedagogical Holy Grail, there are methods that work or don’t work, more or less effectively, for shorter or longer periods of time. Innovation lies in the ability to know which to try, how to try it, and for how long to stick with it, in order to reach a certain goal.

“I’m kind of like a garage tinkerer,” Hutchins said.

Lesser teachers may view curriculum as a game plan that they execute more or less faithfully for years at a time, according to the maxim, “If it’s not broken, why fix it?” Hutchins comes from a different set of assumptions.

“It’s always broken,” he said. “And it won’t be unbroken anytime soon, because language is messy, and there’s not a formula that works for every student.”

Being responsive to the strengths and weaknesses of individual students is paramount.

“I’ll try anything once,” Hutchins said.

At the end of the day, acquiring a foreign language is a marathon, and attrition is high. So it is absolutely necessary to find ways to keep students motivated.

“Motivation is tied to a sense of autonomy and self-direction,” Hutchins said.

This is not only important for keeping students interested and learning. It’s important for building momentum toward graduation and beyond.

“If you give students a range of choices and also a sense that they can accomplish what they want to accomplish within that range, then that addresses a lot of our concerns about retention,” Hutchins said.

This summer, Hutchins taught a course on the works of the Brothers Grimm. He had taught it before, as a straight-up lit-crit lecture, but this time, he decided to take a more innovative approach. While the “fairy tales” are broadly familiar, they are also historically significant as exemplars of the Romantic and nascent nationalist movements in Germany. Eschewing academic tradition, which he believes has robbed the stories of their visceral impact in order to stress their historical importance, Hutchins took them back to their roots—literally—holding class in the Bernheim Forest, south of Louisville, Ky.

“I wanted to tap into this literature as an enjoyable experience rather than something to be analyzed,” Hutchins said.

That experience brought the students much closer to the world in which the works were created, a world of looming trees, winding paths, mysterious noises and haunting shadows.

”Taking it out of the classroom setting liberated the students to regard the stories in ways that they hadn’t before,” Hutchins said. “We had a lot of fun—and we removed a lot of ticks.”

This approach to language as a living organism may be Hutchins’ supreme innovation.

He is sanguine about German—it’s a hard language to learn in a short period of time. And there are precious few opportunities locally for students to practice and reinforce what they have learned. And it is evolving rapidly, prompting instructors like Hutchins to wonder if it ultimately serves students to learn idioms and sentence structures that will be archaic by the time they master them.

So Hutchins is pondering new ways for students to immerse themselves in the spirit of the language he loves without having to endure the letter of how he learned it.

He envisions taking students out of the classroom for experiential excursions to practice German in environments they already know, like shopping malls. He considers teaching German literature in English translation, so that language skills are not a barrier to appreciating the oeuvre of writers like Goethe, Kafka and Mann. And he’d like to perfect the use of VoiceThread not only for German, but for other courses as well, such as a class in film history.

So how does Hutchins see himself when it comes to innovation? Certainly not as a dogmatist in any one direction, but as a pragmatic thinker and problem solver.

“Polarity edges out innovative ways of thinking, being, doing things,” he said. “When it comes to choosing one way or another way, I’m left out–I’m a dabbler.”