(NEW ALBANY, Ind.)–It was February in the Kom region of northwestern Cameroon, the height of the dry season, and the red dirt road baked in 100-degree equatorial heat.

The Toyota Highlander danced across the dusty ruts, tracking ever deeper into the countryside.

The road led through forests, snaked up hills, wound along the edges of sheer drops, and plunged into valleys. As it passed through villages, children poured from their huts and ran alongside in amazement. For some, it was the first vehicle they had ever seen. Elders, playing board games in front of the village bars, looked up to see who could possibly be driving out here.

At villages such as Abuh, Kikfini and Muloin, the Highlander stopped, and out stepped Victor Waingeh, associate professor of chemistry from IU Southeast.

Waingeh was born and raised in the Kom region. For his return, he knew to hire a driver familiar with the terrain and an SUV with high clearance. But to reach some villages, even the Highlander wasn’t enough, and trekking was required.

In four of these villages, he headed straight for the workshop or office of the local traditional healer. He made sure to  arrive on collection day, when ailing people from the area and beyond had come to obtain personalized cures in plastic gallon jugs.

For them it was a chance to benefit from the healing power of ancient wisdom.

For Waingeh, it was an opportunity to link traditional medical practices with modern scientific methods to benefit both. 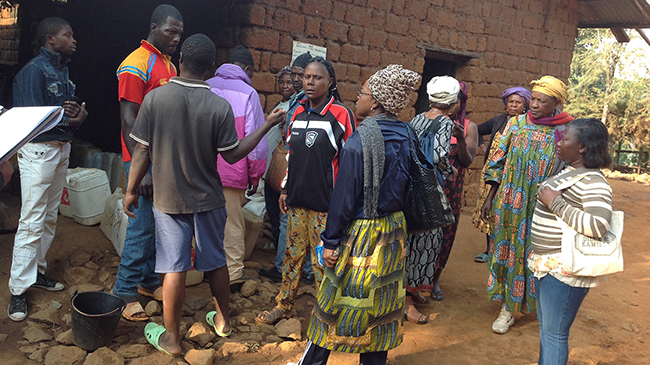 Sickness has no season

Cameroon boasts a modern “Western” medical system of clinics, hospitals and labs in its cities and larger towns. But for many in this largely rural country, traditional healers remain the go-to for everything from toothaches and hemorrhoids to menstrual issues, typhoid, malaria and cancer.

In their village “offices,” the healers prepare herbal concoctions—infusions derived from mixtures of wild plants.

For Waingeh, the arrangement presents challenges. First, while photographs and anecdotal evidence support the effectiveness of some cures, there is no real chemical evidence linking individual active agents to positive outcomes in a clinically reliable way. Some concoctions contain as many as 10 plant ingredients, but it’s anyone’s guess as to which ones are doing the heavy lifting.

“The challenge is to find out if maybe it’s only a single plant in the whole list of plants that is really critical,” Waingeh said. “Or if the individual components of the different plants combine to create something different, or if they work synergistically.”

Secondly, the supply chain is highly irregular. Herbs are collected and used immediately during the rainy season. During the dry season, many of these same plants are withered or dormant, meaning there is no predictable supply or treatment protocol for half the year.

“But sickness has no season,” Waingeh said. “Only plants have a season.”

The challenges are interrelated. Without a true chemical profile of the individual concoctions, the healers cannot standardize or reliably locate their products. And without scales, they can’t replicate their prescriptions. This means they are unable to dry the constituents into properly measured powders for delivery during the dry season, when fresh leaves are unavailable.

For Waingeh, greater knowledge of the chemical make-up of the concoctions will translate into more consistent preparation of medical samples and more measurable treatment.

To address these issues, Waingeh won the trust of four traditional healers and visited their villages, to learn about their procedures and gather the ingredients of their concoctions. These he brought back to IU Southeast for chemical analysis.

Contrary to his expectation that the healers would guard their secrets, Waingeh was warmly received, and granted complete access to their practices, including the special places where they harvest certain plants.

“Some walk five to seven miles to harvest the plants, and spend the entire day in the forest,” he said.

Besides collecting with the healers and their assistants in the field, Waingeh also took samples from their practices and also obtained the actual mixed concoctions. While language was not a barrier, since Waingeh speaks the common tribal language of Kom, the names for individual plants were often derived from local dialect, meaning identification in the field was difficult if not impossible. So a preliminary part of the analysis will involve basic species identification in the IU Southeast herbarium. 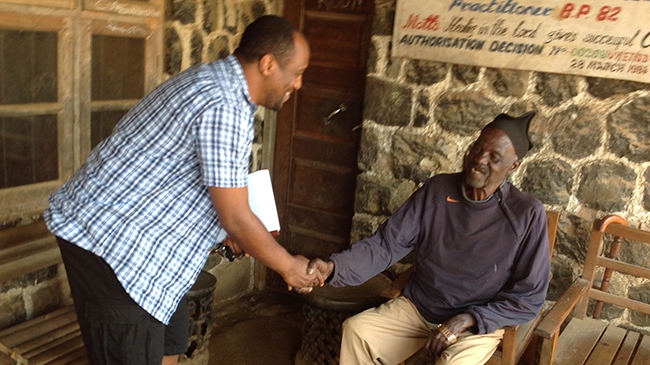 This fall Waingeh is working with student Kenedi Divine to analyze the plants he brought back from Cameroon. Divine has run samples through gas chromatography-mass spectrometry analysis to study the differences resulting from extracting the leaves using water versus another agent such as methanol.

She is also looking at whether chemical differences emerge from different extraction methods, such as boiling for a short time versus non-boiling over a longer time. Finally, she is examining how different storage methods (refrigeration versus room temperature) affect the chemical composition of the extracts over time, which will help to identify factors that influence characteristics such as the potential expiration date of a prescription.

Data is beginning to emerge that will help to answer some of the project’s basic questions.

Does the time of year a sample was collected affect its chemical composition? Does the part of the plant from which the sample was taken—leaf, stem, root—influence its activity and effectiveness? How do the chemicals in plants behave in combination with one another, and are these synergies decisive for the efficacy of the concoction, or are the individual components more important? What do cures for the same illness prepared by different healers have in common?

Waingeh hopes to return to Cameroon during the rainy season, to extend his collecting to different plants and different parts of plants. Already he has met with biologists and chemists at the University of Buea, his alma mater, who are isolating the components of single plants known to cure certain diseases. Their work will help him to exclude what is already known as he grapples with the more complex questions of cures involving multiple plants.

The payoffs of the research are significant.

On one hand, it may offer greater support for traditional medicine and its important role in the healthcare matrix of Cameroon by leveraging the benefits of Western science in ways that enhance the benefits of the traditional approach for rural patients.

In Cameroon, Waingeh explained, Western medicine already accepts traditional medicine, and many partnerships are underway that integrate traditional approaches into science-based practice, or to supplement western treatments with traditional wisdom. But western methods are not well integrated into traditional practice. By standardizing the knowledge base of traditional Cameroon medicine, and introducing the concept of quality control, Waingeh’s work is a first step in that direction.

Waingeh also confessed to a social urgency to his work. While the current generation of healers is aging, there is no guarantee that its work will be passed on to the next. In fact, the younger generation does not appear inclined to step into those shoes. Waingeh fears a brain drain from traditional medicine, which would be catastrophic for the delivery of health care to rural populations, and also result in the loss of indigenous knowledge reaching back hundreds if not thousands of years.

The signs of decline are everywhere. The healers’ buildings are literally falling apart from neglect and deferred maintenance. In many cases the healers are simply too old, poor and busy to address repairs. With a pay-as-you-can or donation system in a relatively poor countryside, the healers can’t afford to improve or even maintain facilities.

“I was surprised to see 30 to 40 people in the waiting room, and yet the healer has no money because he’s not charging like a hospital, even though the building is collapsing,” Waingeh said.

Interestingly, at one practice, Waingeh noticed one of the cured patients taking up the role of apprentice under a healer who had been dispensing cures for 40 years, learning all that he could, as fast as he could.

Solving the social problem of generational transition is far beyond the scope of Waingeh’s work, yet by capturing the chemical language embedded in traditional indigenous practices, and setting up protocols that anyone can follow, he is contributing to the preservation of intellectual capital in his native country.

Homepage photo: In the backyard farm of Bobe Mathias Tim in the village of Alim, Victor Waingeh inspects fruit known in French as “mille maladies,” whose seeds are said to be useful in the cure of a thousand different diseases and ailments. Photo courtesy of Victor Waingeh.