(NEW ALBANY, Ind.)—Last month the discovery of a Tyrannosaurus rex fossil in Montana made headlines around the world.

Laura Swessel, adjunct lecturer in physics at IU Southeast, had advance notice—she helped to excavate it.

Swessel was one of 30 educators selected this year to take part in the Discoveries In Geosciences Field School (DIG) of the University of Washington’s Burke Museum, based in Seattle, Wash. The selection was based on experience, a series of essays and letters of recommendation.

The DIG school is a nonprofit program that takes a small group of K-12 teachers on field research with University of Washington/Burke Museum paleontologists to investigate the extinction of dinosaurs and the rise of mammals. Its mission is to connect STEM teachers with scientific research and researchers through ongoing professional development and teaching curricula.

Swessel can use this experience at both the K-12 and college levels. Besides her physics courses at IU Southeast, Swessel teaches physics, earth/space and scientific research, as well as STEM summer camps at nearby Our Lady of Providence Jr.-Sr. High School in Clarksville, Ind.

In the DIG program, Swessel and her colleagues spent the better part of a week in the Hell Creek badlands in northern Montana. Prized for its impressive fossil wealth—the first and most numerous T. rex fossils were found here—the Hell Creek formation is the most-studied place on Earth for understanding how dinosaurs went extinct, according to the Burke Museum. 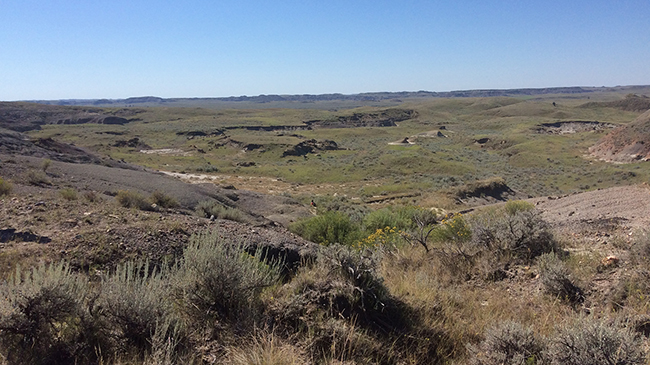 The Hell Creek formation in northern Montana, a treasure trove for paleontologists. Photo by Laura Swessel.

For the first two days, they learned tasks that are basic to the work of a geologist and paleontologist, using several locations within about 75 miles of the base camp. They learned to use a Mercator GPS to find existing sites or record the location of a new site, immersed themselves in field notebook syntax and protocols, graphs, diagrams and other documentation techniques, and created geologic stratographs of the rock layers below, at and above the level of a find, in order to estimate a fossil’s age.

They also learned how to prospect for microfossils (those under three inches in size) in order to document the life that existed before, during and after the animal being excavated. This helps to gain insight into the ecological context in which creatures such as dinosaurs lived, and provides clues to climate, foods and even behavior.

“It’s amazing that after 66 million years, you can piece together a historical timeline from the clues left behind in the sediment and rock formations,” Swessel said.

On the third and fourth days, Swessel and the other novices were turned loose to practice their newly won skills on a new excavation.

They soon learned that they would be working on a T. rex. Perhaps not surprising, given Hell Creek’s reputation, yet still exciting, given the rarity of T. rex finds. And it was soon apparent that this wasn’t just any T. rex. There was a cloak and dagger aspect to the whole operation.

“The scientists kept the find a secret until we literally walked up on the dig,” she said. “We did not know where we were going during the entire 2.5 mile hike from the vehicles to the site.”

The fossil had been found earlier in the summer by two Burke volunteers—Jason Love and Luke Tufts—and quickly named after them with some glee as the “Tufts-Love” T. rex.

Over the summer, teams from the University of Washington and DIG schools excavated the find, estimated to comprise 20 % of the dinosaur, including skull, vertebrae, ribs, hips and lower jaw bone. 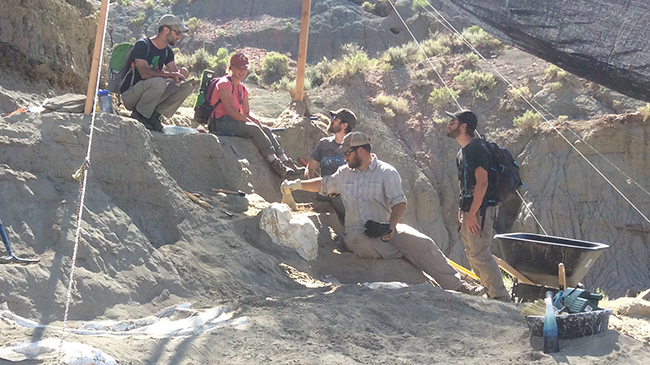 DIG Field School teams and paleontologists from the University of Washington carefully excavated and packed the fossil remains of the Tufts-Love T. rex. Photo by Laura Swessel.

In addition to applying the skills learned in the DIG program, Swessel and the other educators helped to haul out sediment from the site, partly to clear the area and partly to gather samples for further study of the environmental conditions that prevailed during the dinosaur’s lifetime.

According to the Burke Museum, the Tufts-Love T. rex is 66.3 million years old, having lived and died towards the close of the age of dinosaurs roughly 65 million years ago. Just 15 years old when it perished (the species had an estimated lifespan of 25-30 years), it was as long as a city bus from head to tail, roughly 85 percent of the size of the largest T. rex ever found.

When the section of rock containing the fossils was freed, the skull and other bones were sealed in a protective plaster jacket—like a leg cast—for shipment, and sent to the Burke Museum, where over the course of the next few years, the skeleton will be liberated from the remaining rock surrounding the bones. 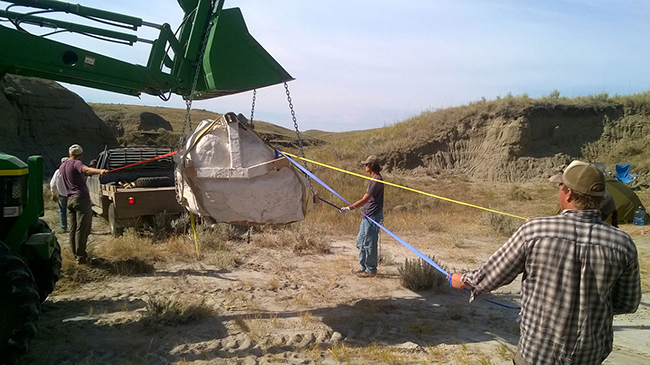 Paleontologists prepare to remove plaster-encased fossil fragments of the Tufts-Love T. rex from the dig site in Montana and transport them to the Burke Museum. Photo by Dave DeMar. Courtesy Burke Museum.

Swessel has worked for 20 years as an engineer in the aerospace, automotive, appliance and healthcare fields, holds a patent for a satellite fuel gauge and was a four-year starter on the M.I.T. softball team in undergrad. This diverse background has served her well in her 12 years of adjunct teaching at IU Southeast, giving her countless real world stories to draw on as she brings physics to life for her students. But this summer’s excavation holds a special place.

Quite apart from her awe at the Big Sky landscape and the thrill that comes from mastering skills in a new discipline, Swessel is pleased to have contributed to such an important find.

“The most gratifying aspect of my experience with the DIG school is knowing that my field book and several of the pictures I took will be part of the official record of a T. rex discovery,” Swessel said.