(NEW ALBANY, Ind.)—Every year at Commencement, Dr. Diane Wille, dean of research and professor of psychology, counts the number of psychology students walking across the stage to receive their diplomas.

Lately the numbers have been ticking upwards, and by significant increments. The B.S. in psychology program has gone from zero to 54 students in just five years, driving the total number of psychology degrees awarded from 44 in 2010-11 to 84 in 2015-16. In that same time period, the number of majors has risen almost seven percent, from 368 to 450, outpacing other departments and the university as a whole.

For Wille and her colleagues, the numbers confirm that steps they have taken in recent years to support student persistence and success are paying dividends for both students and the university.

A vision for student success

“In psychology, we’re all quantitatives,” said Dr. Donna Dahlgren, professor of psychology, director of the first-year seminar (FYS) and the new dean of student success and persistence. “We try to be responsive to the data in everything we do.”

That data shows unequivocal, significant and sustained improvement in retention and graduation rates for psychology majors.

Being responsive to data is certainly a big part. It has allowed the department to build on successes by monitoring and supporting positive trends, tweaking programs and proactively allocating staff and resources where they can help students maintain momentum toward graduation.

But it all started with faculty, as a group, asking itself a basic question: how can the department help its students get through more quickly and achieve the career goals that they want?

The answer was a series of moves that worked synergistically to create a culture of deep and structured investment by faculty in persistence and completion, with a big emphasis on constant contact beginning with the freshman year.

In fact, it’s fair to say that the entire structure of the psychology department—from the degrees offered and the sequence of courses to faculty teaching schedules and the monitoring of outcomes–is built around its vision for student success. 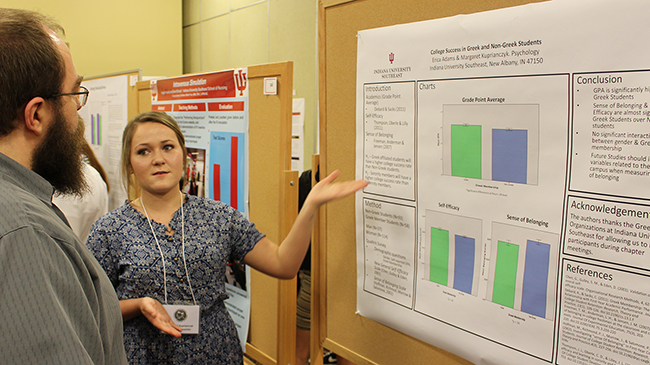 There are four basic pillars of psychology’s persistence mindset.

The first is the First Year Seminar, a structured progression of work that acclimates students to college-level work, acquaints them with their professors and campus resources, and introduces them to academic rules. At the same time, students take foundational courses taught by the most experienced faculty on the team.

Senior faculty involvement is by design. Not only does it demonstrate the investment of the department in the new students, it also gives the faculty a familiarity with the majors.

“That helps us educate them about the things they need to be doing to move along the path,” Dahlgren said.

Another pillar is called Pathways. It’s a class that takes place in the second semester of the first year, and is designed to encourage majors to begin thinking of their career in the field. At this point, they may be prompted to consider differences between clinical or social service routes, for example. They learn about degree maps, and take a more strategic approach to their combination of classes to enhance skills specific to their desired goals.

The class is taught by professional advisors, and invites panels of local professionals in the field to share their real-world experience.

Angela Parker, branch manager of the Strategic Planning Branch of the Kentucky State Police in Louisville, Ky. was one such panelist. She shared insights into careers in law enforcement, and introduced the students to potential avenues they may not have considered, such as policy writing, audio/visual production and lab sciences.

“Students really must consider how productive their course selections will be in advancing them toward their ultimate goal, which should be attainment of knowledge, skills and credentials that will help them live a happy and self-sufficient life,” Parker said. “No one wants to get to the end of his or her academic education and discover that the field of study he or she has pursued has very little to do with a career that is attractive and available.”

The career focus helps students stay focused on the ultimate goal amid the flurry of everyday coursework. Once the students reach upper level they are required to take P199, a dedicated psychology-specific career development course that uses a textbook created by Dr. Bernie Carducci just for this purpose. It’s a deep dive into the different areas of psychology and what is needed to succeed in each. At this point in a student’s path, he or she has the foundational knowledge to gravitate to a desired area, but still has time to change if a more attractive option presents itself.

One of the most important pillars of persistence has been the addition of the Bachelor of Science program.

This was a response to student feedback that indicated a desire to add higher level math and lab sciences, to enable graduates to move into lab work and graduate research.

The B.S. program had another benefit. It enabled the department to make research with faculty a requirement, rather than an option.

The ability to do real research as an undergraduate is something that has come to be known as an IU Southeast trademark. It builds discipline-related skills immediately, opens doors to more sophisticated and challenging material, gives students a taste of the profession and is an excellent resume-builder for graduate school.

It also makes students more likely to persist to graduation.

Knowing this, the psychology department has moved to involve students in research sooner, and to require them to present their research at student conferences and even professional gatherings such as the Midwestern Psychological Association annual conference in Chicago.

“The design of our degree makes it so that students become aware of things early, so they have time to see who is working on what, and can be part of it, instead of beginning to think about it in the senior year, just before they graduate, with very little time to get the research experience they need,” Dahlgren said.

Know thy students—and thy numbers

Degree in Four is the final pillar of psychology’s success. Now in its fourth year, it’s a scholarship program that identifies high-achieving students who declare their intention to major in psychology and pledge to graduate in four years. In exchange, they receive $200 every fall and spring semester, and receive the same priority scheduling as seniors. Dahlgren recruits them individually, and maintains contact throughout their four years at IU Southeast, including twice-yearly socials that give the entire group a chance to share experiences with one another and faculty.

There is no binding obligation to graduate in four years, but nearly all students who make the pledge and benefit from the program actually do. The numbers show that the program is helping persistence.

One such success story is Cara Young, a 2016 Honors graduate working as a communications coordinator with the 55K Degrees collaborative in Louisville, Ky.

As a first-generation student, Young lacked people in her life who could guide her through college or give insight into what to do with her degree. Degree in Four provided access to professors and advisors who could deliver that kind of perspective.

“Talking to these people and explaining my interests helped me clarify my goals for myself, and made my job search easier in the long run,” Young said.

Besides connections and resources, Young values the personal impact of faculty involvement and the opportunity to conduct research into memory.

“To me, the biggest strength of the Degree in Four program is how it facilitates social accountability and support in the lives of students,” Young said.

The success of the psychology department’s model has attracted interest across campus, and Dahlgren has been working with other schools and departments to help them build similar programs. For example, the School of Business is launching its own Degree in Four cohort this fall.

The combination of personal investment over time and scrupulous data analysis has paid off for psychology in the form of more students who finish on time and are better prepared to pursue their next step.

“All along the way we have many different touch points where we can keep students on the path and make sure they’re going in the right direction,” Dahlgren said.