The impressive artwork of the two undergraduates has been accepted into two national exhibitions.

“I’m thrilled that artwork from the ceramics program is being recognized at the national level,” said Brian Harper, associate professor of fine arts and ceramics area coordinator at IU Southeast. “These are both juried shows, not invitationals, which shows that Sam and Dallas’ work is standing up to national judging.”

Chumley, of Corydon, Ind. had three pieces accepted into the fifth annual Nebraska National Undergraduate Juried Art Exhibition to be held at the School of Art, Art History and Design at the University of Nebraska in Lincoln, Neb. from Sept. 2-23.

Chumley’s work was selected from among 250 entries.

The pieces accepted into the show, including “corn bottle set” and “basket,” are wood-fired stoneware with atmospheric ash glazing with underglaze image transfers.

“Essentially the atmospheric effects of the kiln create the intricate surface that happen with the pots, and that surface interacts with the images to create all of the visual effects that are seen,” Chumley said. 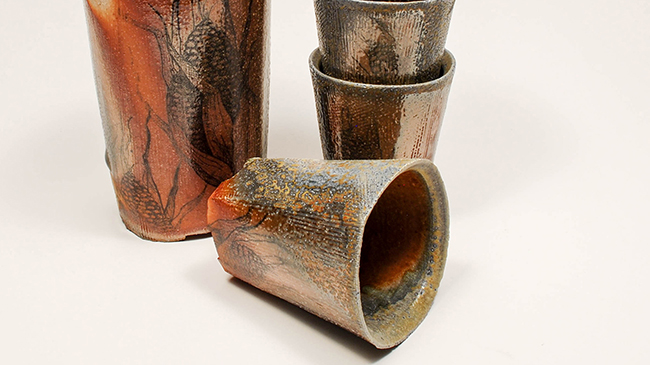 Chumley has been a practicing ceramic artist for about four years, he said, having gotten hooked on clay at IU Southeast after many years as a tattoo artist. That two-dimensional legacy lives on in the drawn imagery that adorns the ceramics.

“This is a great vote of confidence,” Chumley said of being selected. “It’s nice to be accepted beyond the confines of our program, and to see that other people enjoy the work and can pull something from it.”

Wooten, of Clarksville, Ind. had three pieces accepted into a national exhibition entitled “Irons in the Fire: the Many Faces of Iron in Ceramics,” to be held at the Companion Gallery in Humboldt, Tenn. from Sept. 9-30.

Wooten’s work was selected from among 400 entries.

His works of polished elegance and ethereal linearity are very different from Chumley’s earthy, elemental and functional ceramics. 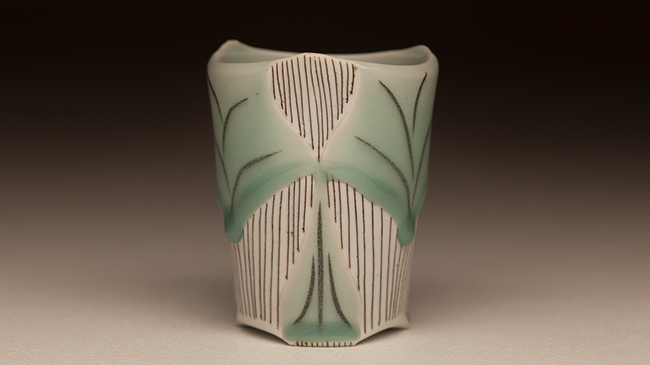 Wooten has been working in clay for about six years, finding his calling after hopping around between drawing and sculpture. Whereas Chumley “reverse engineers” his ceramics from the idea of the finished product, Wooten starts with a somewhat inchoate form and pursues its logic to the ultimate end. Like Chumley, he attends to the sensory quality, in his case varying the surface with differing textures such as inlay and braille-like irregularities, to create a surface that invites the viewer to touch it.

“Ceramics as a discipline is so versatile and varied, really everything from performance to a coffee mug, and that sometimes makes it hard to gauge how well you’re doing,” Wooten said. “Recognition like this is beneficial, because it tells me I’m doing something that feels right, and it gives me the confidence and motivation to push it further.”

That motivation benefits the entire program, according to Harper, who describes the ceramics studio as a collaborative environment in which artists share space, materials, management of the kilns and creative inspiration. Individuals feed off the group dynamic and so the group feels a connection with the individuals’ success.

“Being recognized at the national level is great for Sam and Dallas, in terms of exposure and name recognition, and it also helps connect them to the broader field of ceramic art,” Harper said. “That connection will pay huge dividends as they progress through their careers.”